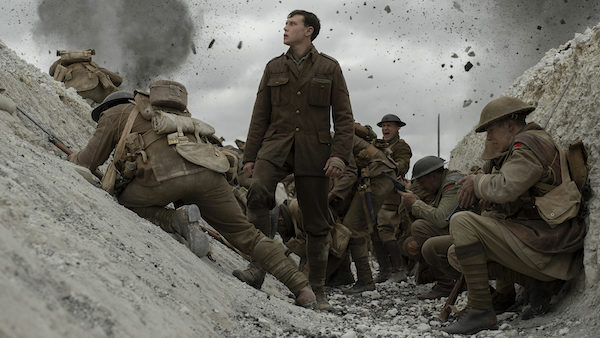 Many moons ago, when we were sitting around a Dallas office discussing the sorts of movies that might be included on The REBELLER Canon, we faced an interesting choice. Under consideration were Midway, the big-budget CGI spectacular from the guy who made Independence Day, and 1917, Sam Mendes’ single-shot trek through the trenches of World War I.

It was hard to say for sure if their inclusion made sense because we hadn’t seen either of the movies; we were just trying to get a sense for their aesthetics and how they might mesh with ours. But our gut told us that 1917 was more our style: It undoubtedly has some CGI in it — most everything does these days — but from the ads it didn’t really look like a video game.

Most importantly, though, it is the expression of a singular vision, a remarkable bit of filmmaking that bears the stamp of its creators on it. It has Mendes’ slightly weary heart beating inside of it; it has cinematographer Roger Deakins’ immaculate sense of light and shadow. It is clever and crafty and immaculately stitched together, telling a personal story amidst immense horror.

When I finally got a chance to see 1917, which expands to theaters nationwide this week following its triumph at the Golden Globes last weekend, I was pleased to see that our gut reaction was right (for the most part). 1917 is harrowing and gripping, though the film’s central gimmick — it is constructed to look as if it is two very long takes, split apart by a moment of unconsciousness from the point of view of one of the leads — occasionally works against its goal.

Lance Corporal Blake (Dean-Charles Chapman) and Lance Corporal Schofield (George MacKay) are given a seemingly impossible task: They must cross the no-man’s land between the trenches in order to warn a British regiment that the seeming German retreat was just a retrenchment. If a planned attack goes ahead, countless soldiers will be lost.

Simple enough. The tension comes from the manner in which Mendes has directed this picture. The camera stays on Blake and Schofield throughout, tracking their movements as they pick their way through barbed wire and clamber about bombed-out craters filled with enough water to drown a man and stick their hands into the occasional corpse. The continuity serves a pair of purposes: It gives us a sense of space, helping us understand how far on their journey they are and how short was the distance between the immovable lines that killed so many; and it ratchets the tension up, refusing to offer a release from the mounting pressure. By the time an airplane comes crashing toward our heroes, you feel yourself practically pulling away from the screen since we have served as their silent companions this last hour or so.

As a viewer, this is all pleasurable enough and effective. As a critic — as someone who knew the gimmick ahead of time and was aware of what exactly Mendes and Deakins were trying to do — it was oddly distracting. This stylistic tic is designed to draw you into the picture, to immerse you within it. But I found myself spending the whole time looking for the seams, finding the moments where they hid an edit. Every time a camera started moving, I was just waiting for the point at which it would pass entirely across a back or a wall or something else so Mendes and Deakins could mask a cut.

It’s a minor quibble, one that most people probably won’t notice. The further I’ve gotten from the film, the less I’ve thought about that and the more my mind’s eye has been drawn to the second-half descent into Hell, as flares harshly light the battlefield and burnt-out buildings cast shadows within which our hero can hide from enemy troops.

And, frankly, it’s just nice to see an action movie that’s a little different in theaters — something a bit more personal and a bit more pressing, where the stakes are a bit smaller but all the bigger as a result.