2019's Best Action Movie Might Have Come from the African Slums 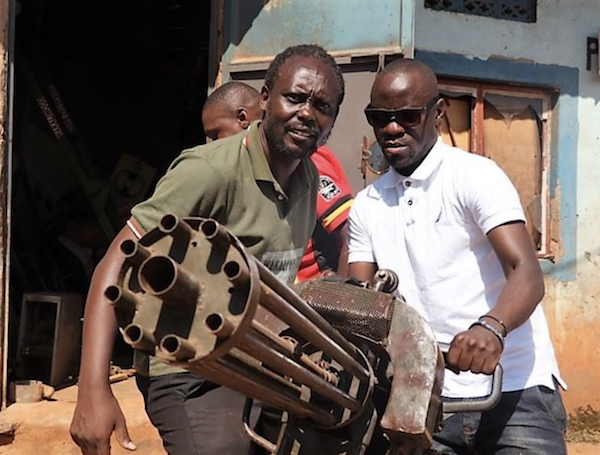 2019's Best Action Movie Might Have Come from the African Slums

hat would you say if I told you right now that the best action movie of 2019 was free to watch online? Not only that, but it was made for about $200?

That movie is Bad Black. It’s from Wakaliwood, which isn’t unknown, exactly — The Guardian and the AV Club have both written about it — but too few people are aware of the wonders of this small movie studio and its collection of the world’s silliest action movies. The studio began as the brainchild of Isaac Godfrey Geoffrey Nabwana, who has lived in Wakaliga, a slum of Kampala, Uganda, his whole life. He grew up hearing about American action movie stars like Chuck Norris and Arnold Schwarzenegger only to feel that the movies didn’t live up to the hype when he finally had the chance to watch them. Enthused by the idea of those movies, however, he sold most of his possessions, purchased a camera, and started shooting action movies with the help of his neighbors and immediate family.

Though amateur in execution, Nabwana’s movies demonstrate a surprising effectiveness. Despite lacking money, his films all include CGI, martial arts, car chases, and shootouts. He’s spent the better part of a decade learning how to use his tools, and the work speaks for itself: Wakaliwood has become an immensely popular phenomenon in his home country. And the studio has gone worldwide since he started selling copies of his movies on the internet with the help of American producer Alan Hoffmanis, who has become the public face of Wakaliwood.

I’m frontloading all of this information, because just watching a Wakaliwood film cold would not set the proper expectations. At a glance, these movies are hilariously bad and amateurish. Knowing the drive, ambition, and capabilities of filmmakers making no-budget action films without professional experience gives you the proper curve on which to grade them. They’re absurd, but they revel in their own existence because they shouldn’t have any means to exist.

Their newest film, Bad Black, is a clear example of this. It’s the second of now four films that Wakaliwood has released online following its breakout movie, Who Killed Captain Alex? Of the two films, the first is the purer experience: The plot is so thin that it just becomes an excuse on which to hang its bloody “supa-action.” The elements barely fit together, but they’re there because they’re entertaining.

Bad Black takes all of this awesome action and adds a somewhat tragic story. We meet a young orphaned girl who ends up on the streets of Kampala only to fall into the hands of a crime lord who takes what she panhandles on the streets. When the crime lord murders one of her friends, she takes revenge on him and kills him in cold blood, which sets her on a journey to becoming Bad Black, one of the most influential crime lords on the streets, years later. Meanwhile, Alan Hoffmanis shows up playing a Western doctor working in Uganda who gets trained by a young boy named Wesley Snipes on how to become a “Commando,” an all-purpose mercenary/martial artist wannabe on a mission to retrieve his “dog tags,” which were stolen by the titular character. It all builds up to a ridiculous plot twist reveal that the movie itself mocks. It’s also awesome! It’s the kind of plotless, nearly pornographic and violent action movie that Hollywood just doesn’t make anymore.

Old-school action movies have a habit of getting labeled as disreputable by professional critics.

Sadly, not everyone is okay with Wakaliwood. The Ugandan government isn’t fond of the movies for the way they portray the country as a blighted violent slum while they’re trying to draw investments from major corporations. Much like Cannon films before them, Wakaliwood has also earned its fair share of negative criticism from critics who find the studio’s work culturally damaging. Hoffmanis has told stories of being criticized by stodgy professional filmmakers and critics who say the work he’s doing is damaging to the public perception of Africa, that by portraying the continent as a war-torn, violent, and downtrodden place, it perpetuates negative stereotypes.

The criticism is neither fair nor new. Old-school action movies had a habit of getting labeled as disreputable by professional critics: The New Yorker’s Pauline Kael excoriated Dirty Harry as fascist; the Death Wish movies are oft dismissed as fascist; basically all action movies are fascist. There’s always a layer of snobbish disregard in this criticism. And anyway, these movies were responses to the chaos and disorder of the 1970s. Watching Clint Eastwood and Charles Bronson blow criminals away was a populist cry for order, one that resonated with a people surrounded by crime and domestic terrorism.

These conversations are always strangely provincial. Just look at the success of Joker. In America, that film was derided as drowning in “white” anxieties and “incel” sympathies. Meanwhile, in the real world in Hong Kong, protestors started dressing like Joker to mock their Chinese oppressors. When the critics talk about Wakaliwood in the same way, they’re similarly missing the point. These movies are authentic artistic creations created by Africans who want to sell their films on the international film market. People of all nationalities watch action movies like this for the escapist fantasy. They want a few hours of order in the chaos of their lives.

Wakaliwood has taken up the mantle of fun, mildly misguided, and proudly reprehensible action movies with style. The studio became an international phenomenon totally on its own terms and built a small empire based solely on enthusiasm as well as a morbid desire for wanton destruction. And, as of Dec. 21, both Bad Black and Who Killed Captain Alex? are free on YouTube. You should check them out if you’re in the mood for something a little bit silly and a lot of fun.

Tyler Hummel is a freelance film writer who’s work has appeared at Geeks Under Grace, The Ed Blog, and The Daily Wire.