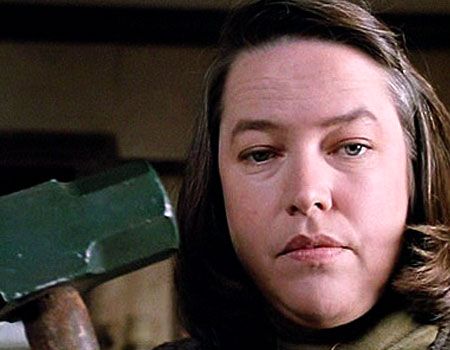 grew up without a history or a culture of my own. Film filled that void, became my religion. The cinema was my place of worship, VHS tapes my hymns, FANGORIA magazines my Bible.

After I released my first film, I made a concerted effort to be a part of the internet film community. I felt like I have finally found my flock. I’ve engaged online with some of my heroes like Barbara Crampton, Brian Taylor, Vincenzo Natali, Mark Hamill, and Dwayne Johnson. I’ve had insightful conversations with other film lovers, received positive feedback from fans of my films, and had both constructive and harsh criticism from others.

But lately it seems that online film conversation is degrading. Massive groups of fans and film influencers are demanding that movies be banned, directors be fired, actors be recast, characters be redesigned, have more lines, more screen time. They deeply feel like they are entitled to these changes.

And then it hit me. They sound exactly like Annie Wilkes from Stephen King’s Misery.

Annie is the ultimate book nerd, totally passionate and committed to her favorite franchise of novels. After she rescues her favorite writer Paul Sheldon, she fangirls out. But when she discovers that Sheldon intends to kill off her beloved character Misery, Annie is incensed. How can Sheldon do this to HER character? Misery DESERVES better! Annie eventually dictates the type of story she wants for Misery, torturing and bullying the author until he writes the tale that she wants. Because apparently, she knows Misery better than the author does.

Annie Wilkes — created by Stephen King in 1987; brought to life by Kathy Bates in 1990 — is the embodiment of toxic internet film fandom. And although Paul Sheldon destroys the book Annie made him rewrite and reclaims his own characters, artists are frequently losing in the real world.

When the Sonic the Hedgehog trailer was released, the hive-mind decided that the video game character didn’t suit their vision and demanded he be changed. Other examples include the casting decisions of The Witcher, the amount of dialogue Margot Robbie had as Sharon Tate had in Once Upon a Time … in Hollywood, a similar controversy over Anna Paquin’s dialogue load in The Irishman, and accusations that Sausage Party was somehow unacceptably offensive.

Then there are armies of insipid trolls who forced the talented Kelly Marie Tran off Twitter because they didn’t like her character Rose Tico in The Last Jedi. And, on the other side of the coin, there are those who reprimanded J.J. Abrams because they didn’t think Rose got enough screen time in The Rise Of Skywalker, literally bringing a stopwatch into the theater to add it up.

When Director Tony Giglio released the entertaining video game adaptation DOOM: ANNIHILATION this year, he received death threats from fans of the game, outraged that his version didn’t meet their expectations and featured a <GASP> FEMALE lead character (Amy Manson, who kicked ass in the role). Criticism is one thing, but threatening the life of an artist is totally abhorrent.

There are even online petitions signed by millions of “fans” to remake the last season of Game Of Thrones with quote “competent writers.” Are we really going to pretend the showrunners that gave us The Red Wedding and The Battle of the Bastards aren’t talented?

Some zealots are trying to take it further, demanding that smoking, drugs, firearms, nudity and violence are removed and banned from films. It conjures the image of some Winston Smith-like editor at Netflix, whittling down films and TV shows until they appeal to the narrow minds of the self-appointed “moral majority.”

Maybe some of these criticisms are valid. I for one was totally down to see ugly Sonic and his fucking weird human teeth, even if his redesign looks more in line with the games. But I resent the idea that fans should dictate to producers, writers and directors what a film should be. Film isn’t a democracy. It’s an art form.

It’s strange to have to say this, but films don't actually owe you anything. Even if you love characters, you don't own them or deserve to have input into what they say, how they look, what race the actor portraying them is, or how it ends. If you are offended, you can't have something banned. You aren't entitled to anything apart from a few hours of moving images. You could argue that you are entitled to at least be entertained, but that isn’t strictly true. In 2016 a filmmaker released PAINT DRYING, a 10-hour movie just showing white paint on a wall as a protest against the British Board of Film Classification (PAINT DRYING currently has 9.3 stars on IMDB).

Whether it’s a songwriter, a director, a writer, a showrunner or a producer, the creators are gods of the worlds they weave. These are our stories, our characters and our voices. People spend years of their lives working on a film so you can pay a few dollars to half-watch them while playing on your phone, then join the internet hive-mind of other outraged fans in a mindless cacophony of misguided venom and hate.

I’m not saying you shouldn’t be allowed to express opinions or criticize art. I’ve had extremely positive and negative reactions to my films, and I cherish both. Strong reactions are great. My favorite reviews are those which help me grow as a filmmaker. You are totally free to speak out about movies you hate, characters you dislike, songs that grate on you, paintings that you think your six-year old could create. But you don’t get to demand that creatives change their art, force them to apologize for their decisions, re-edit films, rewrite characters. You don’t get to demand that art should be banned, or that the artists should be “canceled.”

You don’t get to rewrite our stories like crazy Annie Wilkes, and hobble filmmakers when their vision doesn’t match your own. You can’t bully creatives with rabid internet pile-ons every time you aren't happy, lazily jumping on the latest hashtag for attention. How about this as an alternative: Instead, go out there and tell your own stories. It’s an incredibly hard job putting your voice out there, exposing your hopes and fears, showing a part of your soul and having it picked apart and scrutinized by masses of strangers. But if you are lucky, it will connect with someone. Maybe you’ll make a bad day a little brighter for another human.

But before you join the next self-entitled online film mob, reflect before you tweet. Because if you vocally demand an artist compromise their vision or change their choices, in my opinion you cease to be a fan or critic.

You are simply the crazy motherfucker breaking James Caan’s feet with a sledgehammer.