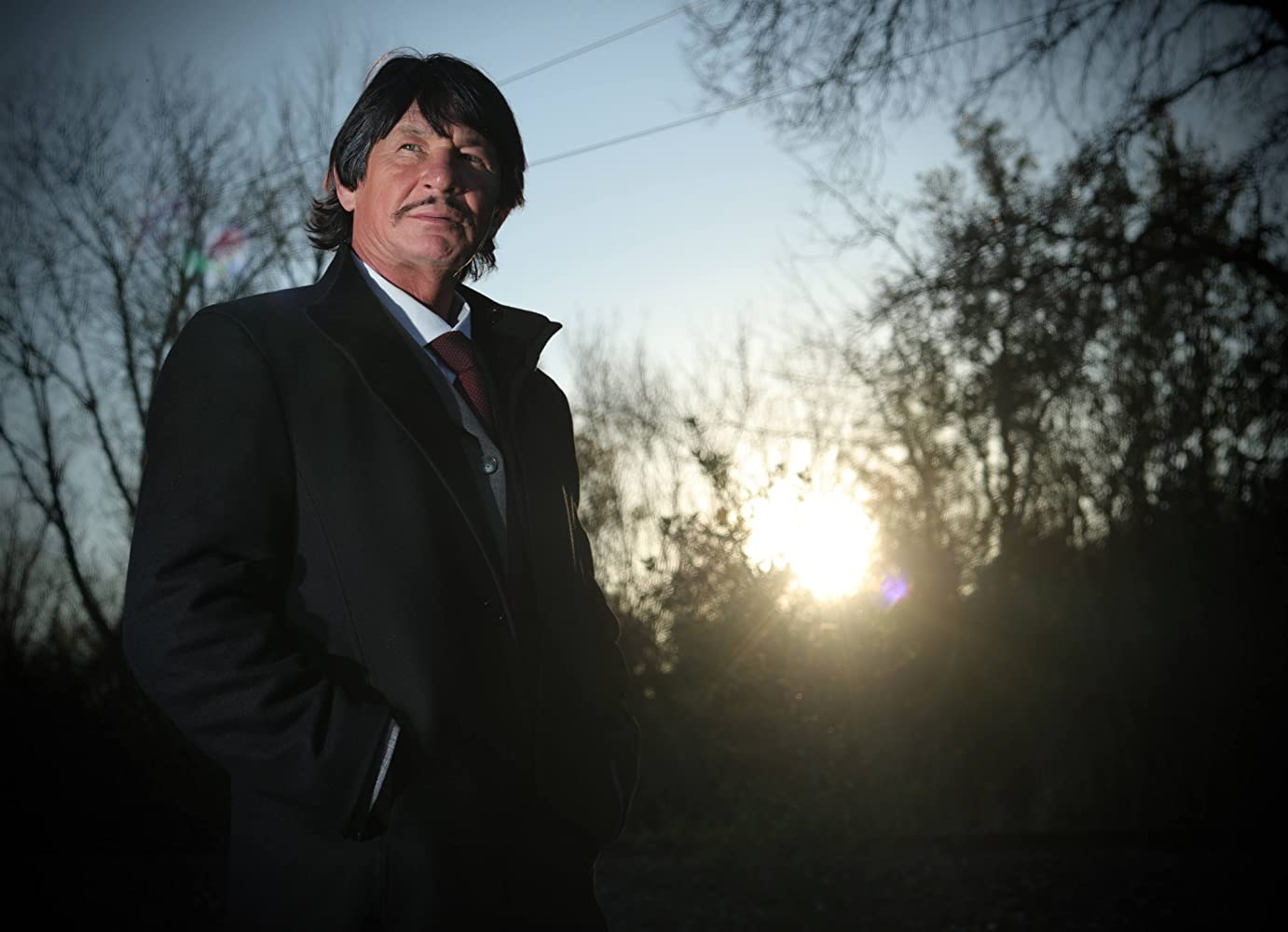 hen Death Kiss was unleashed in the fall of 2018 upon an unsuspecting world, few knew who Robert Bronzi was. The unknown Hungarian entertainer had not built any sort of reputation outside of his smaller stage acts as a musician, an acrobat and a stunt performer. Among his coworkers and friends, however, he had something of a unique reputation: He bore an uncanny resemblance to the late great Charles Bronson.

His friends and coworkers were not the only ones that noticed his appearance. Bronzi was picked up by an agent who set him up as an actor working with various low-budget genre filmmakers like Rene Perez and Gary Jones. Since his first film in 2017, he has starred in four straight-to-VOD films and has an additional three in postproduction, along with numerous commercials and short films.

Bronzi started catching people’s attention in late 2018 when posters for his second film, Death Kiss, started making the rounds on social media. Being released on VOD roughly half a year after Eli Roth’s underrated remake of Death Wish with Bruce Willis, the film had a certain timeliness to it. When Bronson fans finally got their hands on the film, it was clear that Bronzi was something exciting to behold. While the cinematography and audio quality of Death Kissreflected the film’s cheap production values, his performance of “The Stranger” was an amazing callback to Charles Bronson’s turn as Paul Kersey. The film looks and feels like a late-period sequel to the Death Wish franchise: Director Rene Perez uncannily channels the style and feel of Cannon Films action and exploitation of films like Death Wish IIIin the age of digital cinema. While this definitely looks cheaper than those films, it captures the feeling and tone bizarrely well.

Death Kiss is a grindhouse action movie, and it owns that fact. It is not holding back its depiction of violence, nudity or vigilantism. In this world, vigilantism is an unquestioned good, as “The Stranger” enacts his own brutal form of justice against a cruel, violent criminal underworld. It is, occasionally, on the nose: Daniel Baldwin shows up as a right-wing shock-jock who preaches the good word of vigilantism and the horrors of political correctness. But there is something almost admirable in the way Death Kiss is proudly and belligerently obscene by modern action-film standards. While it’s not a technically accomplished film, exactly, Robert Bronzi owns the lead character and injects the film with every ounce of charisma he can provide.

As far as I can tell, Bronzi himself has no political opinions. When I interviewed him last fall, he only said that he plays characters like “The Stranger” out of a fascination for that type of character.

“I like a story of good versus evil. I particularly like a movie where the good guy is flawed. A little rough around the edges. Maybe even a bit of a bad guy himself. A guy who does bad things but for good reasons. I like these characters,” he said.

If Bronzi’s public personality reveals anything, it is that he is a profoundly grateful and down-to-Earth guy who loves the fact that this gift has fallen into his lap. His newfound career path, which has made him a minor celebrity back home, has given him the opportunity to fly around the world shooting films and attending prestigious film festivals like Cannes.

“For this I am glad. This has given me an opportunity to play even more parts and given me much recognition,” he said.

Given the viral success of Death Kiss, his subsequent films have gotten a great deal more attention. His immediate follow-up, Once Upon a Time in Deadwood, was similar to Death Kiss in that it gave Bronzi a chance to parody another one of Charles Bronson’s famous movie archetypes, the gunfighters from Breakheart Pass and Once Upon a Time in the West. Once again, the production design and cinematography reflect the realities of straight-to-VOD filmmaking. Despite apparently being shot on some of the same sets as Once Upon a Time in the West, the film looks like a student film being shot on a DSLR. It also comes with some of the worst sound effects editing I have ever heard in a movie. Every other effect either sounds generic or is mixed too loudly.

The plot is also nothing to write home about, a simple retelling of the noir classic D.O.A. Robert Bronzi, playing the part of “The Colonel,” is poisoned by a woman in need of a gunslinger who can break into Deadwood and save her sister from a group of hoodlums working for a bartender named Swearengen (yes that one…). In order to survive, he must get to Deadwood and save the day before he dies. As simple and occasionally sloppy as the movie is, it’s another fantastic episode in the Robert Bronzi show! The simple pleasure of watching this genuinely charming Charles Bronson lookalike galivant through western sets on horseback and get into gunfights. Upon a Time in Deadwood is not quite as fun as Death Kiss, but it is still pretty solid.

Bronzi’s original starring role, From Hell to the Wild West, was a film I had not watched until I began writing this profile. It was released before Bronzi went semi-viral and had flown below my radar until I realized it was free to stream on VUDU. It had not caught my eye initially since it was not drawing upon any of the archetypes that Charles Bronson had clearly embodied in his career. The movie is not even credited to his stage name, Robert Bronzi, but instead to Robert Kovacz. That said, coming from the director of Bronzi’s two other breakout films, Rene Perez, you see motifs blossom here that would become common in his later films. It’s a lot more fun than I was expecting.

From Hell to the Wild West is essentially a prototype for Bronzi and Perez’s subsequent films. Of the three, it might be the strongest flick if only because it’s the most nakedly honest. It’s an absurd exploitation/horror/western hybrid and it’s fine with that; instead of carrying pretensions of being a semi-serious-minded action film, it’s a horror movie set in a western town where a demonic 1980s slasher villain is running around abducting scantily dressed women and butchering them. The bad sound effects and action in every Perez film work better here than elsewhere because the movie almost comes off as an intentional comedy. Bronzi plays a Marshall falsely accused of committing several murders who has made it his mission to take out the killer and prove his innocence. He essentially plays the same sort of gunfighter from Once Upon a Time in Deadwood, merely facing off against a more over-the-top villain.

The movie has a lot of nonsense baked into it, including a framing device where a college student is studying the events of the film in modern times and figures out the killer’s true (and ridiculous) identity. It doesn’t make sense, and the acting in these scenes is so bad it deserves to be dissected by an episode of Mystery Science Theater 3000. Coming in at just more than an hour, though, the film does not overstay its welcome or get boring. The movie consists of a few quick moments of violence, a bit of nudity and some gunfighting before it ends abruptly. Perfect!

In addition to Cry Havoc, released earlier this month, Bronzi has three more films coming in 2020. His next, Escape from Death Block 13, is one about which I am stupidly excited. It has an insanely silly title, and the premise sees Bronzi fighting his way through a prison after being wrongly jailed. The trailer footage gives the sense that the production values and editing are a bit better here than in his previous efforts. There’s a good chance this will be one of Bronzi’s strongest films! His most recently completed work, The Gardener, is another I am very excited to see. Production wrapped in March, which explains why there is no trailer available. The premise is certainly enticing as the film scales back the action to a home-invasion thriller set in England. His most outlandish role to date might be in the indie-comedy Mat-Rats, where he’s set to play a wrestling instructor in a children’s sports film. Details are somewhat sparse, but it was still in development as of late last year.

Bronzi’s oeuvre definitely isn’t for everyone, but fans of Cannon Films and Charles Bronson owe it to themselves to check out Death Kiss and relive the glory days of hardcore, unironic action films of the 1980s. It’s worth it just to show Mr. Bronzi some support. He has managed to carve out a unique niche as an actor and he does it earnestly and with gratitude for the fans that he has earned along the way. I can’t think of many filmmakers who walk in the footsteps of giants and take pride in it in the way he does.

Tyler Hummel is a freelance film writer whose work has appeared at Geeks Under Grace, The Ed Blog and The Daily Wire.