CULT QUEST: Where Do You Find Your Weird Shit Today? (Part 3) 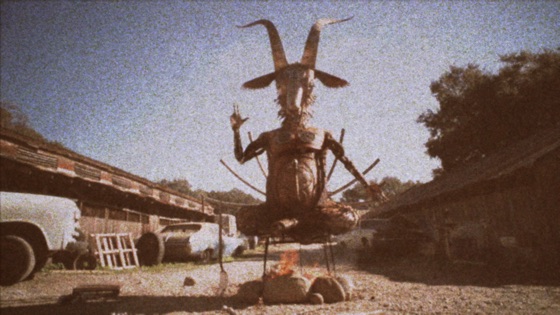 CULT QUEST: Where Do You Find Your Weird Shit Today? (Part 3)

ure, distribution for home viewing is often super-convenient and fans have, for the most part, been granted near-instant gratification for mainstream media. But what if your tastes in film, music, art and literature are far off the beaten path? Some of us remember having to pound the pavement to find hidden treasures of weirdness. When you really have to work to find some underground treasure — when you can display it on your shelf, a trophy tantalizing other big game hunters — it feels so much more important than some instantly disposable digital file residing somewhere in The Cloud.

In this entry of Cult Quest, I expanded my search to include artists from around the world who find inspiration in cult and underground media.

For example, there’s actor, filmmaker, and journalist Saidtha “Chok” Suwanavisootr, whose short comedy-horror film Wiped is racking up awards at festivals. Chok hails from Thailand, and his taste in cinematic oddities extends to pretty much any country with the ability to power a VCR or DVD player. Over the years, he’s pointed me to many bizarre and amazing movies from Asia, which he’s acquired on multiple journeys (my library is all the bigger & better for it). But he’s also an amazing resource of eerie tales and myths from his home country.

“If you live in Thailand, you will definitely discover lots of weird shit,” Chok explained. “People dressing up trees and praying to them; people worshipping disabled animals like they are a gift from God; or people staying away from a banana tree because the ghost chick that possessed that tree wants to seduce them in their sleep! If you really want to find something mysterious and new, learn all about the urban legends and rituals of other countries — and hopefully you can travel to see and experience them for yourself.”

Chok’s thirst for offbeat and shocking cinema rivals my own, so I’m always checking in with him —  especially after his visits home, because he always manages to amaze me with the films he brings back.

“Most horror movies that went straight to DVD in America actually show on the big screen in Thailand,” he revealed. “Even ones that got shelved for years, like Takashi Shimizu's Flight 7500. When I met Ryan Kwanten, who plays the lead, and told him he was great in it, he was surprised that I even saw the movie — because he hadn’t even had a chance to see it himself! They literally put that movie in theaters right after the mysterious disappearance of Malaysia Airlines flight 370 made the news.”

Hollywood makeup FX artist Bianca Appice grew up in the world of horror: Her father, iconic musician Carmine Appice, introduced her to horror flicks at an early age, so she’s extremely well-versed in the genre. Today Bianca focuses primarily on social media when spying for creepy content and offbeat oddities — and she’s always on the lookout for bizarre and macabre events around town.

“Sometimes I’ll see some random ad for an event or sometimes pick up flyers promoting all kinds of cool stuff, which leads me to places like Bearded Lady’s Mystic Museum,” she said, citing one of L.A.’s famed galleries of the strange and unusual. “I also see a lot of fun things to do on Instagram, so I follow a lot of different users, who post cool promos for their events. If I want to go to an art show, or see a band, Instagram seems to be the most interesting and popular spot for posting up flyers.”

Makeup FX Artist Brittany Fontaine, another horror pro, usually gets her weirdness fix at revival screenings. Revival houses frequently host theme nights, festivals, and marathons of cult and midnight-movie titles, and a well-curated revival house can be a rich bounty for devotees of offbeat cinema.

“It’s kind of difficult not to fall into the word of cult entertainment in Los Angeles,” she admitted. “I sign up for emails for theaters and groups that host re-screenings of older cult films. I’ve discovered many of these at Quentin Tarantino’s theater, The New Beverly Cinema — sometimes I just go there without ever even hearing of the film they’re screening, solely based on the plot description. There’s a newer revival company called the Secret Movie Club, and they hold screenings in the old Vista Theater on Sunset Boulevard; they’re constantly coming up with amazing themes for each month. The Laemmle NoHo7 in North Hollywood has been doing the same.”

While Brittany admits she prefers streaming media as a means of finding cult TV shows from past decades, she also can be found perusing the aisles of vintage bookstores in search of the strange and macabre … or just to soak up the atmosphere that only these stores can provide.

“The Last Bookstore in Downtown L.A. has a huge selection of any type of genre,” she noted, “but specifically, they have a true crime and horror vault — inside an actual vault! Sometimes I just go there to hang out for an afternoon, because the ambiance is so pleasant.”

There was one more brick-and-mortar location where I knew I could track down devotees of cult cinema: Blast from the Past, one of Burbank’s beloved gathering places for collectors of movie and TV memorabilia, gamers, tape-traders, and assorted cinemaniacs. At a recent event, I met up with my friend Eric Thirteen. He’s the co-executive producer of multiple cult films, including festival hit Antrum: The Deadliest Movie Ever Made (which had just scored a feature on FANGORIA.com that week). While Eric is one of a new generation of cult and indie producers (he also co-exec-produced Rob Zombie’s 31 and Adam Rifkin’s meta-horror-comedy Director’s Cut), I knew his approach to discovery would be as unique as his resume.

To begin with, Eric co-hosts podcast Double Feature, which is dedicated to seeking out and pairing up films by theme. “Double Feature is constantly looking at discovery,” he explained. “The listeners pick a movie, and then we go out to find something that pairs with it. The puzzle of looking for the right films to complement each other keeps us going down roads we wouldn’t normally travel. I see a lot of movies I never would have watched otherwise.”

A refreshing surprise, though, was Eric’s disdain for many modern hunting methods. “Algorithms have destroyed social media’s true ‘word of mouth’ factor,” he said. “People don’t realize how little of what they see is actually organic and how much is essentially advertisements. We see our friends talking about certain things because a social media giant decided that’s what we should see.”

Like many of the people I interviewed for this piece, Eric enjoys seeking out film festivals in a wide range of cities – particularly when he knows the fest programmers have unique taste and creative curation skills. “If it wasn’t for fests,” he revealed, “I never would have produced Antrum. That’s a movie that’s basically about the discovery of lost and hidden gems.”

In the end, I came away from these conversations with new hope for the future of cult cinema and its devotees, along with the realization that true fans have been the same for generations: If you’re passionate in your fandom, that passion will drive you to become more and more creative in your quest to expand your library of freaky finds.

As any obsessive will tell you, our personal libraries of the bizarre will never truly be complete, as we’re always on the lookout for something new. And it’s this personal mission that makes fandom so rewarding.

Gregory S. Burkart is a writer, filmmaker, musician, reporter and editor for multiple genre publications and sites including FANGORIA, Dread Central, Blumhouse and FEARnet. He and partner Simone C. Williams co-produced the series Tales from the Netherweb for Blumhouse and DREAD: The Unsolved for Dread Central. They are currently developing multiple features and TV series under the Würkart Entertainment banner.