Drawn into Darkness: Some Reading Recommendations for the REBELLER Set 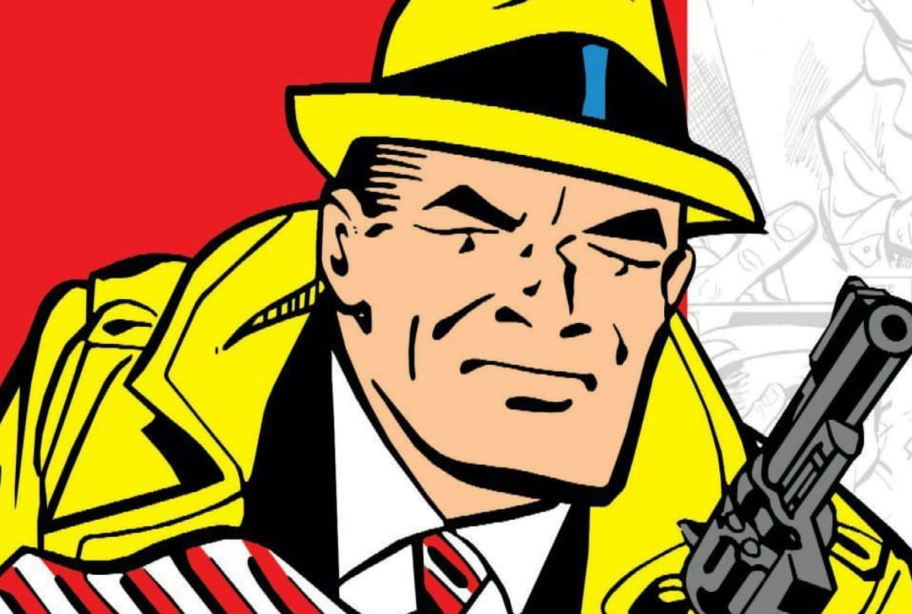 Drawn into Darkness: Some Reading Recommendations for the REBELLER Set

receding my interests in making movies, recording albums, and writing novels was my attraction to hand-drawn artwork, both in animation and comics, and a primary focus of mine when I attended the Tisch Film School at NYU was animation. My shelves are filled with anime DVDs and Blu-rays, and upon my walls are animation cels and original pieces of art by some of my favorite illustrators and cartoonists. When I was finishing the overlong post-production process on Dragged Across Concrete, my interest in comics was rekindled yet again, and I dove headlong into reading all different types.

The scope of what I read was vast: comic strips from the 1920s (Gasoline Alley), 1930s (Prince Valiant and The Phantom), and 1940s (Dick Tracy); novel-length manga; 3,500+ pages by the highly esteemed Duck Men (Al Taliaferro, Carl Barks, and Don Rosa); Floyd Gottfredson’s Mickey Mouse; E.C. science fiction; E.C. and non-E.C. pre-code horror; James Roberts’ intelligent and emotional re-envisioning of The Transformers; Maus; Peanuts; 1980s DC comics; Silver Age Marvel; and the list goes on. At a certain point, I realized I wasn’t just reading these for pleasure, but I was preparing to undertake my creative return to my earliest passion — drawing. From December 2018 to the end of May 2019, I spent about 1,400 hours writing, drawing, inking, and lettering my debut graphic novel, a work of crime and horror. Look for an announcement on this site about that piece in the future …

During the aforementioned explorations, I came across some incredibly good manga, comic books, comic strips, and graphic novels. Of these, I wanted to pick a few that should resonate with the genre aficionados at REBELLER.

Many people of my generation hold Watchmen, The Dark Knight Returns, Alan Moore’s run on Swamp Thing, and Bill Watterson’s Calvin and Hobbes in particularly high regard, and I’m no exception. Those works are superb and changed how I saw comics. And while I cannot point to works that necessarily exceed these landmark game changers, I can point out some pieces that deserve to be in the same conversation in terms of both quality and innovation.

There is no bigger name in manga (Japanese comics) than Osamu Tezuka, who is best known worldwide as the writer, illustrator, and creator of Astro Boy (Tetsuwan Atomu), but is far, far, far more than that. A prolific artist and writer who had a medical degree, this hardworking and talented fellow who helped shape the Japanese animation industry also wrote and drew the far superior (and more adult) Black Jack manga series and a vast array of other significantly more challenging works. The one I wish to recommend in the context of this article is Ode to Kirihito. This is a very ambitious and somber work from the Tetsuwan Atomu creator, the contents of which would have to be toned down in some areas to even land in an R-rated film. Yet I’d never describe his bold approach as gratuitous — it is simply unfettered.

The concept of Ode to Kirihito is quite bizarre: A patient in a hospital is slowly turning into a dog. The doctors — including the titular medico Kirihito — refer to this canine degeneration as Monmow disease, and the sprawling quest that ensues is one in which the disease, the failings of individuals, trust, the politicization of the medical industry, religion, familial obligations, and many other issues are explored. The journey is massive, surprising, emotional, ambitious, morally complex, and even harrowing at times.

And like almost all of the great works by master cartoonists — Hal Foster, Frank King, Carl Barks, Roy Crane, Chris Ware, Seth, Al Feldstein, Chester Gould, Bill Watterson, Frank Miller — the art and the story in Ode to Kirihito are indivisible. The design of the characters and their expressiveness yield as much characterization as the story and the characters’ actions. Tezuka’s style is certainly cartoonish when compared to many illustrators of serious stories, and while this shows his fondness for Disney’s incredible craft tint stylist, Floyd Gottfredson, and also facilitated his creation of so much work, Tezuka’s style yields a very immediate type of reading experience. The simply drawn characters and their actions and their emotions are almost instantly impressed upon the reader because of their iconic nature, and various characters are also quickly identifiable without confusion. The panel layouts change throughout to fit the story, as evidenced when Tezuka deploys his skills in animation — see the stunning and emotive sequence on page 115, pictured here — but always the style choices support the emotional content of the story. The afflictions of the main characters and the tension of final sequences are the end result of this clean, clear, and expressive style as well as the extremely good writing.

The premise of people turning into dogs could easily have been silly, but Tezuka’s passion and artistry and scientific mind make this allegory uncommonly powerful. It ranks amongst my favorite works of fiction, drawn or otherwise.

Few horror cartoonists — if any — elicit the shudders that I feel when I read a tale by 56-year-old Junji Ito of Japan. The current widespread availability of his work in the United States shows an increasing interest here, and it’s not hard to fathom why this is so. My favorite stories by this mangaka are his short, stand-alone tales. His drawings are fairly realistic with simple clean character designs, but when he adds texture or renders a “shock panel,” his art gets significantly darker, more detailed, and quite vivid.

The Ito collection entitled Shiver is my favorite of what I’ve read so far, though Fragments of Horror has some gems in it as well. In the former, Ito contrives a series of interesting weird fiction scenarios that grow more unsettling as the stories progress, and his shock panels leap off of the page and are truly unsettling. These are not “fun” images of zombies munching on a victim or some vampire’s sanguinary sucking but genuinely disturbing nightmares that put a bad smell in the air that hangs between the tip of your nose and the open book.

I have read (and watched and written) a lot of repellent stuff, but the acne-centric story “Greased” is a truly repulsive wonder, as are the revelations in the story “Shiver.” In addition to these and other repugnant morsels, nonsensical but engrossing nightmares that seem stolen straight from Ito’s id are explored in “Hanging Blimps,” and the premise of “Marionette Mansion” is a very bizarre original about a family that chooses to give control of their limbs over to unseen controllers in the crawlspace above. Clever premises, engaging mysteries, malodorous shock panels, and nightmare wanderings combine in the uniquely unsettling and uncommonly vivid work of Junji Ito.

Chester Gould’s Dick Tracy is a well-known comic strip character who dates back to the 1930s, and even though I glanced at some strips in the paper when I was a kid (and saw the really shitty movie), it wasn’t until recently that I took the time to read some of these massive 500+ strip collections that are being published by IDW/The Library of American Comics. For my first survey, I chose a collection from the 1930s, one from the 1940s, and a third from the 1950s, which was my easy favorite.

Skipping across the decades, it is easy to see the development of Chester Gould as both an illustrator and a writer. Initially, the sleuth’s distinct profile and bizarre villains were absent … and the stories were OK, mainly detailing Dick Tracy foiling racketeers and his romantic troubles with Tess Trueheart. This was done with a LOT of text, a stultifying and often eye-watering amount of words in each panel that crushed the hapless characters who stood below.

While this strip remained exposition heavy, a better balance was struck by 1941. Additionally, the characters were more distinctly rendered and the violence was more creative. One of the earliest of Gould’s “grotesques” was a charmingly designed villain named Littleface, whose name served as a physical description as well. After wrapping himself in cow hides to keep from freezing to death, the villain’s ears become so frostbitten that they had to be amputated… Prior to reading the strip, I would have assumed that stuff like “ear removal” was not permissible in a nationally syndicated comic strip in 1941, but Gould’s material often gets quite dark. Littleface and the Mole were instantly recognizable characters from this era, and the mood of the strip became more uniquely noir … and increasingly outré.

The volume from 1956-1957 that features Flattop Jr. and the Kitten Sisters fully delivered what I was hoping for from this long running strip: exciting chases, tough talk, bizarre villains, and a heavy noir atmosphere. It also answered the question, “What do you do if the game warden tries to stop you from hunting?” (Answer: Kick him in the face and shove him into a deer carcass.) Ballistics and ratiocination figured into Dick Tracy’s logical sleuthing while chases and morbid irony crept into the plotting, most notably a story arc in which a dead man is kept in a freezer for a very long time. The famous Flattop Jr. story is far-ranging and touches on themes of juvenile delinquency, artistic dissatisfaction, young love, and insanity; it’s really quite good. I have many more volumes to explore, but the value of the long-running strip is fully evident to me with this 1956-57 volume.

The last comic that I recommend is a science-fiction gem from Argentina entitled The Eternaut. I was wholly unfamiliar with this work, and purchased it largely based on the fact that it was published by the tastemakers at Fantagraphics and that the reviews were so positive. This excellent work of science fiction from Argentina was written by Héctor Germán Oesterheld and illustrated by Francisco Solano Lopez in the late 1950s. In the beginning of the story, weird snow falls as a group of scientifically-minded men in Argentina play Truco (a card game) in an attic. The group soon discovers that something bizarre and disastrous has happened to the town outside during the storm … I cannot discuss much more without spoiling the many compelling revelations, but the determined group decides to unravel the mystery of what has befallen their city.

The setup seemed like an episode of The Outer Limits, but soon I noticed how very, very, very smart the characters were and the uncommonly thoughtful ways in which they interacted with each other while attempting to solve the harrowing mysteries. Writer Oesterheld put a LOT of brains and heart into these people. I compared the piece to The Outer Limits, but the scope is far bigger than a movie — it’s novel-sized — and the plotting and characterization are far more sophisticated. Readers of science-fiction authors such as Greg Bear, Arthur C. Clarke, and Ted Chiang will enjoy this superbly written work, and the rich, realistic and deftly executed chiaroscuro art by Lopez gives gravity and definition to every character. Few works of science fiction in any medium can stand alongside The Eternaut, and I look forward to reading more works by these two talented creators.

The four focal works of this article and the others mentioned are recommended to curious readers of comics, and served as both entertainment and inspiration in my own creative undertakings. Please explore whichever of these works sounds appealing to you …