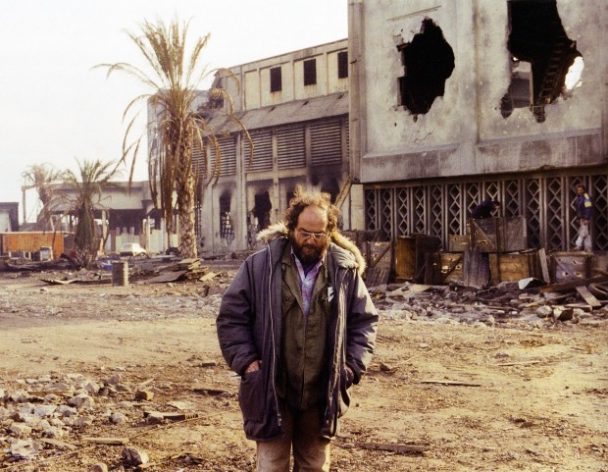 We are very grateful to Aaron Couch and The Hollywood Reporter for the fine article (Sept. 20, 2019) detailing Tim Colceri’s experience acting in Stanley Kubrick’s Full Metal Jacket. As recounted in that piece, Colceri lived in a basement apartment of a house in upscale Chelsea that Fox had rented for Michael Biehn, then working on Aliens. They swiftly became friends and Michael grew alarmed as Aliens neared wrap while Colceri hadn’t even begun yet — he had the pivotal role of the drill instructor — and his movie had started shooting before Michael’s. Michael was appalled by what he witnessed of Kubrick’s treatment of Colceri throughout that experience; as Michael has worked with a cadre of talented directors over the years, that feeling has only intensified.

Seeing Colceri recently in Las Vegas stirred again that long-simmering animosity Michael has harbored for Kubrick ever since Full Metal Jacket. In his four-decade career, he has never witnessed such abuse by a director toward actors — toward everybody in his orbit, really — as what Kubrick practiced on the people who sought to work with him. Michael wanted to see this documented in print, so we worked together to gather memories and thoughts that provided the rudiments of the story Aaron produced.

In the course of our discussions, we looked at many of the reminisces of working with Kubrick available online and we were struck by the consistent accounts of abusive behavior, running the gamut from callous disregard to deliberate, vindictive, spiteful mistreatment that may have been detrimental to his movies. For us, the experience led to a fuller, more unblinking appraisal of the price paid by those who worked for a man who appears, in turns, insidious and oblivious.

The documentary Filmworker helps explain Leon Vitali’s “vacant stare” — the look on his face when he had to tell our friend Tim that Kubrick was dumping him in favor of R. Lee Ermey for the role of Gunnery Sgt. Hartman — by demonstrating the toll of 20 all-consuming years he devoted to Kubrick.

“He sucked the life out of you,” Vitali assesses of the man. “If you told Stanley you’d give your right arm to work for him, he’d think you were low-balling him. He’d want your left and everything else.”

Others interviewed in the documentary offer the same assessment. And voluminous accounts of Kubrick at work are available on YouTube; we found two to be particularly enlightening and disturbing. “Staircases to Nowhere” is a making-of look at The Shining. Eighteen minutes into the film, Assistant Director Brian Cook chuckles as he talks about how he and Stanley “harassed” Shelley Duvall throughout the laborious shoot and alienated her from the rest of the cast and crew, something we’d see echoed when Colceri showed up in London. When Duvall would plead with Stanley to tell her what he wanted from her, he’d reply, “You’re the actress, do something brilliant.”

It’s impossible in the online Kubrick material, at least in what we’ve seen, to find actors who speak glowingly of their time working with him. All are clearly exasperated by the endless number of takes Kubrick would require, and none speak of him giving them any real insights into conceiving and shaping their performances. “You’re not going to do it that way, are you?” represents the substance of what a number of actors recall hearing from him.

In a 20-minute introduction to a screening of Filmworker, Matthew Modine poses questions to Vitali and director Tony Zierra. Ten minutes in, Modine recounts the torment Kubrick put Dorian Harewood through during his final days on the film. When Harewood’s six-month contract expired, he asked to negotiate for increased money as he was losing out on lucrative career opportunities. Furious at this impertinence, Kubrick fulminated until he declared he was going to kill Harewood’s character in the film. For Harewood’s remaining six days, Kubrick shot endless takes of him in the freezing mud, riddled with painful and bruising full-load squibs.

Kubrick visited his vindictiveness on Modine when the actor opined that one idea was “dumb,” and they’d just wind up reshooting it like “we have everything else in this whole fucking movie.” That earned Modine a month of being scorned as “the cunt” by Kubrick. Kubrick’s mistreatment of Scatman Crothers is discussed numerous times; Vitali told Colceri that he had to break into Crothers’ hotel room, pull the actor out from behind the curtains, and drag him back to the set after Stanley had run him through more than a hundred takes of one lengthy shot.

With his later films, Kubrick operated with a degree of independence and autonomy few directors attain. Did the latitude and autonomy Kubrick enjoyed as he made these films result in better movies? As he acquired more authority, as people extended themselves for him, he was able to cocoon himself into his domain, freed from the chore of actually having to deal with people on a daily basis, and his movies became as alienating and aimless as their maker. But at what cost?

The gulf between Dr. Strangelove, his tight, purposeful masterpiece, and Eyes Wide Shut, which can only be endured that way, suggests that free rein for Kubrick didn’t produce better movies. And the ever-increasing gap between releases over the last 20 years of his life suggests Kubrick was adrift, in need of constraints. But these judgments, of course, are a matter of taste. What is beyond dispute is that working for Kubrick took a real toll on the lives of real people, people who craved to be a part of the life of a filmmaking legend, a legend who often treated them callously and found them utterly dispensable once they’d served his purpose.

When we looked at a draft of the Hollywood Reporter story on Colceri, Michael was again driven to anger by Kubrick’s treatment of his friend.

“The details are all there, but they don’t convey the true dimension of that nightmare,” he said. “I know great filmmakers revere him; Cameron, Spielberg, Scorsese all said he inspired them, but they didn’t have to work for him. I don’t see it. His movies just got more awful after Strangelove until he wound up with that final abomination. And as a man, he was a soulless monster. It’s not that he didn’t care what he did to you, he wasn’t even aware of you. A bully, a liar, a tyrant. If you look up the word sociopath in the dictionary, I think it fits him perfectly.”

Looking back on even secondhand experiences, Michael sees a marked contrast between Kubrick and the directors of note with whom he’s worked. Kubrick kept Colceri in isolation and kept the rest of his cast very much in the dark about what they were doing and what he wanted of them. Michael saw a dispirited company in Full Metal Jacket, aimless and frustrated: an army in search of an inspirational general. On the Aliens set, Jim Cameron sought to fully engage his cast. He had the actors playing Marines design the insignia for the breastplates of their uniforms and invited cast members to dailies, something rarely done by directors at that time but something Cameron had done with Michael on Terminator.

Michael grew to appreciate the way directors like Cameron — including William Friedkin, with whom he made two films, and Michael Bay, his director on The Rock — actively engaged with their actors in shaping their roles and were most receptive to their input.

“Mostly, Jim will let you know your idea doesn’t work for him, but if it does, he’ll use it,” Michael said. Michael points to the interrogation scene in Terminator, when Reese realizes the futility of explaining to the policeman and addresses his pleas directly to the surveillance camera. Cameron embraced the idea, and that’s how the scene plays out.

Michael portrayed a prosecutor in the first film he did with Friedkin, Rampage, and recalls working on the screenplay with Friedkin for days. When he observed that his attorney father carried a microcassette recorder for note-taking, Friedkin saw it as a good method of conveying exposition and has the character do the same throughout the film. And on The Rock, Bay invited principal cast members (including those portraying the SEAL team) to tour Alcatraz, even though some of them wouldn’t be filming there. He had cast members shape their roles by working with screenwriters assigned to them. These measures inspired camaraderie among the cast and confidence in their directors, and a willingness to go the extra measure for the good of the film.

Among the premier directors Michael has observed, none welcomed input as openly as Robert Rodriguez on the set of Planet Terror. He took them out to dinner often and encouraged them to offer their ideas. He told them they could draw paintings to hang on the wall for their scenes; some made it into the movie. He told them that if they had wanted additional material for their characters, they could write it. Michael had never had such an invitation and responded with a three-page scene Rodriquez spent close to four hours shooting. When the Coen brothers approached Josh Brolin about shooting an audition scene for No Country for Old Men, Rodriguez offered to shoot it so Brolin wouldn’t have to leave town. One of the actresses volunteered to perform the scene with him; they shot it during lunch and sent it off to the Coens — who, of course, cast Brolin for their Oscar-winning film.

For Michael, these actions by Rodriguez inspired the actors, made them feel truly invested in the film, and built up confidence that their director knew what he was doing and valued them. And his efforts just drove home the fact that being a great director and a great person are not necessarily mutually exclusive.

Portions of this piece previously appeared online, including at moviechat.org

Michael Biehn is an actor, director, and producer whose credits include The Terminator, Aliens, and Tombstone. Jim Anderson has worked as an agent, executive, and producer who has worked on numerous films, including Tin Cup, An Officer and a Gentleman, and 48 Hours. Jim and Michael have been friends for nearly four decades.