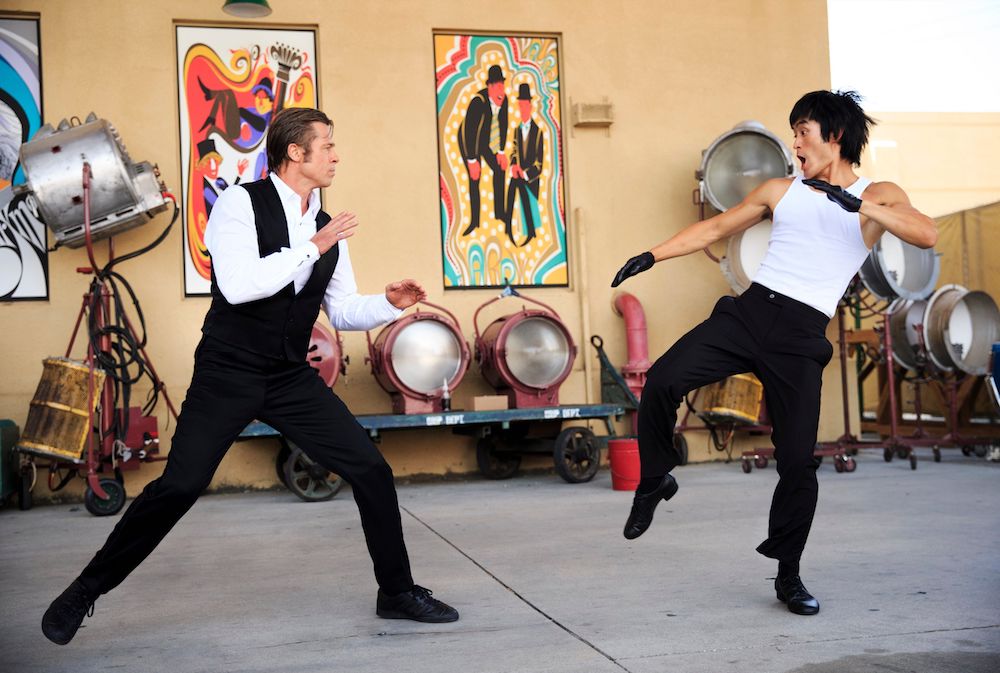 Brad Pitt (from left to right) and Mike Moh as Bruce Lee spar in "Once Upon a Time in Hollywood." (Photo: Columbia Pictures/MovieStillsDB.com)

‍“Throw him off a building, light him on fire, hit him with a Lincoln! He’s just happy for the opportunity.” - Rick Dalton, Once Upon A Time … In Hollywood.

Amongst all of the usual politicking and platforming at this year’s Oscars (“won’t someone think of the cows?!”), one man said something REBELLER can actually get on board with. That man was Rick Dalton’s buddy, Brad Pitt. No, no, not the lame suggestion for QT’s tenth and final movie. Rather, his hope that the Academy will one day acknowledge a bunch of hard-working folks who have been risking their lives for our entertainment since the actual dawn of cinema.

“You know, I also want to say, while we’re doing all this, I think it’s time we give a little love to our stunt coordinators and our stunt crews,” Pitt said.

To those in the industry, that simple sentence spoke volumes. For British stunt legend Peter Pedrero (Harry Brown, Peaky Blinders, Final Score, The Courier, Venom 2), it was a highlight of the ceremony.

“It was a great feeling,” Pedrero said. “With all that must have been going through his head up on that stage, and all the other people he could have thanked or mentioned in those 45 seconds, he didn’t forget to mention the stunt coordinators and performers. That speaks volumes to me about Brad Pitt as a person. Top bloke.”

Of course, Pitt isn’t the first person to speak up on behalf of the army of stunt people of which Cliff Booth is a member. Sidney Lumet got there first, and went further, back in 1991. The 12 Angry Men director saw the injustice and sponsored his A Stranger Among Us stuntman Jack Gill for membership of the Academy so he could fight his own case. Decades later, the mission still hasn’t been completed.

Gill was told he would have to establish a stunts branch of the Academy and rally enough members to vote for the category. So, as with so much else in the industry, it’s all politics.

“The thing is, I don’t imagine many of my colleagues became stuntmen to win awards,” Pedrero says. “That’s not what we are about as worldwide professionals. But, considering the contribution we bring to filmmaking … you have an Academy Award for SFX, visual effects; they work closely with us, but we are not part of that ensemble.

“Other institutions have acknowledged us, like the Emmys and the Prestigious SAG awards, so to be recognized and have our own category from BAFTA and the Academy of Motion Pictures would be brilliant, [it feels like] we’re the only department in the film industry that doesn’t have a category!”

And there’s more to the issue than simple credit being given where it’s due. In a world where CGI effects are almost indistinguishable from actual human endeavor, an Oscar would put stunt teams’ achievements on the world stage, shining a spotlight on the stuff that’s still done for real.

One of Pete’s most iconic stunts faced this challenge. Remember that advert where Jean-Claude Van Damme did the splits on a couple of trucks? Pete coordinated that.

“We did it for real, there was no studio shoot or shooting it forwards then making it look like it was going backwards, the speed we did is the speed you see,” Pedrero said.

“There were certain safety measures that had to be taken but the danger was still there. You had an artist standing abreast two trucks, with them reversing at speed, and doing the splits. We shot it in one take at sunrise at 6:30 a.m. in Spain on a disused runway.

“I remember reading various comments on social media where people said that it was CGI. It made me laugh. It was achieved by the producers and actor trusting and allowing the stunt coordinator to work it all out with his team, rehearse it until it was achievable - and safe - and then shoot it.”

Still, the Academy don’t have their heads stuck all the way into the sand. They are, at least, aware that stunt people actually exist. Several have even won Oscars, albeit in exceptional circumstances.

Pitt was likely aware that Cliff Booth’s inspiration, Hal Needham (Burt Reynolds’ stunt double/ pal) won a technical award in 1987 and an honorary award in 2013. Yakima Canutt, who doubled for John Wayne and staged the chariot race in Ben-Hur, won his honorary Oscar in 1967 for contributions to the craft. Harrison Ford’s Raiders double, Vic Armstrong, won a technical-achievement award in 2001. And that’s all she wrote. Not much to show for one of the most important departments in modern (and classic, for that matter) cinema.

The situation isn’t just elitist, it’s dumb. Remember when the Academy was thinking of adding a patronizing “Best Popular Film” category, so they could convince young people to watch their boring ceremony again? Yeah, if you want to give trophies to movies like John Wick or Fury Road or Mission: Impossible or whatever, then MAYBE a better way to do it would be to create an award that celebrates the essential teams at the heart of all of those movies, the bad-ass crews who create the sequences that awe audiences in those “popular” films.

Who knows why they haven’t? There’s an apocryphal tale of a high-ranking Academy member coming home to find his wife in bed with a stunt performer, swearing blind that there would never be a stunt category from that moment on ... but it’s almost certainly bullshit.

Far more likely are the class issues at the heart of Hollywood. Performing with your body and dynamite or whatever is probably a little too close to physical labor for the elite’s tastes: too working class. For all the boo-hooing about Greta Gerwig not getting a Best Director nod for her average film, we’re sure she’ll be okay. Who knows? She might even get one for her next project, the Barbie movie she’s developing at Warner Brothers.

Meanwhile, there are generations of artists who don’t even get the opportunity to be snubbed. And that needs to change. Until then, stunt performers will have to settle for the infinite respect of their colleagues while they wait for their fairytale ending.

“On a movie I finished recently, we spent the better part of the day doing a big fight scene on a set which was very gladiatorial looking, a massive circular arena with about 200 extras and about 60 crew,” Pedrero said. “The scene involved various stunt performers getting killed in a fight to the death, and the scene ended with a stunt performer catapulted about 20 feet backwards through the air and crashing onto the ground.

“On ‘CUT,’ the entire set started clapping and cheering with no prompt from anybody. Standing on that set and seeing hundreds of people clap and cheer showed the appreciation of what we had just performed and made all our efforts and hard work even more fulfilling.”