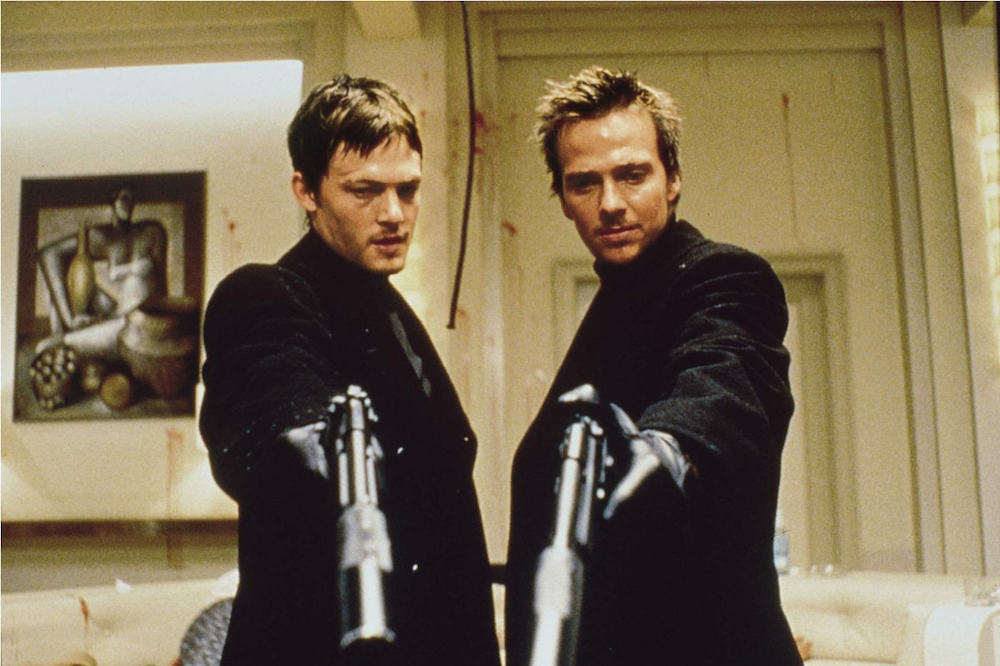 couple of weeks ago — you know, pre-lockdown, the before time, the long-long-ago — another St. Patrick’s Day came and went, and while most of my friends, colleagues and peers spent it revisiting one of the many entries in the Leprechaun series, I spent it the way I always do annually: with a double feature of The Boondock Saints movies.

After all, as Norman Reedus’ Murphy MacManus says during the first scene of the first movie, “Come on, it’s St. Paddy’s Day. It’s all in good fun.”

Here’s a funny thing I’ve noticed. I spent the majority of my life living in New York and then the last decade on the other side of the country in Los Angeles. When I was back in NY, I tended to be the cinephile of the group that would introduce a “cult” film to the rest of my friends. Not to say I didn’t have movie-loving friends back East, but they didn’t seek out this stuff the way I did. And so, I was the one that sat my high-school buddies down for their first viewings of things like Peter Jackson’s Bad Taste and Dead Alive, or the Evil Dead trilogy or Donnie Darko or Chopper, or Dario Argento’s movies. When I finally landed on The Boondock Saints, I knew nothing about the filmmaker involved, just that it was a kick-ass, highly entertaining and hilarious vigilante flick in the post-Tarantino world. There was something about these two brothers that resonated with my friends and me. In fact, the core members of our group that would often host these screenings at their house were the Catropa brothers, and I couldn’t help but be reminded of my life-long childhood friends mirroring the relationship between the MacManus brothers when I saw this movie.

And what’s not to love? At that point, I had already known who Sean Patrick Flanery was from things like Suicide Kings and Young Indiana Jones. Long before The Walking Dead, Norman Reedus was that dude from Guillermo del Toro’s Mimic and Blade 2, as well as that Gossip movie. The movie opens with a priest’s sermon recounting the infamous (and somewhat apocryphal) story of Kitty Genovese, a woman who was murdered while screaming for help as approximately 38 witnesses did nothing to stop the attack. Later that night, the brothers get into a bar fight with members of the Russian mob who come back seeking retribution. They end up killing the trio in self-defense and are nicknamed “The Saints” by the press for standing up to the thugs. Taking it as a sign from God and inspired by that Genovese story, they decide that this is their purpose, hunting down and taking out bad guys.

It’s a bit like The Punisher or Death Wish but without the tragic origin story: Rather, we have two extremely well-versed, charming and incredibly lucky Irish brothers who seem to be really, really good at taking out mobsters, especially considering that most of their plans come from movies and TV shows they watched growing up. It’s darkly comic and it relies on the fundamental truth of most vigilante pictures: We just want to vicariously see someone take out the bad guys. Hot on their trail is Detective Paul Smecker, an openly gay agent played to perfection by Willem Defoe in arguably one of his boldest, and a personal favorite, of all his performances. Hell, how many movies can make comedian Billy Connolly into a total bad-ass hitman? He turns out to be the Saints’ long-lost father, who also was an enforcer for the mob.

This became a regular staple of weekend viewings with my New York friends; something we would quote repeatedly, drink to and discuss at length, hoping that one fine day, we’d get that sequel. When I moved to Los Angeles and mentioned this movie, I noticed there was no love for it whatsoever on the West Coast. I’d often hear, “Did you see Overnight?”

So in 2003, a few years after The Boondock Saints had already become a cult phenomenon, this documentary called Overnight came out that showcased the rise and fall of writer/director Troy Duffy. It seemed that the rags-to-riches-to-rags story from the documentary had completely clouded everyone’s perception of the actual movie this guy made, at least here in Hollywood. (Or, who knows? Maybe people just really don’t like that first movie? But I’ve always been a sucker for the Pulp Fiction boomlet, loving Things to Do in Denver When You’re Dead, Killing Zoe, Lock Stock and the previously mentioned Suicide Kings. So, I didn’t care about Overnight.

When I did finally see the doc, it was disappointing. Not just because of the behavior depicted by Duffy, but because the making of The Boondock Saints, a legitimate cult phenomenon, was relegated to a few short minutes of screen time. Instead, it focused heavily on a 25-year-old bartender who happened to get a million-dollar contract for his script, literally overnight. Now, not that there’s ever defending any egotistical or harsh behavior like this, but do you remember when you were 25? I do. (I was in a band.) If someone came to you, offered you millions of dollars and basically told you you were a genius, how would you react to that? I know for me, personally, I wasn’t ready to be a rock star at 25. (Which, thankfully, I never had to worry about.)

Was Duffy brash? Sure. Who cares? All that matters to me is the movies.

And so in 2009 as a newly christened Angeleno, I was so excited that the sequel finally came out in theaters. What was the verdict? It’s impossible to live up to the expectations of a follow-up to a cult film, especially on first viewing. It was a bit jarring to cut from that ending of the last one to this eight-years-later time jump. It’s kind of how I felt about The Dark Knight versus The Dark Knight Rises. By the end of The Dark Knight, this is it. Batman has defeated his first major villain, The Joker, and is officially the Batman we know and love from the comics, ready to face other similar villains and go on many more adventures. Then, eight years later, we find out he gave up being the Batman? And did nothing in that time period?

At the end of the last movie, the Saints revealed themselves to the world in a stunning display of public vigilantism. The origin story is complete! Now they’re going to go and continue chasing bad guys, right? From city to city? Well, no.

At the opening of The Boondock Saints 2: All Saints Day, we learn the boys and their father disappeared to Ireland and have been in hiding since the closing events of the last flick. However, back in Boston, someone has murdered a priest in church and made it look like it was the Saints, which calls them back into action. What’s funny is, nothing has really changed, except that on the boat ride back, they pick up a third member of their clan, Romeo (played by Clifton Collins Jr.). They literally have to start over again, and none of their plans seem to go, well, according to plan. They’ve always been kind of bad at being bad-asses. But you know what? That was the charm of the first movie. Despite how badly they messed up in any situation, these guys always pulled through it in some unbelievable, kind of hilarious ways. And this time, instead of Defoe, Julie Benz is their guardian angel within the FBI.

The highlight of the sequel is they give a lot more to Billy Connolly to do. How did he become the mob enforcer and feared hitman in the underworld? Through a series of Godfather Part 2-esque flashbacks, we get to fill in his backstory and learn how his best friend betrayed him. That best friend, Louie, is played by Peter Fonda. I mean, come on!

The beauty of this double feature is that on repeat viewings, it’s just a lot of pure escapist fun. There are laughs, there’s gore and gratuitous violence, there’s some great traditional crime storytelling and just an overall over-the-top comic-book feel in the vein of Garth Ennis. You can just tell how much fun Sean Patrick Flanery and Norman Reedus are having on this second one. And it’s infectious.

So, I don’t know why these movies get the bad rap they get. A lot of it could be the man behind the films, who to this day hasn’t really made anything else. There were talks of a third film that never materialized. And even a crowd-funded TV show, rumored to feature a re-cast MacManus brothers, which, thankfully, never happened. But these two movies, on their own, are here for us to celebrate every St. Paddy’s Day.

“Thanks for coming out!”