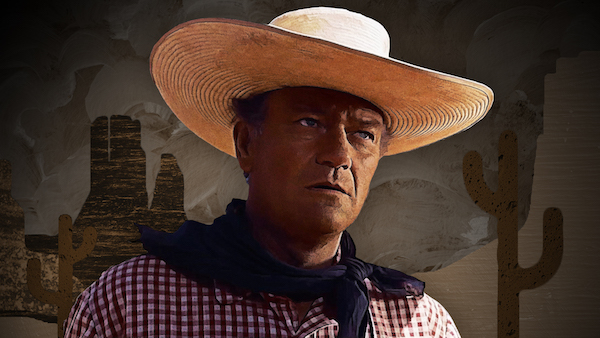 head of the 2019 Oscars, airing this Sunday, let us take a moment to remember that this is the 50th anniversary of John Wayne’s winning — and consider, for a moment, that Duke may just be the greatest practitioner of movie acting in the sound era.

Wayne came to us from a different time — and a different technological era. In 1927, Warner Brothers released The Jazz Singer, a movie so feverishly mediocre in every possible way that, had it not been for one conspicuous technological feat, it would have forever disappeared from the cinematic landscape the moment its first run ended. That technological feat, of course, was sound. Not the whole movie, but a few select scenes where star Al Jolson sang some songs and, by God, you could hear him. As the sound era rushed in while the silents were jettisoned out the back door, studios began looking for stage-trained actors who could recite great dialogue before the camera. And it got them. Helen Hayes, John Barrymore, George Arliss, and Katharine Hepburn were all called up for active service and all came, gung ho and battle ready, except for one thing: None of them knew how to act in movies.

Oh, sure, you’d be excused for believing they did, especially Hayes and Hepburn, who both had careers so long and fruitful that most of us are thinking of them late in the game, when they had fully earned their chops and knew the tricks of the trade. Certainly, they all became great film actors. But early on, they were great stage actors who gave good to great stage performances that happened to be filmed. Many new actors to sound, Arliss and Barrymore especially, chose stage-to-screen roles over written-for-the-screen roles, as plays were seen as more prestigious. This significantly hampered their long-range accessibility as many of those early stage-to-screen movies in the sound era’s infancy were dour proceedings indeed. A few rose above it — Dinner at Eight comes to mind — but most were statically filmed records of, essentially, stage performances. The movies required something else entirely.

And that something was John Wayne.

Okay, history lesson’s over. If you want to know about John Wayne’s career, life, views, or what his favorite meal was, the internet’s right there — you can use it to order Scott Eyman’s great and exhaustive biography if you want a deep dive of that sort — and I’m not going to stop you. One, I don’t care, and two, I don’t have the time because now we’re finally [ed. note: finally!] digging up that long buried lede and the lede is this: John Wayne was the best goddamn actor the movies ever saw. Period.

John Wayne suffered then and now from that single most misunderstood aspect of acting, that all actors play themselves. All actors are inhabiting a part, taking what’s written and making it into something that sounds natural coming out of their mouths. That Wayne did this so astonishingly well has led to generations of know-nothings dismissively expressing with the wave of their handkerchief, “He was just playing himself.” As if any of us, playing ourselves, could ever be half as captivating with 100 years to prepare. Yes, he was playing himself, and doing it so well you didn’t think for a second he was acting. Now, kindly, fuck off.

Rather than sit back and slowly wind through Wayne’s filmography, musing over each role, or perhaps sets of roles (cowboys, soldiers, fighters), let’s instead, take them all at once, because there’s not a single performance of the Duke’s that lacked in confidence. I don’t mean the characters: He’d sometimes play a character like Tom Doniphon in John Ford’s Man Who Shot Liberty Valance, who suffered from a lack of confidence when it came to expressing his true feelings for the woman he knew he was losing to Ranse Stoddard (James Stewart). No, no, the actor himself. Wayne never stumbled through a line delivery because he never lacked the confidence that comes from someone who’s an expert at his craft. And his craft was movie acting.

Movie acting absolutely depends on the confidence of the actor. The perfect movie actor understands there’s no need to soliloquize for five minutes when scowling for five seconds will do. It was this remarkable capacity for subtlety on the set that played so well, and so big, on the screen. There are plenty of old Hollywood stories of actors like Laurence Olivier having to learn to tone it down for the screen, needing constant reminders that there wasn’t a back row to play to, there was a camera, and it was right in front of them. Wayne never needed any such reminders, and not because he was an emotionless block of wood, but because he played those emotions so damn well.

Look at the glare of hatred in the famous shot from The Searchers, where he turns to face a white woman speaking like one of her Comanche abductors. His character, Ethan Edwards, doesn’t hide his hatred and distrust of Indians and this moment, this look, needs to relate to the audience everything that Edwards is feeling in that moment. It’s a recipe for an over-the-top acting disaster. But that’s not where Wayne takes us. Wayne’s look isn’t crazed. There’s no manic shaking of his head or bulging of his eyes. He is surrounded by shadow; the brim of his hat cuts an extra line of shadow across his face. His eyes are set to a squint, his mouth shut to a clench, slightly wavering on the right. On the set, it must have looked like Wayne wasn’t doing anything at all. On the screen, it’s shattering.

In that same movie, Wayne conveys grief, joy, remorse, weariness, and anger, and does it all through a simple expression, a laugh, or a gesture.

John Wayne was nominated for a couple of acting Oscars and won one of them (Best Actor for True Grit, 50 years ago in April), but giving Wayne an award for a single performance almost seems beside the point. Wayne was a career actor, his persona being as much about the characters he played as what was written in the script. And he was a consummate movie actor, someone who understood that the understated line reading, grimace, or swaggering walk played a thousand times better in a movie theater than a monologue. Wayne didn’t do monologues. He gave performances, movie performances, performances that played right into the lens of the camera. He laughed like he was having a good time, swung a punch like he meant to bust your jaw, and extended his hand like someone who actually gave a damn. And you know who noticed that more than anyone? Other actors.

It’s no secret that actors loved working with John Wayne. One of them was Hepburn, who worked with Wayne in Rooster Cogburn in 1975, one of Wayne’s last movies. Hepburn became a star long before Wayne, even though he had started in movies first. She won her first acting Oscar for only her third movie, a stage-to-screen adaptation of Morning Glory. But Hepburn had to build to a more natural, nuanced presence onscreen in the early-to-mid-‘30s, while Wayne had it from the start. When the two finally worked together, decades later, she was impressed with what she saw. In her autobiography, Me: Stories of My Life, she wrote of Wayne, “[a]s powerful as is his personality, so too is his acting capacity powerful. He is a very very good actor in the most highbrow sense of the word. You don’t catch him at it.”

No one ever caught him at it. It’s why decades after his death, he still gets called out by know-nothings angry about matters entirely unrelated to his acting for “just playing himself” even though that’s about as great a compliment as you can give an actor. He played himself, yes, in a variety of different situations and he never oversold it or undersold it. Most importantly, as a movie actor there at the start of the sound era, he understood it, immediately. You can see it from his earliest work in the ‘30s to his last work in the ‘70s. He didn’t grow as an actor in the cinema so much as the cinema grew around him. In 1939, when his big break finally came in John Ford’s Stagecoach, most everyone in Hollywood had figured out how to act for the camera instead of the audience, but Wayne got there first. And up to his last movie, The Shootist in 1977, there was still no one who could do it better.