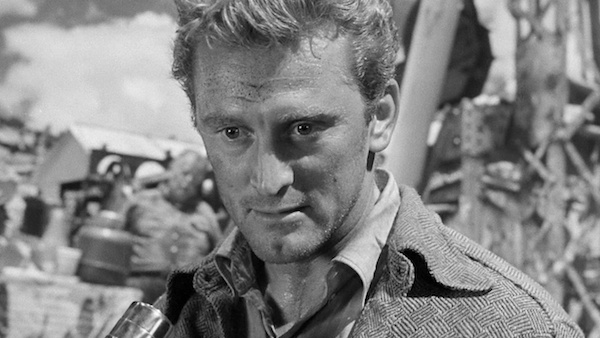 Kirk Douglas in 'Ace in the Hole'

irk Douglas, born Issur Danielovitch Demsky on December 9th, 1916, died Wednesday at the age of 103. In the countless tributes and obituaries to the Hollywood icon, one talking point keeps popping up: Champion, the 1949 boxing drama directed by Mark Robson, made him a star. Baloney. Kirk Douglas was a star the moment he walked in front of a camera.

In his 1946 debut, he had fourth billing after Barbara Stanwyck, Van Heflin, and Lizabeth Scott. In his debut! But more importantly was this: He played a weak character and every director and critic noticed how strong an actor he was. Let me unpackage that differently: He played a weak character, a man dominated by his wife, so well that he was at once completely believable in the role and also immediately recognizable as an actor who could play a tough guy.

Figure out the calculus on that one and you’ve figured out the secret to Kirk Douglas.

Before his debut role was even a year old he was playing Whit in Jacques Tourneur’s 1947 noir masterpiece, Out of the Past. Whit is a ruthless son of a bitch, trying to control the equally ruthless Kathie (Jane Greer), and hoping to manipulate former partner Jeff (Robert Mitchum) into doing the dirty work for him. More than anything, Out of the Past showed just how much intensity Kirk Douglas had as an actor. His very next movie, I Walk Alone, his first pairing with friend and frequent co-star Burt Lancaster, had him again playing the kind of sleazy manipulator he had pulled off so well in Out of the Past. Had Douglas played the heavy for the rest of his career — the fate dreaded by Rick Dalton as Once Upon a Time … in Hollywood begins — no one would have been surprised, he did it all so well. But somehow, someway, he became a star, because even when he was playing sleazy, he was likeable. More than likeable, he earned your respect.

All of this paved the way for Champion, which earned him his first Oscar nomination and, as the story goes, made him a star. And it’s true, Champion did indeed put Douglas on the A-list. But he stayed there because of the choices he made, not because of the whims of starstruck moviegoers.

Despite his newfound A-List status, Douglas didn’t back off from playing characters of questionable ethics. From Young Man with a Horn and Ace in the Hole, to Detective Story and The Bad and the Beautiful, Douglas reveled in playing complex characters that made moviegoers question whether they hated the character or the actor.

Throughout the fifties and early sixties, he expanded his roles beyond the troubled cynics to westerns (Along the Great Divide, The Big Sky, Gunfight at the O.K. Corral), adventure (Ulysses, 20,000 Leagues Under the Sea) and period biopics/historical dramas (Lust for Life, Spartacus). If it was the cynical roles that cemented his reputation for intensity, it was these later roles that cemented his box office popularity. But his best role of the fifties, perhaps of his entire career, was in a movie that did almost nothing to boost his box office: Stanley Kubrick’s 1957 masterpiece, Paths of Glory.

Paths of Glory revolves around the court martial and execution of three French soldiers — a Corporal and two Privates — held up as scapegoats for a horribly miscalculated attack planned by cowardly and moronic generals that fails miserably. Douglas, as Colonel Dax, fights the indifferent powers that be in an effort to put the blame where it truly lies and it's the best performance of his career, displaying all the familiar intensity, as well as empathy, courage, and despair. It also marked a turning point for his onscreen portrayals.

After Paths of Glory, Douglas leaned into playing morally courageous characters fighting against impossible odds. His title role in Spartacus (1960) is justifiably famous, as is his Colonel Casey in Seven Days in May (1964), desperately trying to stop a military coup in the United States of America. And his personal favorite role fell into this category as well, Lonely are the Brave, about a cowboy in the modern world breaking the law to correct a social injustice.

In reality, these roles came easy to him because that’s who Douglas was, in the flesh, off the set. His much-ballyhooed refusal to use a pseudonym for Dalton Trumbo on Spartacus is an admirable case of standing up to the industry that sought to kill Dalton Trumbo's career for being a member of the Communist Party during the thirties and forties. Hollywood blacklisted him (the original cancel culture!) and Douglas said, “Go to Hell.”

After the sixties, Douglas still took risks, even if the movies weren’t as good. Some of them, like Brian De Palma’s The Fury (’78), still count among Douglas’ best movies, while others, like The Final Countdown, have become fan favorites over the years but both of these, as well as Saturn 3, show an actor not afraid to embrace a whole new genre late in his career.

Kirk Douglas began his career by playing a weak, little man and was strong enough to turn that opportunity into one of the most successful careers in Hollywood history. When you hear that Douglas was one of Hollywood’s tough guys, it’s true. Only not just in the movies, but in his heart, mind, and soul as well.