'Little Women' Will Be Fine Without Men 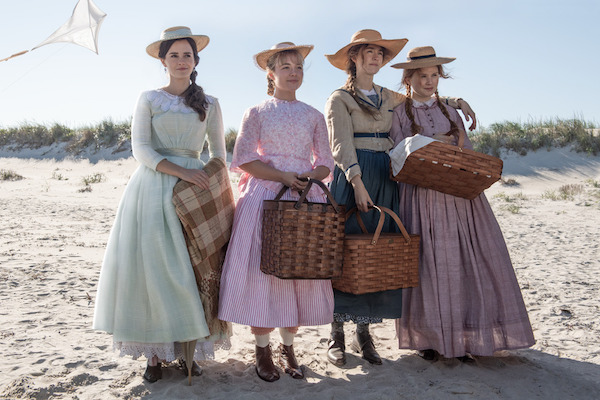 'Little Women' Will Be Fine Without Men

The structure of the movie — cutting between the decades, from the women all grown to their time as teens and back again — serves to jumble the narrative for those who have seen this story over and over (and over and over and over) again, making it feel fresh. But it also serves as a comment on the story itself, a rejoinder by Gerwig against pressures from studios and book publishers to craft a “happy” ending, at least insofar as “happiness” means “women settling down with, and settling for, men.”

Jo (Saorsie Ronan) in particular chafes under this requirement. As we cut across the years, we see Jo reject Laurie (Timothee Chalamet) while proclaiming that she will never marry; this is also how she hopes to end the book she’s writing, with the lead having chosen spinsterhood over economic subjugation at the hands of some man and the patriarchal system he has erected to demean womanhood. But the economics of art being what they are, she must compromise her vision to secure the lucre that will come with publication of her story.

Turns out, Jo is right: Little Women doesn’t need men. As Scott Mandelson noted in his box office roundup, the movie is a hit despite audiences being overwhelmingly female:

History shows, think Twilight, Mamma Mia, Fifty Shades of Grey, Pitch Perfect, etc., etc., that a movie like Little Women doesn’t need dudes to show up in theaters for it to be a hit. For reference, it played 66% female and 56% over-25. So, yes, 1/3 of the viewers this weekend were men.

This is why it’s so … odd that the discussion surrounding the film has focused on men who refuse to see this movie that was definitely not made with them in mind. The New York Times and the Washington Post have both come out swinging against big men who refuse to engage with their inner little woman.

But, again: Little Women doesn’t need men. It's found a perfectly good audience without them. And this has been a recurring theme of mid-budget releases in recent years. Outside of your standard enormous blockbuster type movies — your MCU mega-movies and your wars amongst the stars, that sort of thing — studios are finding great success by targeting specific audiences and turning them out. Screenwriter Zack Stentz had an interesting thread about this on Twitter a few months back:

The business lesson of the last few years is clear-cut: Find an audience that’s underserved by what’s currently in theaters and turn them out. That’s how you get Ford v. Ferrari (dads) over $100 million domestic. It’s how you get Little Women and Downton Abbey (older women) near $100 million domestic. It’s how you get a whole studio ecosystem out of the Tyler Perry expanded universe (African-Americans). It’s how you turn Crazy Rich Asians into a legit blockbuster (Asian-Americans). Audiences will show up if you give them something they aren’t getting from the blockbuster ecosystem. Audiences are hungry for something distinctive. And, most importantly, these audiences are all different, and looking for different things.

You just have to figure out how to target them and give them what they’ve been missing out on.