Once Upon a Time … in Sundance 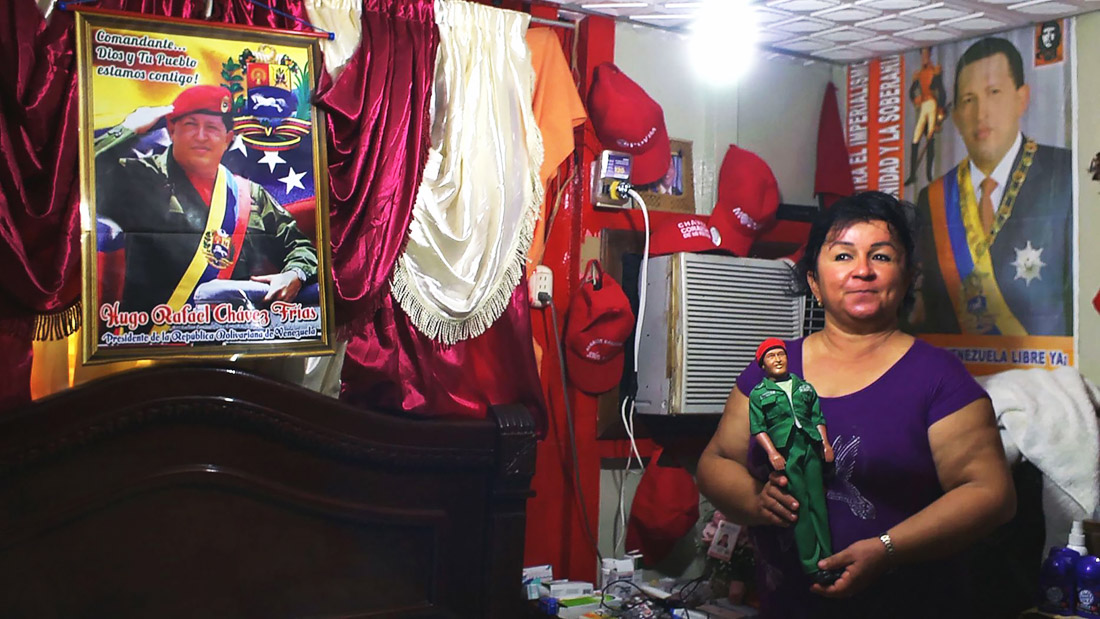 Once Upon a Time … in Sundance

irector Anabel Rodriguez Rios introduced her film “Once Upon A Time in Venezuela” to an audience at the Sundance Film Festival on Friday by saying that she had made her film "for the 5 million Venezuelans in exile due to a totalitarian government that is crushing us and ripping our families [apart] ... us, the filmmakers, we had to escape from the government."

I blinked, wondering if I was dreaming or had wandered into Bizarroworld Sundance. I had not planned to see “Once Upon A Time in Venezuela” when I arrived in Park City, Utah. I dismissed the film based on the festival description as likely just another bit of Chavista propaganda about Yanqui imperialism and global warming and blah blah blah. But a liberal critic friend who had already seen the film said it was very far from that and he’d be curious what I’d make of it, especially the film’s most unapologetic champion of dictator Nicolas Maduro.

I’ve seen better films than “Once Upon A Time in Venezuela” (though it is very good). But I’ve never seen a film like it at a major North American film festival: both a lovely, poetic piece of documentary cinema that clearly deserved to be there on aesthetic merits and a relentlessly critical look at life under a left-wing Latin American regime that has been the object of praise, if a bit less frequently more recently, from the sort of liberals and leftists who program such festivals. (Also playing at Sundance: Hillary Clinton and David Hogg puff-docs and at least two features being pushed officially here by Planned Parenthood. The few conservative festival-goers like myself acquire passive immunity, eventually.) I happened across Ms. Rodriguez Rios in the hotel shortly after the screening and told her I was shocked to see a film like hers play at a place like Sundance, and she agreed with an “I know.” This occurred a couple of hours after the person who introduced Rodriguez Rios before the screening pre-spun the film to make it a bit more palatable for the native Sundance-ite, saying it was about what happens when there is “disregard for true democracy.”

Maduro’s “totalitarian” impulses are not scrimped on in the radio speeches we hear — we never see him, befitting the film's observational approach and focus on one small community, the fishing village of Congo Mirador. “You will never govern this country again,” Maduro thunders in one broadcast, essentially vowing not to obey democratic norms. In the same broadcast, he called on “the Bolivarian army” (not “the Venezuelan army,” making the military a partisan tool … imagine an American president referring to “the Republican army” or even “republican”), telling them to make ready to protect “the right to live in peace.”

But the biggest character in “Once Upon A Time in Venezuela” is Tamara Villasmil, the mayor of Congo Mirador, where people have lived for generations in homes on stilts. To call Villasmil a Hugo Chavez groupie would be unkind to all the relatively discerning female fans at Bon Jovi, Aerosmith, and Queen concerts. She has an enormous Chavez poster on her door and tells the film crew that you must touch it to enter her home. At other moments, she kisses a Chavez doll and says that even though she no longer has Chavez around, “when I vote Maduro, I see Chavez.” Her credo: “Even without food, without water, without a place to sleep, I’m fine as long as there is a revolution.”

Her main antagonist is a schoolteacher called Natalia, a Chavismo skeptic whom Villasmil threatens to purge, saying “your time is over.” Later, the mayor says she is to blame for the school’s declining enrollment and/or poor performance, saying “you don’t love the children enough.” In one of the film's funniest moments, a Chavez-Maduro backer is walking around the classroom berating Natalia for not using the provided supplies, including a box of pens. She learns in real time that they don’t write, in a gesture every American office scrub ever has done. By the end of the movie Natalie is gone, but the school hardly has any pupils for reasons I’ll discuss later. But at least ideological purity has been achieved, for the fewer still around.

The political corruption is absolutely shameless. There is one scene in which Villasmil tries to call in a shipment of smartphones to give away to Maduro supporters and is perturbed when she procures fewer than she wanted. In another scene, she tries to persuade a woman to vote for the Maduro ticket as she hands her a kid’s backpack, bags of rice, and other foodstuffs. (Keep in mind the film’s camera crew is sitting right there on the boat, getting the footage we’re seeing.) The mayor suggests in parting that the peasant woman get her husband to vote Maduro, using what I’ll call the “Lysistrata” strategy. On election day, Maduro teams hand out money more openly than even Chicago Democratic ward-heelers would dare, and residents discuss to the film crew how much they took or were offered. After the last question in the post-film Q-and-A, Rodriguez Rios reminded the departing audience to vote for her film for the Sundance audience award. “We’ll have the money for you when you get outside,” she joked, to everyone’s laughter. She had earlier, in the Q-and-A proper, suggested that the crew was able to capture such footage because the Maduro backers let her crews film them because it was “a cultural thing; they did not think to be discreet.”

If I’m leaving the impression “Once Upon A Time in Venezuela” is merely an anti-Chavismo polemic … my apologies. It’s also a smartly observed film that makes its points with grace notes and well-chosen moments and details, like the amount of bread Villasmil takes away from her post-election station. When the anti-Maduro forces win a majority in parliament (a body the dictator promptly undermines), there’s not only partying in the streets but also the first appearance of the thunder-free “silent lightning” that marks the region and which began the film. The film wasn't one of the high-buzz titles at Sundance, but it was well-received by those critics who did see it, including at RogerEbert.com.

Two memorable images of rot and rust close the film, serving as visual metaphors for the once-wealthy nation’s catastrophic decay.

Congo Mirador sits on Lake Maracaibo, the center of the nation’s vast oil production. Over the duration of the film, houses have been moved on boats as the muddy sediments turn the area into something closer to an encroaching swamp until the town barely exists, and the school is down to a couple of students by the end of the three to four years the film covers. One of those images is of a shack, which we’d seen before, and had “Chavez” painted on it graffiti-style. The other is a massive ship named “Venezuela” (yes, really). Both structures are decayed unto death. Rodriguez Rios and I agreed in our hotel-lobby conversation that the latter would have been too on-the-nose to include in a fiction film. But she said in that same short talk that one of her major influences was the canonical Latin American novel “100 Years of Solitude” by Gabriel Garcia-Marquez and the way he used environment to reflect the characters and the human institutions. She also, without elaboration, said in the audience Q-and-A that the film was an “allegory.” This was a fascinating and helpful bit of information because one of the few criticisms I would have otherwise have made of the film is that it isn’t specifically clear on why the town is going into the crapper. We can infer it has something to do with oil production and pollution, but it’s all rather vague. But with Garcia-Marquez in mind … exactly.

There is one scene that holds out hope for a moment of clarity for the Chavistas. Villasmil travels to the Maracaibo to meet with provincial-government leaders over breakfast, intending to alert them to the state of the village and the sediment. She’s brimming with high hopes, comparing the meeting to Barack Obama’s visit to Cuba. In the meeting, she says “Congo is running out of time ... (once there) were 700 residents. Now it’s 300 or 400, and that only because of fishing. Only about 30 families are permanently here.” But the higher-ups are hardly interested and one is even yammering away on his cell phone mid-meeting. The look on Villasmil’s face as a plate of scrambled eggs sits in front of her is the look of someone who’s just realized she will not get what she needs. What’s the use of ruling the roost, I asked in a review I wrote for another outlet, when the roost is disappearing out from under you?

I asked Rodriguez Rios during the audience Q-and-A (close as I can recall), “that look on her face, and concerning an issue that’s greater than party politics: ‘This village may not survive,” did she learn anything from that? Did it cause her to question Chavismo? That look sure suggested it.”

Rodriguez Rios said it did not. “It’s still convenient for her to back the party.” And so it continues. The film is “dedicated to the people of Congo Mirador, wherever you are.” The Sundance film festival program notes describes Rodriguez Rios as a “Venezuelan filmmaker … based in Vienna.”