Or, How I Learned to Stop Worrying as a Christian and Love 'Pulp Fiction' 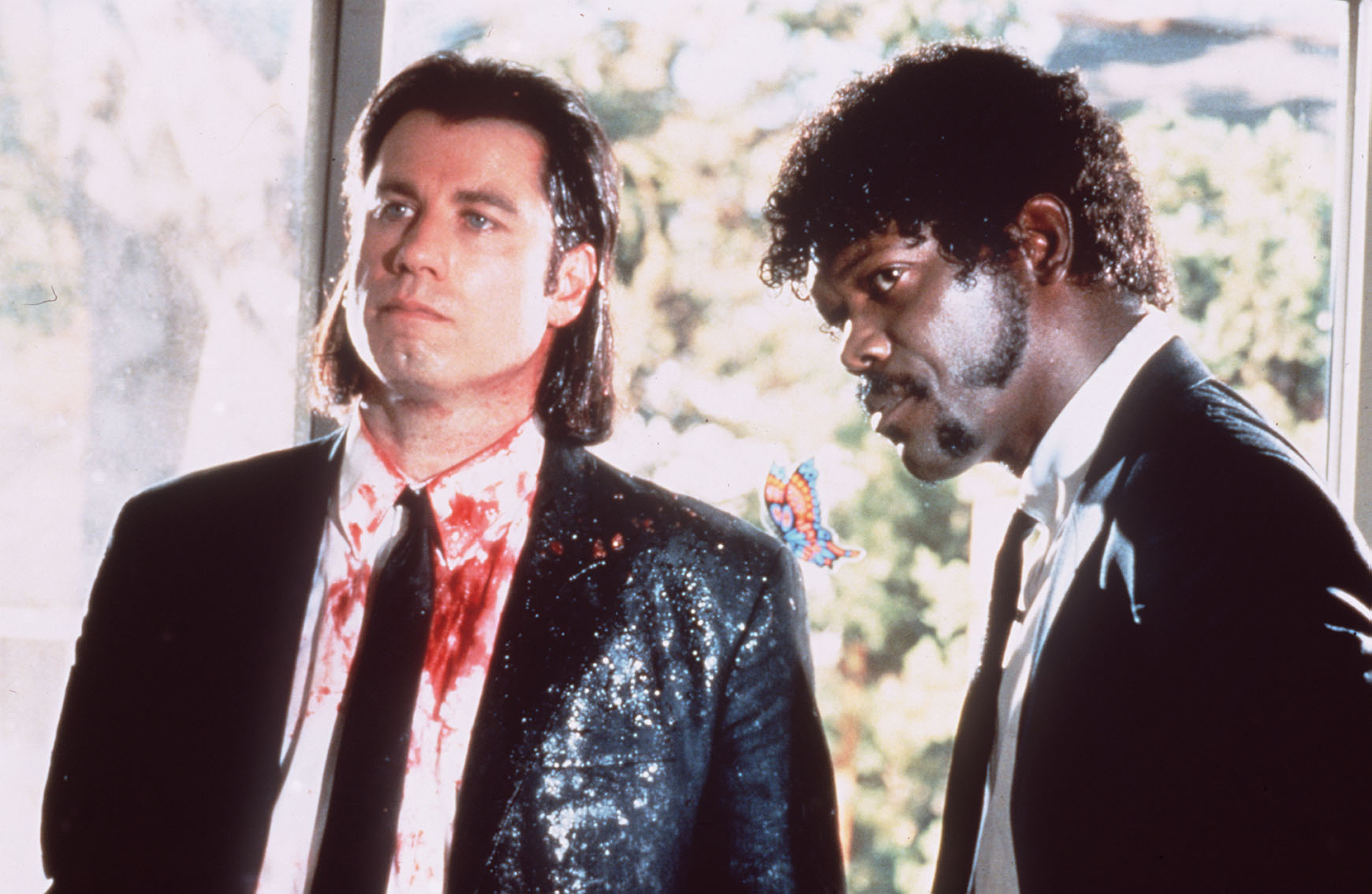 Or, How I Learned to Stop Worrying as a Christian and Love 'Pulp Fiction'

use the following allegory from the perspective of a devoutly religious man: If it’s midnight and you’re driving past a tavern and come upon two drunks beating the brakes off each other in front of the establishment, I’d put cash on the barrelhead that both parties are Christian men. At the very least, true believers in some higher power. I find secularists just can’t summon the passion needed for an honest fistfight. Believers however? We throw down. Especially when we’re pickled in alcohol.

Zealots are passionate, almost by obligation. If they’re honest with themselves, and their biblical heritage — Noah, a heroic Hebrew if ever there was one, reached the craggy shore and immediately went on a decent drunk; Moses killed a man; and Solomon had sexual surrogates in the hundreds, worshipped Ashtoreth, and still wrote three chapters of the Old Testament — they hold a provisional truce with the turbulent content of humankind. We Christians call this sin. We also call it imperfection.

This doesn’t mean we embrace sin. Or celebrate it. On the contrary, we simply recognize its genetic perseverance and seductive prowess. Much like children poking sticks into flame, hoping to not get burned and getting burned all the same, we respect fire even while we’re dicking around with it.

I consider my love of cinema to be dicking around with that ancient, heathen fire.

And yet conceding this principal failing, without redemption or justice, a film can feel base, and borderline nihilistic. (See, e.g., Lars Von Trier.) It is our infractions that make us human. Being brought to heel for them however? Divine. Try to find me a single character in Pulp Fiction — in any Tarantino film, really — that escapes their world of licentiousness without going through pure hellfire before being granted either clemency or extended damnation. Sure, Quentin Tarantino has his predilections for gore and sadistic sensationalism, but there’s a very credible propensity toward penalty in his work.

A swastika carved into the brow of the figurative Nazi agent, if you will. A divine five-point-palm-exploding-heart-technique, if you prefer.

Vincent Vega (John Travolta) struggles with the temptation of adultery much the same as Joseph did with Potiphar’s bride. (“So, you're gonna go out there, drink your drink, say ‘Goodnight, I've had a very lovely evening,’ go home, jerk off. And that's all you're gonna do.”) One could argue that this simple bypass of infidelity granted him providence when Man #4 (Alexis Arquette), previously hidden in the bathroom, kicked open the door, screamed “DIE YOU MOTHERF*****S!” and unleashed hell with a Taurus Model 689. Vincent was spared: for the time being. We get the sneaking suspicion that it is his denial of celestial thaumaturgy that ultimately becomes his mortal downfall. Or perhaps he really screwed over his atonement when he accidentally shot Marvin in the face? Divine superintendence strikes a very sticky balance indeed.

Butch’s (Bruce Willis) transgressions are much more nuanced. He reneges on a contract to throw a fight before forgetting (what any prosperous fortune teller would have appreciated as extraordinarily accursed) his father’s gold watch. He suffers, but his wounds are mostly superficial. And dare I repeat the fate of Marsellus Wallace? Much like King Nebuchadnezzar, Wallace suffers humiliations and degradation few would dare imagine.

These people that inhabit Quentin’s kingdom, and we should never forget that it is Tarantino who has usurped the throne of magisterium in his screenplays (he is the redeemer and salvation), don’t just play with fire. They get burned as well. Sometimes beyond recognition.

Jules Winnfield is the only character in Pulp Fiction to openly acknowledge divine intervention. Though he’s a vegetarian, we can only presume he’s lived a life of notoriety and murder. The load-bearing wall under the burden of his sins, splintered and fractured, is still sound in retrospect. A bit of provincial spackle and tape, and all can be forgiven. (Matthew 11: 29, 30)

Jules is later tested in the conclusion of the movie. If he is truly to be absolved of his transgressions, will he himself grant absolution? Or will he fall into old patterns, pull his gun, and violently end the lives of his transgressors? In one of Quentin Tarantino’s best-written sermons — for Winnfield’s final address is indeed a sermon — Jules closes by admitting: “The truth is you’re the weak. And I’m the tyranny of evil men. But I’m tryin’, Ringo. I’m tryin’ real hard to be the shepherd.” And with that he walks off into the sunset. Soul on the mend.

I will openly acknowledge that this exegesis might just be conflated self-acquittal. And if it is? Maybe I’m just a bad Christian after all. I was once nearly excommunicated from my fundamentalist Christian church for a review I wrote for a Charlize Theron movie. I can only guess the reasons as to why. The review was fairly tame by industry standards. In my defense, I stubbornly believe art is in the eye of the beholder, and cinema just happens to be the art I admire the most, the artistic medium I’m willing to risk theocratic exile over. I think my real crime, as far as my congregation was concerned, was taking it public. Religion doesn’t always handle publicity and honesty with the grace it so rings from the pulpit and steeple. Which is why I chose a flagrantly faux pseudonym to write under now. I still need the grace part. And, God willing, this is still a free country.

There is much I admire about Pulp Fiction. And perhaps I’ve been blinded by the dazzling writing, the eccentricity of character, and feel the need to excuse why I believe it’s not just one of the most important cinematic watershed moments of all time, but is clearly, in my opinion, the greatest display of natural screenwriting ability the medium has ever been gifted.

As for my admiration of Tarantino’s second feature film — even while I acknowledge that its language and subject matter would singe the hair under any religious habit — I can only default to the state I was created in. Imperfection. But I’m tryin’ Ringo... I’m tryin’ real hard.

Pedro Schwarzenegger is a true Northman. A savage man in a savage place and time. His taste in cinema? Savage. And yet he does all his writing on an iPhone, like some kind of candy-ass millennial.