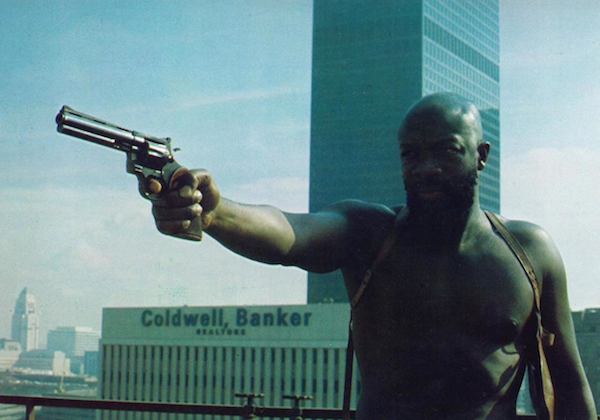 Welcome to “Original Outlaws,” a column that seeks to canonize cinema’s greatest works of exploitation. Think of it as the Criterion Collection of skeeze and sleaze: a discovery portal for those looking to dive into the deep end of disreputable filmmaking.

here’s a solid story revolving around the opening shot of Shaft (1971): an introduction so brilliant it made Richard Roundtree’s black private dick (who’s a sex machine for all the chicks) a living icon before he even has a chance to open his damn mouth. Director Gordon Parks — not to be confused with his son, Gordon Parks Jr., who would helm the far more radical Blaxploitation staple, Superfly (1972) — instructed his New Rochelle-born and bred star not to look when he crossed the street. Being from the suburbs, this made the classically trained Roundtree anxious, but the consummate professional took the note in literal stride.

That’s what lends the set-up a naturalistic pop. When that cab almost hits John Shaft as he crosses the busy Manhattan intersection, Roundtree is actually pissed yet doesn’t seem surprised. He simply flips the driver off and tells him to watch where the fuck he’s going. All due respect to Idris Elba, but Black Superman was born on that day. Shaft doesn’t stop for traffic. Traffic stops for him.

After that, every Bronx-bred brat wanted to be Shaft, and Blaxploitation* — a sub-genre that studios desired to capitalize on following the box-office success of Ossie Davis’ Cotton Comes to Harlem (1970) — suddenly had a heyday on its hands. With the help of Melvin Van Peebles’ Sweet Sweetback’s Baadasssss Song (1971), Shaft showed producers that there was an entire market dying to see their image projected up on that screen. As is the way with anything that makes money, a slew of imitators (both great and poor) found their titles slapped on Deuce marquees, begging the dirty streets’ denizens to discover new smooth operators to worship.

Through the mid-1970s, the subgenre evolved into a formidable vehicle for cinematic protest, with entries such as Christopher St. John’s Top of the Heap (1972) and Sweetback sending people filing out of dingy auditoriums to collect their dues**. The lo-fi craze also allowed beefy funnyman Rudy Ray Moore to reinvent comedy in his own likeness, via his pimp persona in Dolemite (1975) and The Human Tornado (1976). There were even Westerns, with former football stars like Fred Williamson strapping a six-shooter on his hip in The Legend of N—r Charley (1972) and Boss N—r (1975), the latter of which was directed by Universal Monster/sci-fi shocker legend Jack Arnold. Some of the wildest entries, such as the lo-fi psychedelic satire, Darktown Strutters (1975), defy categorization at all.

Meanwhile, well-intentioned white journeyman Jack Hill returned from the Philippines, where he’d met the luscious, vicious Pam Grier while helming two preeminent Women in Prison pictures: The Big Doll House(1971) and The Big Bird Cage (1972). Knowing damn well she was the fierce black superstar to deliver the female anti-hero that Blaxploitation needed, Hill helped transform Grier into a one-woman hit squad in Coffy (1973). Then he sent her undercover as Foxy Brown (1974), the high-class hooker with vengeance on her mind. Both movies sizzle with raw authenticity, as Hill insisted that he follow Grier’s every artistic intuition, letting her define what black life looked like in Los Angeles’ San Fernando Valley.

Unfortunately for some in this concrete sandbox, not everyone could be Pam Grier. She parlayed her success into becoming a mainstay well past the era’s prime (including her most recognizable role in Quentin Tarantino’s 1997 film Jackie Brown). Roundtree was only paid $12,500 for his first go as Shaft, though he at least received multiple sequels, both in theaters (1972’s Shaft’s Big Score!, 1973’s Shaft in Africa), plus a run of CBS movies of the week. The Sam Jackson-fronted revival resurrected Shaft , which yielded John Singleton’s undervalued studio reboot, Shaft (2000), as well as Tim Story’s Shaft (2019, are you confused yet?), which reduced the towering giant to a sitcom-ready unwoke drunk uncle.

Isaac Hayes didn’t enjoy the same longevity as the man for which he provided a theme song. Hayes was a Stax Records producer who penned several hits, including Sam & Dave’s “Soul Man,” before getting lost at the movies. He was never offered a franchise beyond concert films featuring his gold chain-decked, bald Adonis alter-ego, Black Moses. In fact, by the time Hayes found himself in a starring role, the Blaxploitation boom had practically come and gone, producing an entire library of films (most of them awful).

That brings us to Original Outlaw Spine #2: Truck Turner (1974). Hayes plays the titular skip-tracer, who couldn’t be further from Roundtree’s private eye if he tried. Instead of emerging from the underworld like some leather-clad god, Truck’s partner, Jerry (Alan Weeks), has to call and wake him up to make sure they get to snatching bail jumpers. Truck’s apartment? Littered with McDonald’s wrappers and unsheathed Otis Redding albums. The shirt he tosses on? Just got pissed on by his cat, Francis. His woman, Annie (Annazette Chase)? Locked up for boosting cars. Sure, the opening wah wah-flavored theme sounds eerily familiar to Hayes’ previous Oscar-winning riff, but it’d be tough to imagine this L.A. tough guy hanging in NYC bars with Shaft, ya dig?

Yet no foul-smelling Canadian Tuxedo is going to stop the former football great from becoming Blaxploitation’s most coolly capable crusader. The first act sees Mack “Truck” Turner forcibly hauling a child rapist from a military base before being sent after a pimp named Gator (Paul Harris) thanks to the hustler jumping a $30K bail on a lousy, pink-suited bondsman (the irreplaceable Dick Miller). Since Gator’s got two priors — including setting a woman’s hair on fire and carving his initials into her old man’s face — Truck demands a grand apiece for their services, which the slimy reprobate has no choice but to pay. Nobody else is man enough to nab this dirty scumbag.

Like many who helmed contributions to the Blaxploitation canon (Hill, Arnold, Larry Cohen), Jonathan Kaplan was white. A former child actor who had been recruited by Roger Corman following his studies at NYU and subsequent PBS editorial work, Kaplan proved himself a resourceful asset on titillating oddities, Night Call Nurses (1972) and The Student Teachers (1973). He also helmed the prison heist picture, The Slams (1973), for Corman’s brother Gene, which starred one of the original black superstars, Jim Brown***.

What Kaplan brings to Truck Turner is an adept sense of construction and character, with stand-out action sequences that adhere to Corman’s winning low-budget theory: “Either sex or violence must occur every 10 minutes.” At the finale of Turner’s first 30, there’s a lo-fi set piece that’s as thrilling as it is dangerous. A car chase (where Jerry blasts a revolver at Gator from a convertible) gives way to a foot chase and ends in a bar fight the pimp stages for $50 (that’s as bruising as any Shaw Bros. battle). The whole thing predates Kathryn Bigelow’s multi-environment Point Break (1991) pursuit by nearly 20 years. The final line uttered by a whipped civilian: “If I woulda known that was Truck Turner, I woulda asked for more than 50 dollars.”

Eventually, Gator gets wasted, setting his woman, Dorinda (Uhura herself, Nichelle Nichols), on a relentless rampage of revenge. From this point on, Truck Turner practically becomes the Blaxploitation equivalent of Batman (1966), introducing a rogue’s gallery of cartoonish villains at possibly the greatest funeral ever filmed (each Mack sprinkling a little coke on the corpse to help usher Gator into the next life). Amongst them: Harvard Blue (Yaphet Kotto), who’s got no love for Dorinda but will gladly take up the bounty on Truck’s head if it means he can collect her stable of international pussy as the reward.

“What you see ain’t all you get. This ain’t Sears Roebuck, n—r.”

While Kotto is always a welcome presence**** in any picture, Truck Turner is all but stolen by Nichols. Almost every line Dorinda spits is an acidic all-timer, as she puts every man who crosses her path (including Truck) in their place. It’s a heel-turn for the ages as Nichols digs into the character’s explosive mixture of sex and violence, creating the anti-Foxy Brown. If you cross her, you’ll be selling that ass in Iceland, because Dorinda is the baddest bitch of all, and these streets belong to her and her exotic harem.

Returning to the film’s namesake: it’s a real shame Hayes didn’t get a string of Truck Turner pictures, as he owns a real knack for tough-guy dialogue, his throaty bark lending each line a sense of brusque charisma. But there’s also a wounded everyman humanity Hayes conveys; potbelly out and having his feelings hurt whenever Jerry ribs him about his lady being a thief. If Blaxploitation was partially about the audience finally getting heroes, then there’s something to be said about Mack “Truck” Turner’s level of relatability. He’s a working-class lug just trying to make a dollar in this senselessly violent jungle.

Alas, Truck Turner was ultimately a victim of poor timing, arriving at the tail end of the Blaxploitation boom, and barely making a dent at the box office. As a result, Hayes always felt somewhat left behind by a movement that was supposed to support black artists like himself and would go on to be known by generations to come as the voice of Chef on South Park (after guest stints on The Rockford Files). The performer then had his mind warped by Scientology, which would cause Trey Parker and Matt Stone to bestow the animated character with quite the embarrassing screen death, following his abrupt departure from the Comedy Central series.

But we’ll always have Truck Turner and are forced to wonder what could’ve been had the bounty hunter’s release swapped places with Shaft in 1971. Or maybe it all worked out the way it was supposed to. Truck exists in our memory, a legend of a time long past. Shaft, meanwhile, has become a corporate plaything, a plastic action figure that treats representation as a box to be checked off instead of creating flesh and blood human beings — like Mack “Truck” Turner.

*With apologies to Fred Williamson, who notes that the term is strangely derisive for such a celebrated genre.

**In another stroke of Jerry Gross marketing genius, all posters for Sweet Sweetback declared the movie had been “rated X by an all-white jury.”

***This was also right around the time when Brown, whose popularity exploded following Robert Aldrich’s The Dirty Dozen (1967), began to gain the career-addling label of being “difficult.”

(This article would not have been possible without the writing of Joe Bob Briggs [particularly his unimpeachable book of criticism, Profoundly Disturbing: Shocking Movies That Changed History!] and the recent Kino Lorber Studio Classics Blu-ray of Truck Turner.)