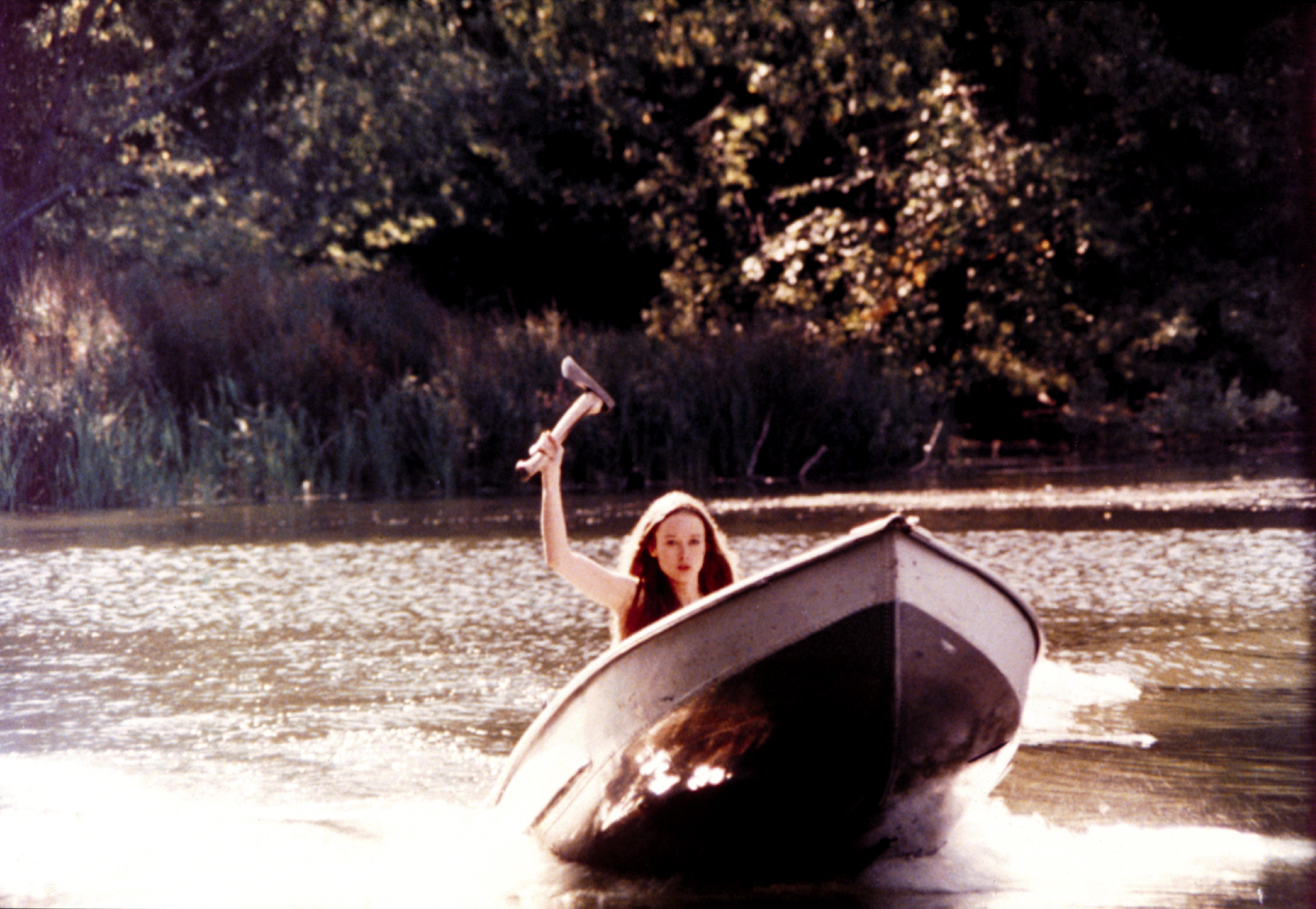 ‍Welcome to “Original Outlaws,” a column that seeks to canonize cinema’s greatest works of exploitation. Think of it as the Criterion Collection of skeeze and sleaze: a discovery portal for those looking to dive into the deep end of disreputable filmmaking.

Spine Number Three of this despicable film depository is arguably the most despised movie in exploitation history: Meir Zarchi’s rape/revenge shocker, I Spit on Your Grave (1978) …

“This woman has just cut, chopped, broken, and burned five men beyond recognition … but no jury in America would ever convict her!”

Before we get into Spine #4, something should be stated upfront: Roger Ebert was soft.

Sure, Ebert’s contributions to cinema criticism were legendary, bringing a pop sensibility to the form few (if any) really had, before or since. Championing pictures, both big and small, that otherwise went unnoticed or were brushed off entirely, the Chicago scribe and television personality famously embraced the movies as an “empathy machine,” allowing him to see through whoever’s eyes the screen belonged to for a brief two hours.

Regardless of his celebrated compassion, Ebert could also be a squeamish prude, calling for filmmakers’ blood if he thought their movies went too far in making him feel uncomfortable*. Consider his takedown of David Lynch’s Blue Velvet (1986), in which he admitted to “admiring the craft” the director employed but felt as if Lynch “took liberties” with his performers, labeling his tonal alternations between dark S&M drama and bubbly satire “sadistic.” Ebert particularly disliked how “raw” Isabella Rossellini’s performance was, wondering aloud why Lynch hadn’t “kept his side of the bargain” by surrounding it with an “important film.” Uh, okay Roger.

Still, Ebert’s Blue Velvet pan pales in comparison to his no-holds-barred evisceration of Meir Zarchi’s unflinching rape/revenge exploitation nightmare, Day of the Woman (1978). Reviewed during the 1980 re-release (for which distributor Jerry Gross gifted it the superior moniker, I Spit on Your Grave), Ebert wrote that watching Zarchi’s movie was “one of the most depressing experiences” of his life, casting aspersions not only on the writer/director’s “pile of garbage,” but labeling those who also took the picture in at the 1,700 seat downtown United Artists cinema palace “sex criminals.” After Spit’s grim finale, Roger writes that he walked out of the theater feeling “unclean, ashamed, and depressed.”

Good. In fact, one could argue that I Spit On Your Grave isn’t meant to be enjoyed by anyone – the dispassionate byproduct of its writer/director having witnessed the aftermath of rape and been so affected by the victim’s suffering that he decided to try and transmit that agony onto celluloid. With the aid of then-girlfriend Camille Keaton (distant relative of silent-film legend Buster), Zarchi endeavored to candidly present violation and all of its awful degradation, subsequently reducing the central heroine to little more than an animal, mechanically dispatching those who did her wrong. There’s no morality at play, simply hellish psychic pain, observed with the same lack of feeling or judgment as a court transcript illustrating our death angel’s hellish origins and single-minded path of destruction.

I Spit on Your Grave was inspired by an actual crime in which Zarchi incidentally became entangled. Flash back to October 1974: A woman is assaulted in New York City, stumbling out of Jamaica Queens’ Goose Lake Park, dirty, bloodied, and disheveled. Zarchi was the first person to spot her and aided the victim to safety. However, upon delivering the young lady to a local precinct, the Israeli ex-pat was horrified by how the cops treated her, interrogating the woman and making her feel as if she somehow provoked the attack with the way she dressed and acted around men.

“It was as if she was being raped all over again,” Zarchi said in numerous interviews. The experience disturbed the director — who had emigrated to the United States after working in his homeland’s film industry — to the point that he wanted to communicate just how awful her experience must have been and how seeking justice for the crimes via traditional channels was futile.

Thus, Jennifer Hills (Keaton) was born, as was an explanation as to why Ebert might have felt the way he did following that Summer 1980 screening. We’re never meant to experience anything beyond hurt and disgrace, as I Spit on Your Grave lets us see the horrible act through the young writer’s eyes. It’s a case where Ebert’s beloved “empathy machine” actually worked against his humanistic susceptibilities.

Despite the movie being based on Zarchi’s experiences, I Spit on Your Grave wouldn’t work at all if it weren’t for Keaton’s commitment. The actress imbues Jennifer with a free spirit and independence that’s senselessly ripped away by three thuggish rednecks (Eron Tabor, Anthony Nichols, Gunter Kleemann) and the village idiot (Richard Pace), the latter of whom they want to “get laid” for the first time.

A native of Pine Bluff, Ark., Keaton’s first acting gigs came courtesy of Italy’s exploitation circuit, playing the title characters in Massimo Dallamano’s schoolgirl horror show, What Have You Done to Solange? (1972), and Roberto Mauri’s erotica psychedelia, Madeline, Study of a Nightmare (1974). Neither of these roles required the same level of quiet despair and gut-check rage that Keaton employs in Spit, allowing the audience to fall in love with the writer amidst this idyllic, lakeside setting (which is still ominous, thanks to the movie’s lack of musical score), before making us feel her piggish brutalizers’ heinous thrusts.

At one point — during a second rape sequence that completes the movie’s near 30 minutes of sexual assault — Keaton lets out an ear-splitting scream that sounds as if it has slipped free from Hell itself. It’s an utterly fearless, and literally naked performance, as Keaton covers herself in mud, blood, and semen, all in the name of making a point about the dreadful realities of sexual violence. This is the stuff exploitation history is made of and only matched by folks such as Deborah Raffin, whose coed slave in Nightmare in Badham County (1976) endures similar torture at both the hands of a perverted male sheriff (Chuck Connors), as well as the Nazi-esque femmes who comprise the guard at a local prison camp.

A lot has been made over the years about how Zarchi and Keaton were in a relationship while I Spit on Your Grave was being filmed; the partnership preceded the couple’s brief marriage from 1979-82. Some of the picture’s harshest critics have even labeled it nothing short of a “fetish film,” as if Zarchi made the movie to get off on watching his girlfriend’s simulated rape.

Yet there’s nothing remotely stimulating about Spit’s sex acts, as they’re presented matter-of-factly, often captured in master shots and skewed mediums that allow us to mentally boil them down to mere flesh pounding upon flesh. Only Zarchi and Keaton’s real relationship could have enabled the movie to become so truthfully vile, mutual trust allowing them to reach such stunning depths of depravity.

As REBELLER columnist Joe Bob Briggs has noted in the past, I Spit On Your Grave shares a distinct similarity, plot-wise, to a movie that would arrive on a much bigger theatrical stage a decade later (not to mention win an Academy Award for its lead): the Jodie Foster-starring courtroom drama, The Accused (1988). While that movie closely mirrored Zarchi’s experience with the legal system — putting Foster’s traumatized target through a very public ringer — I Spit takes a much more primal approach to retribution. Sure, there are only four men, as opposed to the ill-famed tagline’s promise of five, and nobody gets lit on fire, but Jennifer’s brand of vigilante justice is just as drawn-out and agonizing as her own horrific ordeal.

In short, Zarchi tastelessly ensures his movie’s clinical catharsis equals its heroine’s protracted mauling. Like Thriller: A Cruel Picture (1974) before it, and Ms. 45 (1981) after**, I Spit on Your Grave utilizes multiple violative acts in order to break its eventual avenger down and also lingers on the aftermath for an unseemly amount of time. Yet this seemingly superfluous quantity is key not to only allowing us to see just how destroyed as human beings these women are, but to also revel in the release when they lay their swords down upon those who annihilated their spirits. It’s no different than your average Charles Bronson movie, only here the mustache would look rather funny on a lady’s mug.

Though she asks God for preemptive forgiveness, it’s difficult not to feel as if Jennifer’s enjoying her tormentors’ deaths, trading the black turtlenecks she hid her bruised and bloodied body in at first for sundresses and see-through gowns, and even tempting one of her prey into near sexual climax before lynching him. She’s a hunter, setting carnal traps for these animals, punishing them one by one as the audiences cheers this death sport, the same way they relished her rape. The difference is Jennifer’s violence is virtuous, as Zarchi has given us plenty of reasons as to why these men deserve to be wiped from the planet.

Despite Ebert’s petulant outrage and misplaced moral crusade — continued on the national airwaves thanks to the popular “Coming Attractions” program he hosted with Gene Siskel — I Spit on Your Grave went on to become one of the more influential rape/revenge exploitation pictures in history, its infamy ensuring its place on the exploitation canon. Thirty years later, Zarchi’s original spawned an eponymous, mostly worthless remake, plus two sequels, before the Israeli and his former bride returned for the epically long sequel, I Spit On Your Grave: Déjà Vu (’19).

Sure, having one of the most iconic posters in video history — sporting the dirty buttocks of a nubile Demi Moore*** — helped elevate Spit to another level in the sleaze canon. But, in trying to banish something he felt was barbaric, Roger Ebert inadvertently helped create a legend. Sometimes squeamishness backfires big time.

*See also Siskel and Ebert railing against Christmas slasher Silent Night, Deadly Night (1984), where they joined a chorus of PTA moms in getting TriStar’s movie pulled from auditoriums, lumping it in with the rest of the slashers Roger hated.

**Meanwhile, Wes Craven’s non-pornographic debut, Last House on the Left (1972), isn’t quite playing the same sport, riffing on Ingmar Bergman’s The Virgin Spring (1960), in which parents take revenge for their raped and murdered seeds.

***When Charles Band and Wizard Video acquired I Spit on Your Grave for the VHS market, Band was working (and rumored to be secretly dating) Moore while the two filmed Parasite (1982). Wizard was tasked with coming up with a new poster, which Band got Moore to pose for, resulting in one of the most recognizable one sheets of all time.