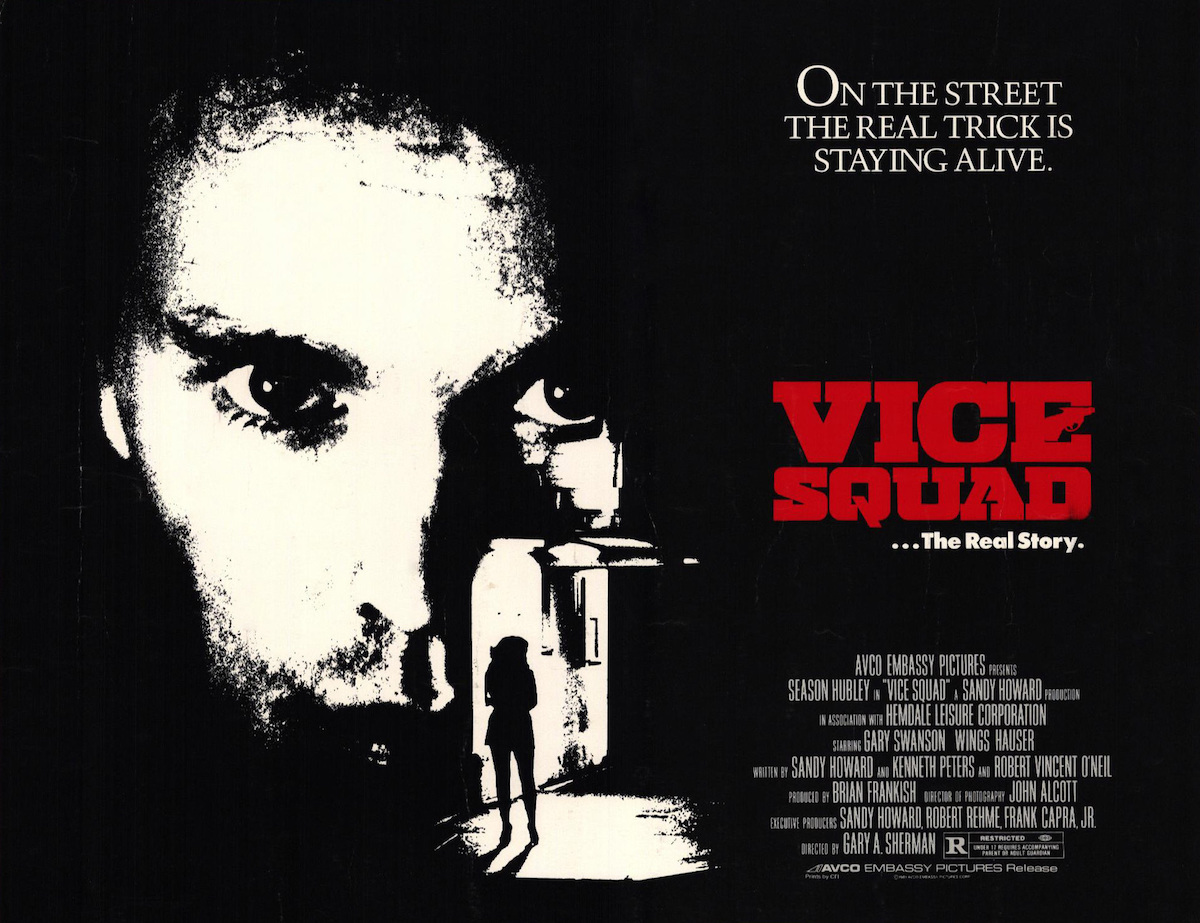 Welcome back to “Original Outlaws,” a column that seeks to canonize cinema’s greatest works of exploitation. Think of it as the Criterion Collection of skeeze and sleaze: a discovery portal for those looking to dive into the deep end of disreputable filmmaking.

ew artists have lived a life like Wings Hauser’s. The son of blacklisted Disney screenwriter Dwight Hauser, Wings grew up working backstage at a suburban theater company his pops founded following Hollywood exile. Despite being surrounded by actors during his formative years, Wings instead opted to become a musician, penning folk-rock ditties he’d sing on street corners for pocket change during weekend migrations back to the City of Angels.

Come 1972, Hauser broke up with his first wife, Margaret Boltinhouse, and moved back to L.A. with their three-year-old daughter, Bright, with nothing but $30, a suitcase stuffed with clothes, and a single box of Pampers. Shacking up in a vacant garage, fellow homeless folks babysat Bright while Wings worked various odd jobs (including a gig as a night watchman) before continuing to bark at the moon with his acoustic guitar in tow.

Despite releasing the ironically titled record “Your Love Keeps Me Off the Streets” in 1975, Wings’ music career momentarily died, and he took up acting to support his family. (He’d wedded fellow industry legacy, Cass Warner, in 1974.) Hauser joined the cast of The Young and the Restless as nice guy attorney Greg Foster, creatively “killing himself slowly” (as he’s mentioned in multiple interviews) in order to put bread on the table for the better part of the next decade.

Enter Gary Sherman. A Chicago hippie desiring to make political pictures with the aid of early mentor/Roger Corman acolyte, Jonathan Demme, Sherman migrated to the UK during the late 1960s. But before he departed, Sherman cut his creative teeth on a string of commercials and "music performance" films (such as The Legend of Bo Diddley, 1966). Combining his activism with early movie-watching memories, gazing up at Gothic horror such as Vincent Price’s House of Wax (1953), Sherman constructed Death Line (aka Raw Meat, 1972), a grimy indie ditty featuring genre staples Donald Pleasence and Christopher Lee.

Sherman was rightfully appalled, threatening to never return to feature directing again. Thankfully, the original cut of Death Line garnered many fans, including Alien (1979) co-writer, Ronald Shusett. Shusett had a script he (may or may not have) conceived the story for with fellow xenomorph madman, Dan O’Bannon — O'Bannon has, at times, disavowed all contributions to the project — titled Dead & Buried (1981). After almost a decade, Sherman’s big-screen retirement came to a close.

Dead & Buried became the second Gary Sherman flick to be mutilated pre-release. Much like Death Line, the moneymen deemed Sherman's latest "too cerebral."* Yet before the flummoxed filmmaker could make his way back to the commercial trenches, Bob Rehme — head of AVCO Embassy, the studio behind such John Carpenter greats as Escape From New York (1981) — said that he could make any project he wanted from a stack of scripts, promising to release whatever "Director's Cut" that Sherman turned in.

From the pile, Sherman selected Sandy Howard and Kenneth Peters' Vice Squad (1982), putting his head down and forgetting past follies by pouring all his aggressions into a page-one rewrite. Just as William Friedkin had done before him — teaming with detective-turned-actor/stuntman Randy Jurgensen on The French Connection ('71) and Cruising ('80)** — Sherman enlisted the help of the men and women who knew the scummy corners of Skid Row all too well in order to bring a sense of raw realism to his latest.

In a rather extreme act of artistic devotion, the director enrolled in an accelerated iteration of the L.A. Police Academy, taking on a training partner in Sergeant Doug Nelson (who became the film’s technical advisor). Sherman made busts, interviewed prostitutes, and even role-played as a perp, so that he could see the other side of an interrogation table through a criminals’ eyes. The time Sherman spent wearing a badge no doubt accounts for the authenticity Vice Squad (1982) owns from its opening frames.

Not so much a straight-ahead narrative as it is a “nights in the life” series of episodic lewd interludes punctuated by surges of neon-slathered graphic violence, Vice Squad isn’t shy about rubbing our noses on cum-stained motel bedsheets. Our guides to this apocalyptic vision of Los Angeles’ sex trade? A fantasy queen named Princess (Season Hubley) and a crew of hard-nosed dicks (Gary Swanson, Maurice Emanuel, Pepe Serna, Joseph Di Giroloma) who navigate a sea of limp-dicked johns and smooth-talking sugar pimps, all looking to take advantage of whatever trade will give them the time of day.

Sure, these girls will let you perform a golden shower, granted you got a hundred bucks and a six-pack of Coors handy. Who cares if the cops are watching? They’re just there to make sure nothing gets too out of hand: gunslingers in a modern Wild West. The closest thing we get to a “hero” is Princess, who morosely kisses her kid goodbye in the suburbs before transforming into a sexual superhero in an urban locker-room dungeon. It’s the Madonna/Whore dichotomy taken to exploitation extremes. We’re even treated to a surreal “funeral” sequence where the polyester harlot role-plays her marriage to a stiff in a mortuary. In short, as long as her seed gets fed when she gets home, Princess will make sure you get that nut.

Yet none of these colorful caricatures are as memorable as Hauser’s Ramrod, a rhinestone-studded cowboy from hell who isn’t shy about teaching his girls how to fall in line using a modified coat hanger “pimp stick.” The moment he’s crossed by Ginger (Nina Blackwood), Ramrod isn’t so much a man as he is a force of nature, tearing through scenery and human beings in equal measure until he gets his property back (or simply kills the used-up woman and finds himself another one to take her place). Ramrod’s the personification of a white-trash power trip, the lowest form of filth these dreadful alleyways have to offer.

So, it’s fitting that the first voice we hear in Vice Squad is Hauser’s, though not as Ramrod. With his casting, Sherman ignited two performative desires inside the wayward actor, as Hauser howls the movie’s hard-rock theme song, “Neon Slime”*** over an opening montage of perverts and policemen.

It’s a monster welcoming you to his domain, as the threat of violence Ramrod relishes hangs over the whole, a freak scene Leatherface who’d probably wear a woman’s mug just as easily as Bubba Sawyer ever could. For Hauser, it was the role of a lifetime that helped leave Greg Foster’s nice-guy carcass in the daytime TV ditch.

Nevertheless, this relentless king had to slaughter a den of doubtful wolves in order to sit atop his trashcan throne. According to Sherman, nobody at AVCO (including Rehme) believed that Hauser was right for Ramrod, to the point that the actor had to audition for an entire room at the studio. Under the instruction that he didn’t want Wings to “read,” but instead walk into the meeting “as Ramrod,” Hauser apparently entered and went inappropriately apeshit. Without raising his voice, this newly born thug scanned the suits and whispered, “I hear you motherfuckers think I can’t play this role,” before grabbing Rehme’s tie and yanking him across the table. Needless to say, the rest is history, and a sleaze icon was minted before a foot of film was even shot.

Unfortunately for Sherman, Vice Squad stands as the qualitative apex of filmmaking career. He’d graduate to weirder (the Rutger Hauer/Gene Simmons bounty hunter opus, Wanted: Dead or Alive (1986) and bigger (the disastrous Poltergeist III (1988) pictures, and there was a healthy amount of TV work tossed in for good measure. However, he never regained the same deranged spark of his first three titles — though the teenage “phone sex with a serial killer” weird-out, Lisa (1989), comes close — relegating Sherman to the somewhat nebulously defined status of “cult cinema auteur.”

As for Wings, Hauser continued to enjoy one of the damndest careers. He stepped into the shoes of hardboiled cops (Deadly Force, 1983), had a Vietnam POW script (Uncommon Valor, 1983) brought to life by the director of First Blood (1982), and even appeared in Norman Mailer’s enigmatic vanity project, Tough Guys Don’t Dance (1987).

After the ’80s, Hauser began working with Joseph Merhi and Rick Pepin’s video-store shelf-stuffing action factory, PM Entertainment. He was writing/directing/producing/scoring and starring (through a haze of booze and coke) in janky VHS scumbag classics as The Art of Dying (1991), where Wings plays a dogged detective hunting down a ring of Hollywood snuff film maniacs.

Eventually, Hauser left the big screen for recurring roles on sitcoms such as Roseanne and to play heavies in hour-long mysteries such as Murder, She Wrote. In 2010, Wings even resurrected his Young and the Restless run as Greg Foster, ostensibly again to make ends meet. So, while it’s always a joy to see him chewing scenery in wacko gems like Quentin Dupieux’s Rubber (2010), he’ll always be that guy who moved to Hollywood with a glimmer in his eye and a guitar in his hand, ready to sing for supper without an ounce of vanity to his name. It wasn’t until Vice Squad that Hauser became baptized in the river of the neon slime.

**The latter of which is based upon an actual murder case Jurgensen worked as an NYC detective.