Outlaw Cinema, and Beyond 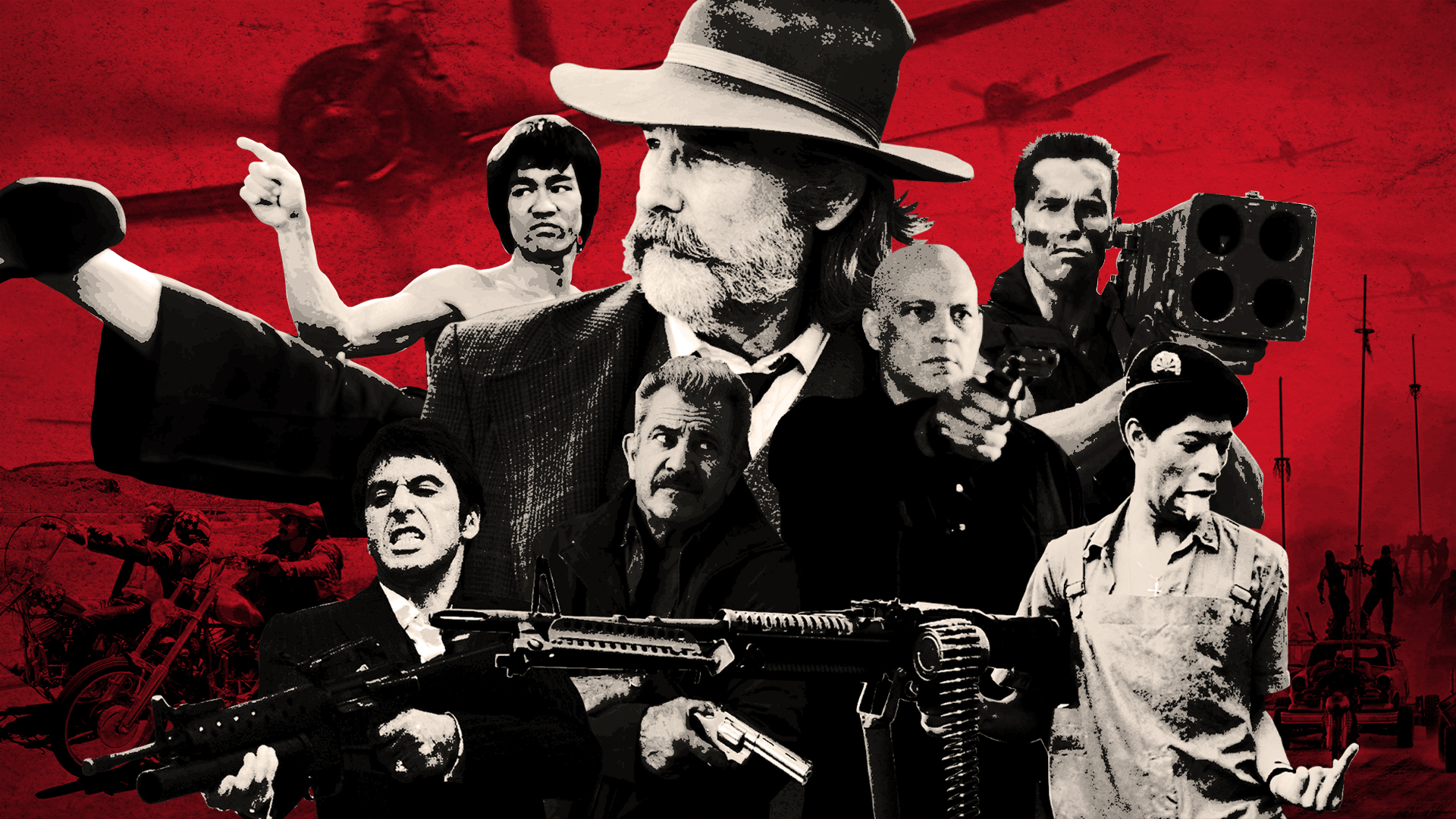 Outlaw Cinema, and Beyond

Pulitzer Prize-winning film critic and bestselling novelist Stephen Hunter didn’t learn the tricks of his trade in film school. His earliest influences were simpler: his schoolhouse, the big screen. Eschewing the prestige movie palace showing musicals and epics and admiring but avoiding the European-filled arthouse, Hunter preferred his local second-run, grindhouse-style joint: the Valencia. The movies he watched there were “the raw, the violent, the cheap, the sensational,” he recalls in the introduction to his collection, Now Playing at the Valencia. “Guns fired, blood splattered, mules talked, monsters mashed, pies flew, throats spurted, cities flattened, and planes crashed. Everyone said it was ridiculous. And, as is so often the case, everyone was wrong.”

Hunter might not have described it this way, but he was awash in Outlaw Cinema. Outlaw Cinema isn’t a genre, exactly, though some genres will feel more at home under the Outlaw Cinema umbrella. Thrillers, action flicks, mysteries, westerns, crime movies: anywhere you find outlaws you’ll likely find a movie amenable to the description of Outlaw Cinema.

When it comes to Outlaw Cinema, genres aren’t as important as the mindset that created it— and the person who sought it out. Outlaw Cinema is made by people working outside the system, a system that has grown stifling and conformist, dominated by a few huge brands putting out a limited number of blockbusters every year. The films that fall under the Outlaw label are those that are appreciated by people looking for something a bit different than what is currently offered at the multiplex. They are the movies that tackle subjects some execs consider too hot to handle, that some distributors won’t dirty their hands with. They’re the movies that don’t hit the requisite action beats exactly when Robert McKee or Syd Field say they must, the movies with scenes that linger and superfluous-seeming dialogue that is extraneous only if you consider things like mood and tone unimportant.

CINESTATE CEO Dallas Sonnier described his adoption of the phrase thusly to Electric Ghost Magazine: “During the ‘70s, there was a movement in country music where Willie Nelson, Waylon Jennings, Kris Kristofferson, Johnny Cash and Merle Haggard got together and created this outside culture, this counter-culture in country music, and they called it ‘outlaw country.’ So, our friend Jacob Knight, who lives in Austin, he called us ‘Outlaw Cinema.’ I think that’s an appropriate brand for the movies that we make — Outlaw Cinema. We are just following in the footsteps of Waylon and Willie.”

Outlaw Cinema is, at heart, a celebration of the individual creator’s power to conjure up a story that entrances and entertains without losing the individualist stamp burned into all great works. The ability of the artist to offer up a mirror to the world is his ultimate power, and that’s especially true for movies; as Otis Ferguson put it almost 80 years ago, “the movies … are today the nearest thing ever imagined to the unaffected and unconscious process of life, as expressed in art.” Yes, granted: Filmmaking is a team effort. Directors rely on writers, producers, actors, cinematographers, set dressers, etc. But without a singular vision guiding the process — an individual sitting down somewhere and making it all work, molding it into a form that makes sense — all you’ll end up with is focus-grouped, over-tested mush.

The ability of the individual to strive and flourish is at the core of the American ideal, and while cinema remains one of America’s great exports — a product that dominates around the world, breaking language barriers via computer-generated entertainments —something has been lost in the rush to make our movies palatable to every overseas audience. We may be the economic kings of the mountain, but we’ve abdicated cinema’s cultural throne.

Naturally, there are a few filmmakers who have earned the critical and commercial clout to do what they want, for the most part, at reasonable budgets: your Spielbergs, your Tarantinos, your Bigelows, your Camerons, your Finchers. Great directors, one and all. But these are outliers. Ours, unfortunately, is an age of cinematic universes, not auteurs.

REBELLER is the studio that’s going to change all that. If you’ve followed the outsider success of CINESTATE, then you’ve gotten a taste of what we plan to do going forward. S. Craig Zahler’s trio of modestly budgeted films — Bone Tomahawk, Brawl in Cell Block 99, and Dragged Across Concrete — have succeeded critically and found an audience despite the crowded streaming marketplace because he was given the freedom to make the pieces of art he wanted. Similarly, Henry Dunham’s The Standoff at Sparrow Creek earned plaudits on the festival circuit and the film, now streaming on Hulu, continues to find an audience with viewers looking for something more mature, something a bit different.

The visions of these filmmakers were bold and distinctive and, judging by the chatter that surrounded them, a little bit threatening: transgressive in the true sense of the word. A beacon of light offering safe harbor to those seeking a new counterculture. Given all that, it is perhaps unsurprising that traditionally minded distribution companies weren’t terribly interested in these movies. They don’t trust the audiences to show up for films that might discomfit them a bit.

Into that void steps REBELLER.

REBELLER will produce movies by these individualistic voices. REBELLER will be the champion of Outlaw Cinema, the home for those who have tired of Big Hollywood’s yoke and the demands of the major studios. REBELLER will bring to your theaters the movies that you crave but have been relegated to streaming services and Video On Demand.

Hunter described the films of his youth as “cheap”; I prefer the term “economically efficient," at least as applied to Outlaw Cinema. When I tell people that Bone Tomahawk cost less than $2 million, they are stunned: the past, brought to life in horrifyingly vivid detail, at a fraction the cost of an hour-long HBO prestige drama, a tenth the cost of a single episode of The Mandalorian. REBELLER’s DIY mentality and economic efficiency allow us to tell a different type of story. Comic-book blockbusters and franchise tentpoles dominate multiplexes because effects-driven razzle dazzle appeals across language barriers; such movies are expensive to make, and just as expensive to advertise. Our efficiency means we can target you, the American adult, rather than the Chinese teenager.

Our independence from the major studios and our, ahem, efficiency mean that we’ll never be at the mercy of others; we’ll never be beholden to their preferences and prejudices. But we have no interest in trading one set of priors for another. As Dallas told The Hollywood Reporter, with REBELLER’s forthcoming slate of features combined with CINESTATE’s previous pictures, “you'll start to see a brand emerge of unfiltered movies that are not didactic or pushing an agenda.”

RebellerMedia.com, meanwhile, will serve as a guide through the wilds of Outlaw Cinema. There’s an endless ocean of films out there, an almost crippling number of options and offerings that lead to analysis paralysis. Hopefully we can help narrow those options down a bit and suggest something new and exciting for you to watch.

Part of that process of discovery involves rediscovering the past, reconnecting with the predecessors of those filmmakers championed by REBELLER. We hope to introduce moviegoers to what preceded, to draw an intellectual line through the filmmakers we have known and loved for decades. History is a journey and we want people to come along for the ride. From the pre-code era to the post-war noirs to the excitement of New Hollywood to the direct-to-VHS moguls to the ’90s indie boom, there have always been cinematic rebels, people working on the margins and fringes and occasionally bursting through to mainstream attention. Between great streaming services such as the Criterion Channel and Kanopy and boutique Blu-ray houses such as Arrow and Shout, it’s easier than ever to embark on a cinematic exploration. We’re here to draw you a map.

Part of celebrating individualism is refusing to jump all over an individual when he steps ever-so-slightly out of line — or expecting art and artists to hew to your sensibilities in order to judge them honestly. There was a surprising moment in a recent New York Times article about Dave Chappelle’s Broadway shows in which the critic appraising the show seemed to come down hard on the legendary comedian’s “fiercely independent streak” and his refusal to “adjust to the room.” The jokes about difficult subjects seemed unwelcome because they don’t flatter the sensibility of the audience that paid hundreds to hear them.

One thing RebellerMedia.com is not here for: to gin up outrage. We’re not here to spur on Scarlett Johansson’s latest verbal-miscue/frightened walk-back cycle. We’re not here to mine Tumblr and Twitter for trending topics burning up the anger charts. We’re not interested in generating clicks by digging up interviews of long-dead icons in order to marvel at how much more enlightened we are today. And we’re not going to sit here and fulminate because a studio has gender-swapped a fanboy favorite; the difference between Thor and Lady Thor are minimal, at the end of the day, since both serve merely to perpetuate the blockbuster machine. Don’t worry: There are still plenty of other places for that kind of film writing, if that’s your bag. (Hey, we all have our kinks: no judgment.)

There’s a difference between writing critically and thoughtfully about a complicated subject and blindly shifting into Stalinist denunciation mode. The seeming disingenuousness of so many of these moral panics is, frankly, tiresome. And while we understand the purely economic reason for their existence — outrage and angst remain easy to turn into clickable content, each angry retweet and share generating pennies in ad revenue at the price of the author’s spirit — such stories are of little interest to us. Similarly, you won’t find us serving as cheerleaders for the mega-franchises dominating the multiplexes: those flicks don’t need anyone else flacking for them.

That said, snobbery has no home here either. As Dallas told the Wall Street Journal last year, a key element to the success of CINESTATE and REBELLER is what he calls “the Louisiana cousins test”: “If I text them the name of, let’s say, Timothée Chalamet, they don’t know who the hell he is. … They haven’t seen ‘Lady Bird,’ and they certainly haven’t seen ‘Call Me By Your Name.’ But if I text them Vince Vaughn, Kurt Russell, Don Johnson? They go f—ing crazy!” While others might snicker about Nicolas Cage and John Travolta having been relegated to the wilds of VOD in a seemingly endless stream of revenge thrillers and crime dramas, REBELLER is more likely to take their later oeuvre seriously. If anyone passes the Louisiana cousins test, it’s Poe from Con Air and Vincent Vega from Pulp Fiction —or Sean Archer and Castor Troy from Face/Off.

This isn’t to say that blind enthusiasm will rule the day either: critique is inherent to criticism, and critique can be quite cutting. But our job at RebellerMedia.com is to point you in the direction of what you should watch, not warn you away from morally dubious fare that might trouble your sensibilities because an actor or a director or a theme is “problematic.”

Quite the contrary: If art isn’t troubling you at least a little … well, what’s the point?