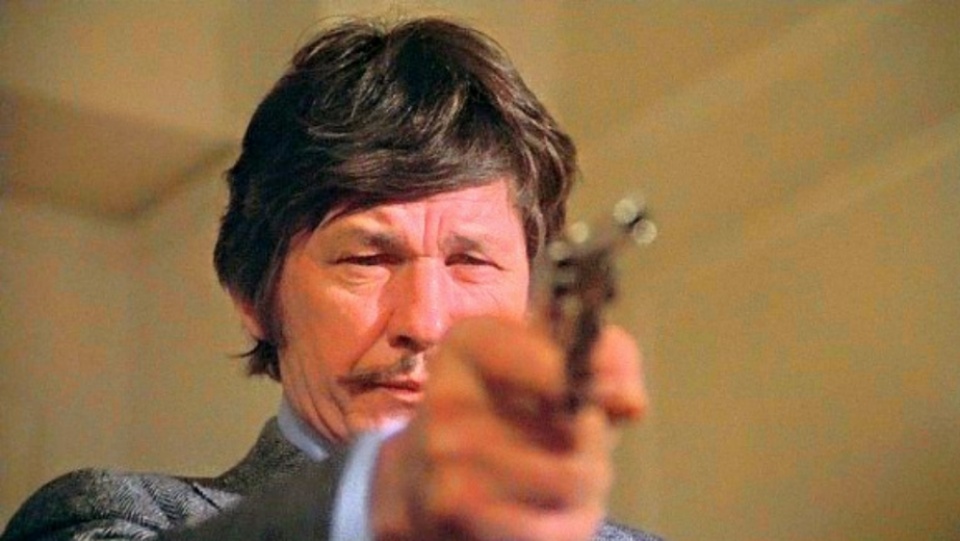 hat’s a line Charles Bronson’s bored mercenary drops in the early minutes of French heist flick Farewell, Friend that pretty much sums up the consummate tough guy’s career. We have come to think of Bronson as one of the finest action stars in cinema history, but the truth is he struggled to get work following his early television days. To most audiences throughout the ’50s and ’60s, Charles Buchinsky, eleventh son of a Pennsylvania coal miner, was just another craggy “that guy” character actor, making a living via guest spots on weekly episodic series like Treasury Men In Action, The FBI and superlative B-movies such as Machine-Gun Kelly (1958).

Sure, Ol’ Stoneface — who self-applied that sobriquet by commenting that his wrinkled visage looked like “a rock quarry someone dynamited” — might have had a few supporting hits under his belt in the form of The Magnificent Seven (1960) and The Dirty Dozen (1967). But he had to chameleonize into many forms on multiple continents before finding grand success as a bona fide leading man. There were multiple roles as a Native American (1954’s Drum Beat, 1956’s Jubal) and then a storied stint overseas for spaghetti maestro Sergio Leone, way before he picked up that pistol and become Cannon Films’ white knight avenger, Paul Kersey, in the extended Death Wish (1974) saga. Like many of his characters, Bronson was a hired gun, going where the work was and delivering his lines in that trademark terse manner for whoever would pay the next few months’ rent.

What’s gotten somewhat lost in the Legend of Bronson is how it’d take a team-up with French heartthrob Alain Delon for Chuck to truly break out. Delon was infatuated with the performer’s singular stoicism, handpicking him for Farewell, Friend. The movie made $6 million in France alone, as audiences went nuts for this unhandsome American hunk. So, it only made sense that Bronson remain in Europe and churn out a few more roles for the Frogs, resulting in a period that isn’t as widely discussed as his Italian Westerns or American crime cinema. Thankfully, Kino Lorber’s Studio Classics line recently released a trio of these titles on Blu, making it easier to go back in time and explore this pivotal period in a true titan’s filmography.

In this flighty heist riff, Bronson and Delon are former military men who find themselves locked in a swanky office building’s elaborate vault over the Christmas holiday and must survive without getting on each other’s nerves. If that logline doesn’t get you going, then you may be reading the wrong website, but Jean Herman’s stylish two-fister unspools like a sweaty, sexy Euro crime spin on Samuel Beckett’s timeless play, Waiting for Godot. Only instead of a pair of philosophical fools, we’re stuck in the middle with a Transatlantic tough-guy duo, desperately attempting to one-up each other to crack a safe that, for all they know, may be empty altogether. Unquestionably a minor movie, it’s still essential for anyone fascinated by the iconic performers, especially since Delon is coming off Jean-Pierre Melville’s immortal Le Samourai (1967), and Bronson is less than a year away from grinding the meanest harmonica imaginable in Leone’s Once Upon a Time In the West (1968).

Strangely enough, Bronson’s turn in Farewell, Friend is almost totally comedic, as he navigates the French underworld like a nefarious trickster, busting up rich perverts’ parties (in the movie’s most otherworldly scene) and generally becoming a nuisance to Delon’s impeccably mannered doctor-cum-thief. Though we don’t normally think of Ol’ Stoneface as a court jester, Herman puts the Western and war cinema vet’s spotless deadpan timing to great use, disarming whole scenes that, if played totally straight, would easily become boring. By the end, Bronson is spinning a harried L’inspecteur (Bernard Fresson) and his mod squad in interrogative circles, while simultaneously attempting to decode a pair of devious femme fatales (Brigitte Fossey and Olga Georges-Picot) who may have set he and Delon’s soldiers up as patsies from the jump. As far as fluffy noir farces go, you could do a whole lot worse.

Rider on the Rain (1970, dir. René Clément, with Sébastien Japrisot)

Bronson doesn’t show up until 30 minutes into Rider on the Rain, René Clément’s treatise on controlling men and sexual mania. That’s because Clément’s movie truly belongs to French great Marlène Jobert (Godard’s 1966 Masculin Féminin), whose mousy neglected housewife, Mélancolie, reacts to her brutal rape at the hands of a gaunt goon (Marc Mazza) by blowing the giant away with a double-barreled shotgun and tossing his body onto a desolate beach. Trouble is, now Bronson’s retired Army Colonel is snooping around, asking questions and causing jealous tension between the victim and her misogynistic airline navigator husband (Gabriele Tinti) for seemingly the hell of it. Of course, there’s a method to Col. Dobbs’ madness, but most of the fun to be had in Rider on the Rain (if we can indeed label anything contained in a film this genuinely unpleasant “fun”) is attempting to deduce just what the hell this meddlesome American has up his sleeve.

It makes sense that Bronson would make Rider on the Rain the same year he did Sergio Sollima’s undervalued Poliziottesco masterwork, Violent City (1970), as both illustrate the budding star’s attraction to ugly pulp. At its heart, Rider is a misanthropic fairytale, as Mélancolie’s assault leads her down a wacky rabbit hole filled with Parisian gangsters serving a vampy Queen of Hearts, and Bronson becomes the grinning Cheshire Cat who exploits her psychic trauma for his personal gain. What’s set up as a simple revenge plot becomes a Hitchcockian suspense piece, peppered with star-crossed romance, as the pursuer becomes infatuated with his prey. Tonally, it’s a mixed bag, yet that just renders Clément’s oddity even more beguiling. We may be a far cry from the director’s Delon-starring Patricia Highsmith adaptation, but Rider on the Rain owns a sinister sense of cheeky mystery (complete with a character named “Mac Guffin”) all its own.

A UK/France co-production — as the entirety of the action takes place inside a London estate — Someone Behind the Door is an outlier in Bronson’s oeuvre. Cast as an unwitting pawn in the diabolic scheme of a shifty head surgeon (Anthony Perkins at his smarmy, tweedy best), Bronson’s unnamed amnesiac spends most of Someone Behind the Door’s runtime befogged and being “re-programmed” into a patsy for the murder of the head shrinker’s wife (Chuck’s real-life flame, Jill Ireland). What ensues is a stagey thriller not too unlike Sidney Lumet’s Deathtrap (1982) adaptation (or any late Polanski picture), wherein we watch manipulation after manipulation, twist after twist, all in the name of arriving at a conclusion that you more than likely never saw coming.

A talky, cerebral B-Movie of the highest order, director Nicolas Gessner (The Little Girl Who Lives Down the Lane, 1976) makes the most out of the isolated location, as hall of fame French cinematographer Pierre Lhomme layers a thick coating of haze over everything, even when we’re indoors. It’s a neat way to replicate the cloud that’s undoubtedly shrouding Bronson’s character’s brain, as he begs and pleads for the doctor to truthfully fill him in on whatever the hell is going on around him. Despite the sturdy result, the hard man didn’t get along with Gessner, and ended up only making two more movies overseas — Red Sun (1972) and The Valachi Papers (1972), both with James Bond workman Terence Young — before heading back to the States and teaming up with his greatest collaborator, sadistic UK ex-pat Michael Winner. But those are tales for another time, when we can dive into just how legendary that partnership became, defining the bulk of Bronson’s brand recognition.

For more Stoneface Essentials, head on over to Kino Lorber’s online shop, where they’ve got a whole slew of titles for sale on beautiful Blu-ray, along with much more overlooked brilliance from years past.

Jacob Knight is a film writer based in Austin, Texas, whose work has appeared in several publications and who has spent more time watching action and exploitation movies than any human being probably should.