Print’s Dead, Zed: An Ode to Film Comment and Beyond 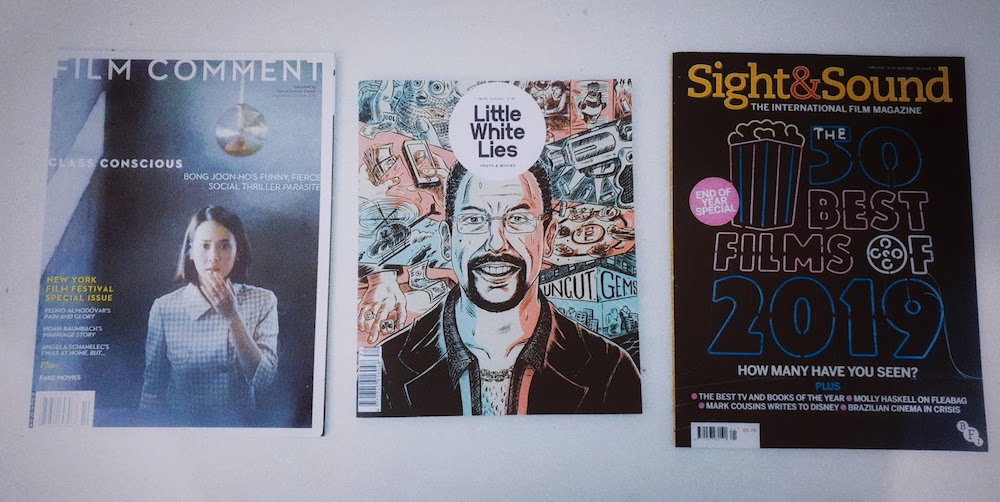 From the author's mag stash

Print’s Dead, Zed: An Ode to Film Comment and Beyond

hen the Australian government announced a lockdown of all businesses considered non-essential, I rushed to a nearby newsstand to see if there were any magazines I could buy before they closed. Two magazines — Little White Lies and Film Comment — were more sophisticated than most of those on the racks, so I picked them up. I read Little White Lies on the bus, which typically devotes half of its issue to its cover film (in this case, Terrence Malick’s A Hidden Life) with many accompanying illustrations before proceeding with general reviews and interviews.

They say “enjoy it while it lasts,” and I did: That last trip might end up being a cherished memory in a much different world emerging as we speak.

The Film Society of Lincoln Center in New York City announced in a Friday news dump that the bimonthly magazine Film Comment would go on an indefinite hiatus following its May/June edition. That final issue will be digitally distributed and will be followed by layoffs and furloughs of its staffers and writers. It’s not the only storied movie mag whose outlook seems bleak. Weeks before the pandemic hit, the staff of the French magazine Cahiers Du Cinema walked off the job, believing their new owners would interfere with their content, reducing a journal of serious criticism to a lifestyle magazine.

Film periodicals have a substantial influence on the culture of movies and the way we talk about the medium. Throughout its history, Film Comment allowed writers to take music videos seriously as a cinematic form and assessed the influence of technological advances like VHS. They have highlighted LGBT representation and debated every major critical controversy from the auteur theory to the use of canons to the Thumbs Up/Thumbs Down approach popularized by Siskel and Ebert and quantified in a mass way by Rotten Tomatoes. Cahiers was a launching pad for Francois Truffaut and Jean Luc Godard, who would then go on to bring the French New Wave. Without the magazine, there wouldn’t be The 400 Blows. Without the French New Wave, there wouldn’t be New Hollywood.

Not only does the Film Society put on the New York Film Festival, one of the biggest and most important in the world, but via its magazine, it introduced us to directors who went on to be influential voices in the cinematic landscape. The list is endless, but it includes Martin Scorsese, Richard Linklater, Christopher Nolan and Darren Aronofsky. Meanwhile, Cahiers was an eclectic bunch, primarily focused on film theory and the future of cinema. It is also unpredictable. As I noted in an essay about Joker being more appreciated by critics in Europe, it placed the film in its list of best movies of 2019 over The Irishman, hailing it as an offset to the homogeneous aesthetic of Disney/Marvel. All this makes for striking yet serious content that film nerds would crave.

Such objects — physical products that command your attention and gather information in one concrete space, immortalizing them in some weirdly permanent way — have served as a point of entry for generations of film fans. When I started watching movies regularly, I would buy issues of Empire Magazine. In each edition, they have a range of content, from reviews, interviews, behind-the-scenes looks of upcoming blockbusters, and as a bonus, posters that you hang on your bedroom wall. Then there are the special editions listing the best movies of all time, which serve as a guide to understanding the medium. Getting a sense of each mag’s point of view was key to understanding the diversity of the cinematic experience. Empire would rank Citizen Kane, The Empire Strikes Back, The Dark Knight and The Godfather very highly, while Sight and Sound, the magazine from the British Film Institute, put Vertigo ahead of Citizen Kane in its most recent decennial poll, sparking conversation around the globe. After all, it shows that film commentary is by its nature subjective, ever shifting.

I am a Luddite who owns many magazines — not just on film, but politics, business and even porn — so take what I say next with a grain of salt if you must. But there is one substantial benefit to print: It is a great indicator of careful curation, selecting the best articles and essays to represent an issue. You won’t have to worry about algorithms shoving headlines down your throat like “Here’s What Jon Hamm Has to Say About the Stimulus Package” or “The Unbearable Neoliberalism of Crazy Rich Asians.” It makes sure that your reading is less noisy and more intimate. As Andrew Ferguson noted in The Atlantic in an essay on the joys of print newspapers, “it is a special world, an invented world, and here is the key to its charm: It is pleasingly static, momentarily a settled matter.”

Journalism around the world is being hit by economic problems, and film journalism is no exception. Naysayers are, obviously, free to sneer at the closure of such publications. The majority of readers are now online; there’s something to be said for instant access; and the almighty algorithm helps find and cater to niche audiences even as hyper-woke virality decimated newsroom after newsroom of VC-backed, millennial-run websites. And magazines aren’t that easy to run: They’re collaborative efforts filled with editors, writers and designers, who need to find innovative ways to maintain themselves from the downpouring tide. You need advertisers to pay the bills, as sales alone barely pay for the paper and ink, to say nothing of the writers.

The general norm for print and media writ large is that survival requires a loyal audience, mainly from subscribers. As I don’t subscribe to a lot of outlets, visiting a newsstand and purchasing an issue was how I showed support. One hopes that if movie theaters can survive our current crisis — a big if, potentially — then publications, too, can emerge on the other side of this thing, despite having even bigger obstacles in their way. These institutions may show their age and may feel like anachronisms in the digital age, but they are foundational to our culture. The best way to approach this is not with a sense of doom, but through shared purpose of discovering new ways to keep these publications sustainable and relevant.

And it will mean moving beyond the demand that content wants to be free.