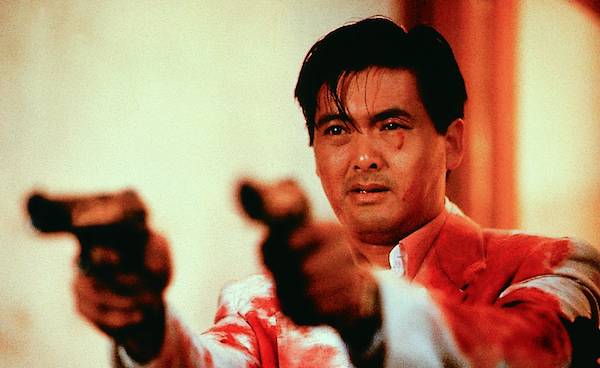 erisimilitude in action movies is overrated. No matter how far Dominic Toretto and John Wick take things in the other direction, it still seems like most filmmakers in the genre are more interested in making their movies grounded than making them awesome. They did their research and got the up-to-date special ops gear and lingo. They avoid flying kicks and flips because it’s more realistic to do a quick Krav Maga move with the camera up-close and wobbly.

I believe all that reality shit is an unnecessary shackle on the artform. The poetic, the absurd, and the exaggerated are often more beautiful, more entertaining, and a better way to get to the truth. And no director is a better example of that than John Woo, who told the DGA in 2013, “I’m crazy, I don’t care about logic. Logic can be very boring. When I’m shooting, I do what I feel.”

So if you want to see some of the very best and most heartfelt action movies ever made, you need to let go of literalism and knee-jerk cynicism and step into what I call The Woo Zone.

You know the trademarks. Holding two guns. Slow motion. Doves fluttering by. These were some of the visual signatures of Woo’s classic streak of Hong Kong action movies from 1986-1992. His characters, in many cases played by the impossibly cool Chow Fun Fat, are dressed suavely in suits, dusters, and sunglasses. Dangling often from their lips is a cigarette, a match, a toothpick. They find guns hidden in potted plants, birdcages, library books, mortuary cabinets. They swing on a chain, slide across the floor or down a banister, or roll on a cart, and fire their infinite supply of ammunition, punching through bodies, structures, and symbols of innocence, filling the air with smoke, blood, splinters, glass, and sparks. Woo’s choreographed violence has often been compared to ballet — fitting for a former ballroom dance instructor who references West Side Story and The Wizard of Oz as often as he does Sam Peckinpah.

After a decade and a half helming low-profile martial arts and comedy films, Woo’s gangster melodrama A Better Tomorrow (1986) smashed box-office records and largely defined the genre known as “heroic bloodshed.” It centers on estranged brothers (Leslie Cheung and Ti Lung), one a cop and one a fallen criminal trying to go straight. Chow’s breakout role as doomed partner-in-crime Mark was so popular they brought him back as a twin brother in the deliriously over-the-top 1987 sequel.

Then The Killer (1989) earned Woo and Chow god status in the West. Chow plays suave assassin-for-hire Ah Jong, who accidentally blinds a club singer (Sally Yeh) during a shooting. Without revealing his guilt, he becomes her friend and protector and takes one last job to finance her eye surgery. He’s pursued by Inspector Li (Danny Lee), who caused the accidental death of a hostage. When the film alternates between Li tracing Ah Jong’s steps and Ah Jong shooting somebody in the same place, it’s a perfect crystallization of Woo’s favorite theme of parallels between antagonists.

Woo chooses weapons for the elegance of their design and gives each a distinct sound, but he doesn’t worship them; in fact, literally the opposite. In The Killer (and later 1997's Face/Off), the director — who was raised Lutheran, helped off the streets and into school by Christian missionaries, and even considered becoming a minister — depicts the ultimate profanity of gun violence by staging it in a church. Its fruitlessness manifests in another common Woo trope, the Mexican standoff. He says he’s never fired a real gun, though he once admitted to owning a fake one: “The prop guy made one for me with wood.” He also told the Chicago Tribune, “I never wanted to own a gun; I have no desire or curiosity.”

That’s easy to believe once you’ve seen Bullet in the Head (1990). It starts as nostalgia: three young friends in the 1960s dancing, falling in love, getting into rumbles. But when they accidentally kill a guy (after a wedding!), they flee to Vietnam to become smugglers and find that life in a war zone makes the turmoil back home seem like nothing. Deciding that, “As long as we have guns, the world is ours,” they befriend a man armed with dynamite cigars (Simon Yam), steal a crate of gold, rescue a famous singer (Yolinda Yam) from gangsters, and shoot a ridiculous number of people.

Then things go south. They almost drown protecting the gold and get captured by the Viet Cong. The titular bullet and head belong to Frank (Jacky Cheung), and it’s an injury that sends him home a pathetic junkie who ends up working as a contract killer. His violence made for glorious action movie entertainment, but it messed up his brain and he carries it with him wherever he goes.

That’s Woo’s angriest and most personal movie, but the ultimate unadulterated megablast into the Woo Zone is Hard Boiled (1992). Chow plays police inspector/jazz clarinetist Tequila, Woo’s idea of a Hong Kong Dirty Harry, or a “hot handed god of cops” according to one translation of the title. Without entirely abandoning the poetry or melodrama of his earlier films, Woo sends his already outlandish mayhem into overdrive for an astonishing knock-you-on-your-ass action juggernaut that one-ups (or maybe more like five-or-six-ups) the spectacle of the Joel-Silver-produced American classics it followed in the footsteps of.

But how ya gonna keep ‘em down on the farm after they’ve seen Chow Yun Fat running around with a gun in one hand and a baby in the other? After emigrating to the United States, Woo — who’d had a luxurious 40 days to film Hard Boiled’s climactic 30-minute hospital shootout — found himself dealing with shorter schedules, MPAA censorship, and pissant studio meddlers re-editing his Hollywood debut Hard Target (1993). At the time I was hung up on its inferiority to his overseas films, but in retrospect it’s a miraculous bridging of cultures, combining important western traditions like the Most Dangerous Game ripoff and the Jean-Claude Van Damme vehicle with Woo’s intoxicating style and unhinged ideas, such as Van Damme standing on a motorcycle playing chicken with a truck that he then rolls over and causes to explode. It has a great villain played by Lance Henriksen, Wilford Brimley firing arrows, and the universal appeal of a broke-ass dockworker hero fighting ultra-rich psychos on behalf of homeless veterans.

In a similar vein, I love Woo’s berserk made-for-cable Dolph Lundgren vehicle Blackjack (1998). Dolph at his most charismatic plays a bodyguard who, after being temporarily blinded by an explosion, fears the color white (just go with it). I’ve also come to appreciate Mission: Impossible II (2000) for adding Woo idiosyncrasies (Slow-motion walking next to doves! Mid-air chest bump! Emotionally vulnerable villain!) to a mainstream Tom Cruise franchise. But Woo’s most potent American movie is definitely Face/Off, a strange brew of explosive action, heavy emotion, and shameless absurdity. Though Woo had never used a sci-fi hook before, how could he resist one where a cop and a killer live each other’s lives?

After a decade in the States, Woo returned to Asian cinema for what might be the most ambitious film of his career. In the two-part fantastical period war saga Red Cliff (2008 and 2009), he was able to revisit the period martial arts territory of his early films, now armed with an enormous budget, state-of-the-art technology, and a veteran’s mastery of filmmaking craft. I tried to take it slow because I was intimidated by the complex ensemble of characters and factions, but at the end of Part I’s 146-minutes, I was too captivated not to go straight into Part II.

But the maestro hasn’t left the guns behind. Woo’s most recent film, the Japanese-cinema-tribute Manhunt (2017), is an enjoyable throwback laced with a little of the sci-fi silliness of his American period (there is some super strength involved). It’s a chase movie about a framed corporate lawyer (Zhang Hanyu) and a detective (Masaharu Fukuyama), and it fills me with joy to say that there’s a fight in which the interference of doves saves both of their lives and they later end up handcuffed together fighting off assassins in perfect synchronicity. Why? How does any of this work? ’Cause they’re in the Woo Zone. You should join them there.