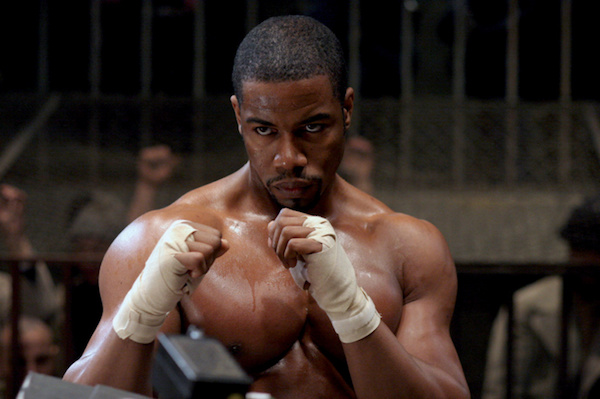 ith his deep voice, muscular physique and lifetime of training in eight martial arts styles, it would be easy for Michael Jai White to get stuck in certain types of roles: gangsters, henchmen, soldiers, cops. And he’s done those. Some REBELLER readers may only know him for getting a knife in the mouth from the Joker in The Dark Knight or for playing the partner-in-crime to Henry (Tory Kittles) in Dragged Across Concrete. That character is named “Biscuit” and about all we know about him is that he liked dinosaurs as a kid; I think we learn more about the bank teller who gets killed and arguably the egg salad sandwich that Anthony (Vince Vaughn) eats. Yet White gives a memorably searing performance, particularly as he drives the escape van following a bank job and seethes about how the villains of the picture are treating the hostages in the back.

He can bring unexpected depth to characters like that, but he’s not opposed to goofing around. He’s shown an aptitude for comedy in Tyler Perry’s Why Did I Get Married movies (2007 and 2010); the Elmore Leonard adaptation Freaky Deaky (2012); and most notably the great 2009 blaxploitation parody/homage Black Dynamite, which he also conceived and co-wrote. Black Dynamite weaponizes White’s over-sized swagger mostly for laughs; unlike, say, Undercover Brother or Austin Powers, the joke is that he actually is as amazing as he thinks he is. But he has some genuine Jim Kelly-style fight scenes and “oh shit” moments like walking over to flip the sign on the door to “Closed” before taking on everyone inside the pool hall. As much as I like all these films and admire those facets of his talent, it’s Michael Jai White the star of traditional action movies that most appeals to me, and that’s what we’re going to talk about today.

In the old days, there were action stars. Athletes, martial artists and bodybuilders who turned themselves into icons, brand names, personal guarantees of a certain type of entertainment based around their dispositions and physical abilities. Stallone and Schwarzenegger turned their bodies, faces and personas into some of America’s greatest exports. For a time, Chuck Norris, Jean-Claude Van Damme and Steven Seagal built on the traditions of Asian martial arts films, sometimes merged with cop movies or sci-fi, rising from B-movies and programmers to wide-release studio offerings (and back). Others, such as Don “The Dragon” Wilson and Cynthia Rothrock, helped lower-budget versions of such films proliferate on home video, their names and faces making more of an impression than any of the individual titles.

White was still coming up in those days. He’d held dozens of karate titles and had bit parts in Van Damme’s Universal Soldier, Jerry Trimble’s Full Contact, and Wilson’s Ring of Fire 3 (plus The Toxic Avenger II and III and Teenage Mutant Ninja Turtles II) when he was chosen from over a thousand hopefuls in an open casting call to star as Mike Tyson in a 1995 HBO biopic. He excelled in that role: “Michael Jai White almost makes Tyson likable,” wrote Steve Nidetz in the Chicago Tribune.

White found his first marquee role as Spawn (1997), a fitting (if cheesy) use of his larger-than-life, straight-out-of-a-comic-book qualities, but one that mostly kept him hidden behind thick latex necroplasm. He played villains opposite Van Damme (Universal Soldier: The Return) and Seagal (Exit Wounds) as their careers in theatrically released films were winding down. But he didn’t achieve the type of widespread recognition that leads to a series of action vehicles — of Michael Jai White movies.

That is, not until 2006, through the unlikely means of a direct-to-video sequel to a lesser-known prison boxing film. In Undisputed II: Last Man Standing White replaces Ving Rhames as the villain from the 2002 Walter Hill original. Still an asshole, but now the protagonist, he’s framed in Russia and forced to fight  champion Uri Boyka (a breakout role for Scott Adkins, who became the protagonist for two excellent sequels). Coming from one of DTV action’s best directors, Isaac Florentine, and with choreography by J.J. Perry (Warrior, Haywire), it expertly employs all the most satisfying prison and fight tournament tropes in the service of hard-hitting, acrobatic fights that put all the quick-cut, shaky-cam theatrical bullshit of the era to shame.

In this low-budget, small-screen, meat-and-potatoes genre work, White is really allowed to shine. In 2011, he made a sequel to another obscure theatrical release with his directorial debut, Never Back Down 2: The Beatdown. He’s also in front of the camera, stealing this silly teen movie take on underground fighting tournaments as Case Walker, a disgraced MMA star and ex-con turned reluctant fight trainer. When the protagonists first approach his trailer, he calls them bitches and chases them away. But he agrees to teach them in exchange for “blood, sweat, and money,” plus a 20-pound sack of potatoes.

There’s a scene where police plant a gun on him and try to beat him with clubs, and instead he kicks the shit out of them while still handcuffed. It’s a cathartic fantasy for an age of frequent police brutality, filmed a few years before the deaths of Trayvon Martin, Michael Brown, and the rise of #BlackLivesMatter. Try dragging Case Walker across concrete — I dare you. White returned as director and graduated to main character in 2016’s Never Back Down: No Surrender.

Falcon Rising (2014) failed to kick-start a planned franchise, but it’s a solid depressed-ex-Marine-goes-vigilante-in-Rio movie where he gets to fight a Yakuza swordsman using pipes as tonfa. The Hard Way (2019) has clunkier filmmaking and a more ridiculous story, but ‑ just like in the old days ‑ it gets by purely on the tough-guy charisma, humor, and fighting skills of its star. White plays an ex-Special Forces jazz club owner and chess enthusiast investigating the death of his guitarist/cop brother. In one scene, he rips a guy’s ear off in the VIP room at a strip club and then yells at him for not taking it with him when he leaves. He’s so overpowering that he tries to convince his nephew he’s not a fighter because, “Fighting is the violent exchange of physical blows. It’s technically not a fight if I’m the only one giving blows.”

Any of these are good viewing for straight-ahead action fans, as are some of White’s supporting-player gigs. It’s cool to see him fight Tony Jaa in Dolph Lundgren’s Skin Trade (2014) and reunite with Adkins in both Accident Man (2018) and Triple Threat (2019). But for my money, the quintessential Michael Jai White film is Blood and Bone (2009), directed by Ben Ramsey. White plays a fresh-from-prison mystery man who joins an L.A. street-fighting circuit in what turns out to be a revenge mission. The high-flying, bone-crunching fights choreographed by Larnell Stovall (Universal Soldier: Day of Reckoning) are shot with energy and style. The character is peak MJW, running through enemies like a battering ram, though he could probably incapacitate them with a dirty look.

It also has a great sadistic gangster villain (Eamonn Walker) who loves Genghis Khan quotes and samurai swords. In one of many memorable scenes, he starts a Wang Chung sing-a-long just to catch a guy off guard when he stabs him. Odder still, there’s a brief cameo by martial arts legend Bob Wall as his character, O’Hara, from Enter the Dragon. And I’m okay with these two movies taking place in the same universe. Blood and Bone is a stone-cold action classic, one of the purest of its era.

That was 10 years ago. Though White’s work has continued to be steady, it has rarely been shown in theaters and has never been much higher profile than playing Bronze Tiger on Arrow. Here’s hoping some of his future movies - perhaps through his production company Jaigantic Studios, currently in production on a Black Dynamite-style western called The Outlaw Johnny Black — will be able to properly showcase the unadulterated power of MJW.