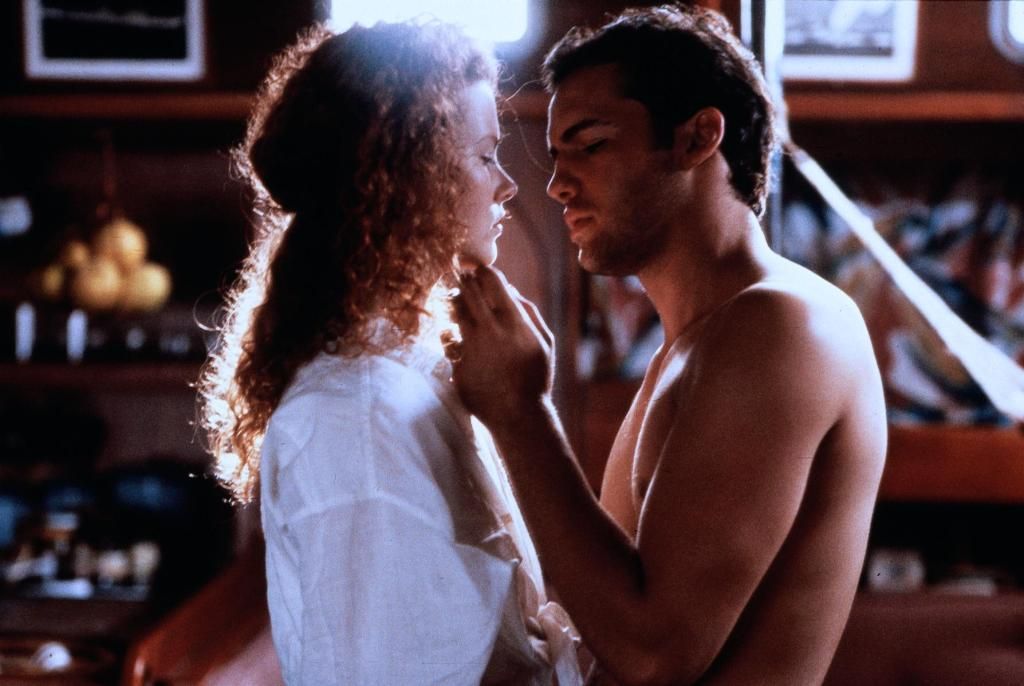 Not very calm at all, actually. (Photos: MovieStillsDB.com

f your enemies don’t kill you, nature will. And remember: Nature is your enemy.

If you were going to try and come up with a generic tagline that could be applied to just about any Ozsploitation movie, that would be a good start. While survivalism has long been a component in many an action and adventure film, no other country’s cinema is quite so hung up on the idea that mother nature isn’t so much a benign force not to be toyed with as it is an actively malign presence that will wreck your shit and kill you, your friends, your family, and definitely your pets. It’s telling that, in Australian parlance, any place outside of an urban center is colloquially called “the bush”; and it’s doubly telling that there’s a special term to describe the vast, inhospitable inner section of the continent that’s home to a diverse array of indigenous peoples and animals so singularly Australian that even the country’s national tourism bureau has declared “nothing says Australia quite like our Outback.” Covering roughly 70 percent of the continent, the Outback — designated one of the largest remaining intact natural areas left on the planet — is vast, beautiful, and deadly, the home to a diverse array of indigenous peoples and fascinating wildlife that serve as constant reminders of the country’s vibrant history and the simultaneous importance, and danger, of the natural world.

Which is all a very long-winded way of saying that if you had a massive swath of land occupying your backyard filled with all manner of natural threats, you’d probably be pretty damn fascinated with it, too. Which is what makes the inaugural entry in REBELLER’s Return to Oz(sploitation) series so unique, and why I’ve chosen to focus on it as opposed to so many more conventional and quintessential works of Australian cinema: In Dead Calm, the natural world is every bit as much of a threat as any landlocked piece of cinema; the difference here is that, instead of the Outback, that threat comes in the form of the Indian Ocean.

Based on its setup, you could be forgiven for thinking that Dead Calm is another early-2000s direct-to-video horror quickie. Following the death of their son in a car accident, Australian Royal Navy captain John Ingram and his wife, Rae, decide to take a sailing trip along the Great Barrier Reef to heal their emotional wounds and repair their increasingly rocky marriage. From the outset, it’s clear that there are more issues at play than just the dead kid: John’s being away at sea for long stretches of time hasn’t been conducive to a happy relationship, and while it’s never directly addressed, the vast age difference between the couple — he’s somewhere in his mid-to-late 40s while she’s a 20-something — is clearly a point of contention in their marriage. Not helping matters are Rae’s combined PTSD and survivor’s guilt from the accident — she was the one driving, and the wreck was nominally her fault, as she became distracted after their son managed to unfasten his seatbelt — which together have resulted in a reliance on anxiety medication that’s beginning to border on addiction. Nonetheless, the couple’s time at sea seems to be improving matters slightly. At least until the castaway shows up.

Hughie Warriner, whom the Ingrams pull from a dinghy, seems at first glimpse to be genuinely distressed: He’s borderline incoherent, panicking, and when he calms down enough to talk straight, delivers a completely plausible story about having survived a food-poisoning epidemic that left him the only living soul on board a boat full of corpses. While the couple initially take sympathy on Hughie and offer to return him to land, once he’s passed out, John — seasoned naval man that he is — can’t help but shake the feeling that there’s something wrong with Hughie’s story. Figuring the younger man will be spending at least the next several hours unconscious, he decides to backtrack and board Hughie’s boat to check things out for himself. It’s a bad move: It doesn’t take John long to discover that, while Hughie’s crew is, in fact, dead, they look more like the victims of a Friday the 13th movie than any food poisoning he’s ever seen. It quickly becomes apparent that Hughie succumbed to an aquatic form of cabin fever and massacred the rest of his companions in a psychotic rage. Before John can make it back, Hughie has regained consciousness, and absconded with both Rae and his ship.

One of Dead Calm’s greatest strengths is its origin as a solid thriller written by Charles Williams, a former member of the merchant marine who had an equal grasp on the human psyche and the wonders and terrors of life on the high seas. (Indeed, long before director Philip Noyce got his hands on the rights, Dead Calm was originally optioned by Orson Welles, whose abortive effort to film it as The Deep warrants an article in its own right.) “He is quite fond of boats,” a tongue-in-cheek line included in official author bios of Williams issued in the 1960s, downplayed Williams’ seemingly encyclopedic knowledge of the workings of a variety of seafaring vessels; he brought to his novels a meditative, almost religious devotion to the sea and all that dwelled in and travelled on it.

While much of the source material has been altered — in the novel, John and Rae are newlyweds; John discovers survivors on board the sinking vessel who aid him in his quest; and Hughie is more man-child than malevolent — the script retains Williams’ understanding of the ocean as something to perhaps be tamed but never conquered. In terms of visceral thrills, the portions of the film dealing with John’s struggles provide the most satisfying moments. His experience means we know he has the knowledge to escape this situation, so it’s genuinely thrilling to watch as he makes repairs, improvises solutions, and survives a number of subaquatic catastrophes. That Sam Neil is in fine form here only enhances the inherent danger and excitement of the scenario: He’s thoroughly convincing as a man both utterly capable of surviving this and utterly terrified he won’t. Many actors would’ve played him as a one-dimensional tough-guy unphased by the prospect of his own demise, but Neil brings a real humanity to the character, concerned both for his own mortality and his wife’s welfare.

As thrilling as the sequences with Neil are, though, it’s those centered on Kidman and Zane that make Dead Calm shine, that elevate it from a pulp survival thriller to something truly special. While the dynamics have shifted from the novel, screenwriter Terry Hayes has wisely chosen to frame the Rae/Hughie sequences as a battle of psychological wills, and it’s utterly fascinating to watch the verbal sparring and mind games the pair play with one another to dominate the situation. The role of Hughie could’ve been cast with any physically imposing actor, but Zane brings something unique to the role. He vacillates between the persona of charismatic drifter and foaming-at-the-mouth psychopath with an ease that’s convincing, one that drives home the point that this is a man bound by nothing but the laws of his own deranged mind. Zane plays Hughie with a very real, subtle sort of insanity one might find in a mental ward, and it’s a shame he never got to expand those horizons in more compelling roles. Meanwhile, it’s in Dead Calm that Kidman first came into her own as an actress and began to demonstrate the chops that would lead to her one day being regarded as one of the finest performers of her generation. With a single expression, she’s able to convey all the frustration, guilt, regret, confusion, and determination in Rae’s mind, and the sheer force of will she demonstrates in her endgame against Hughie shows her to be every bit as dangerous as either of her male counterparts.

Meanwhile, there’s another factor at play in the casting that enhances the “ick” factor of the movie, and raises it above the level of a routine thriller. That Zane and Kidman are roughly the same age and fantastically good-looking lends a white-hot sexual undercurrent to the pair’s interactions, and throws a complicated psychological wrench into the proceedings. While Rae never seems unhappy with John, sexually or otherwise, there’s also a palpable chemistry between her and Hughie the moment he arrives. He’s the manifestation of the very sea that John is fighting against: beautiful, savage, and unpredictable. While “beautiful sailor rescues handsome castaway” has a certain men’s adventure vibe to it, the fact that Hughie is a completely unhinged psycho with the blood of a dozen people on his hands lends a dissonance to the film that’s deeply unsettling. Many movies go out of their way to avoid making their audiences sexually uncomfortable; Dead Calm actively seeks to achieve that effect, essentially asking its audience, “If a sexually attractive psycho left your significant other for dead, would you still find them sexually attractive?” It’s a question that’s followed through in what’s probably the film’s most iconic — and disturbing — sequence, when Rae attempts to use Hughie’s attraction to her for her own gain.

As a study in the unique brand of survival horror present in Ozsploitation, you could write an entire master’s thesis on Dead Calm. The oceanic photography is truly stunning, and the climax is gripping, made all the more thrilling by the knowledge that Kidman is actually controlling her vessel during some pivotal scenes (already a Method actress, she demanded she be taught how to operate it before filming). Originally ending on an ambiguous note a little more in line with the source material’s anticlimax, the studio forced the filming of an extended ending that provided more catharsis to the audience; but, in a rare instance of studio meddling actually improving a film, the movie’s tacked-on segue back into Friday the 13th territory resulted in one of Ozsploitation’s most iconic kills. Not to spoil anything, but, when one of the Ingrams decides they’re going to fuck you up, you remain very thoroughly fucked.

Ultimately, it’s a film that needs to be seen for any student of the Ozsploitation genre or exploitation fans in general in want of a higher caliber production than they’re used to from 42nd Street fare.

Preston Fassel is an award winning author and journalist whose work has appeared in FANGORIA, Screem Magazine, Rue Morgue, and on  Cinedump.com; his first novel, Our Lady of the Inferno, won the 2019 IPPY Gold Medal for horror.