Return to Ozsploitation: ‘The Year My Voice Broke’ 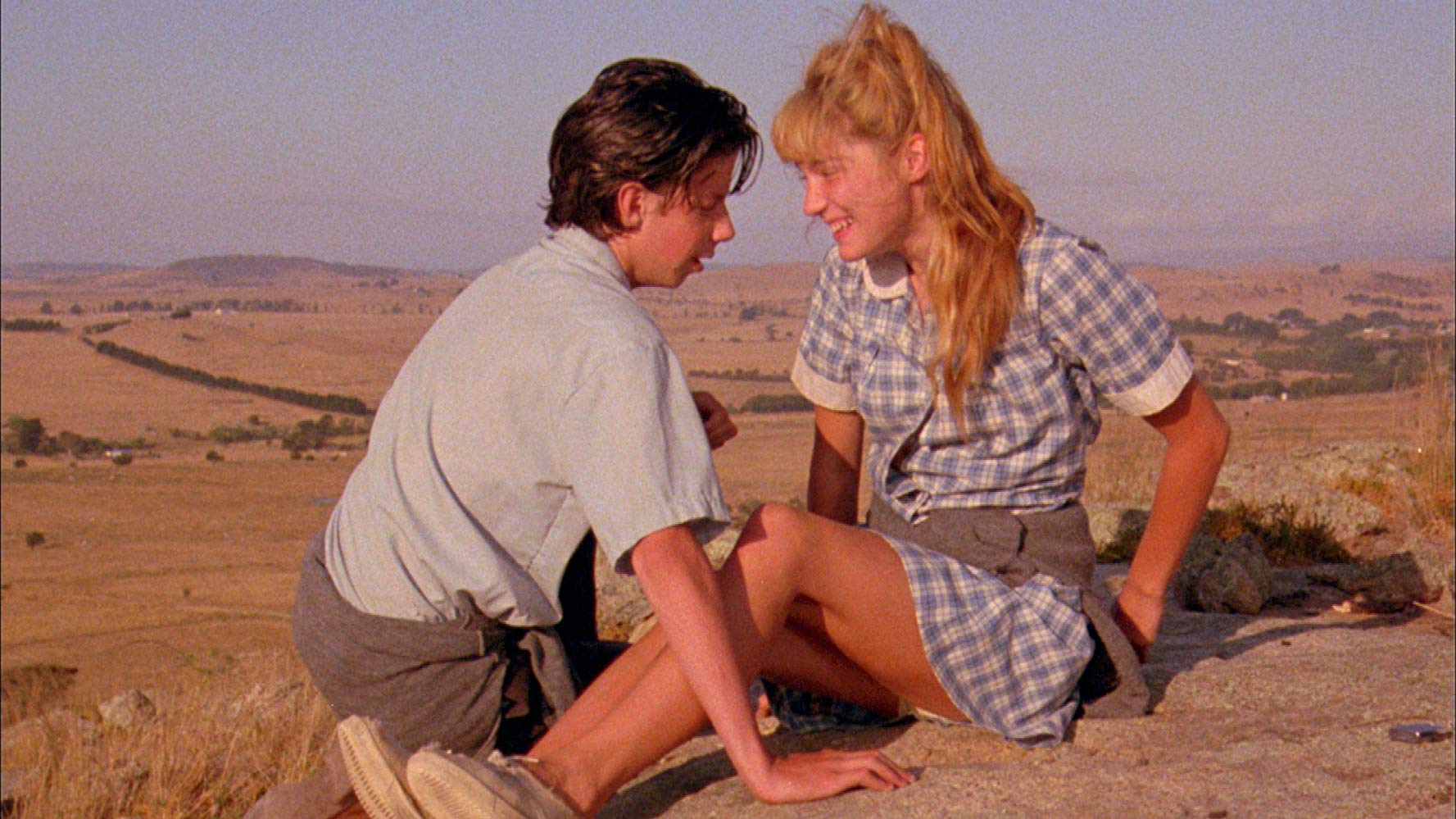 Return to Ozsploitation: ‘The Year My Voice Broke’

Soaked as they are in doo-wop music, classic cars, leather jackets, and all other manner of Americana, it’s easy to think of the nostalgic coming-of-age film as a uniquely Hollywood creation. Perhaps no other period in U.S. history so perfectly captured the essence of the American Dream as the post-war era, when the country could safely take credit for having saved the world from a genocidal madman bent on global domination. It’s telling that, even into the 1980s, films like Back to the Future, Stand by Me, and Stealing Home were still offering up a Stranger Things-style nostalgia trip, giving us a to an era before the Kennedy assassination, Vietnam, and Watergate forever altered our self-image as a singularly utopian society.

That’s what makes this month’s entry such an interesting cinematic and historical artifact. The Year My Voice Broke (1987) is a glimpse into how Australia perceived itself following the Big One. It’s fascinating how similar it is to our perspective — and yet, how startlingly different it is at the same time. It also provides the answer to a very strange question: What would you get if you fused a nostalgic coming-of-age tale with a rural exploitation drama?

It’s the 1960s in New South Wales, Australia, and teenager Danny Embling (Noah Taylor) is about to find out just how badly life can suck. Long picked on and ostracized for his gangly frame and sensitive nature, he’s always been able to take solace in his friendship with the free-spirited and headstrong Freya (Loene Carmen), whom he’s known all his life. In fact, despite the bullying he’s endured at school and around his rural town, he and Freya’s existence could be fairly called Edenic, characterized by days spent running around the Bush, playing pinball at the local pub, and generally shucking off the cares of the world. All good things end, though, and, as a particularly idyllic Aussie Summer dwindles to a close, Danny begins to notice that while he’s as gangly as ever, Freya … well, isn’t. Come the first day of school, Danny’s back to having his head shoved in the toilet, but Freya’s getting a completely different sort of attention — and finding that she’s got less time for Danny.

That time is, instead, going to Trevor (Ben Mendelsohn), Danny’s opposite in virtually every way: Big, loud, dumb, and violent, he’s also the swaggering bad boy, a petty crook who is just as likely to attend classes as he is to raise hell in town. It would be easy for Danny to hate him, but this is a more complicated movie. See, thing is, Trevor shares one thing in common with Danny: In spite of his rougher tendencies, he’s genuinely sweet, and he comes to care about Freya every bit as much as Danny does. Compounding matters is that Trevor turns out to be Danny’s knight in black sweaty leather, protecting him from the school bullies and affording him a level of protection and prestige-by-association he’s never experienced before. As the school year wears on and Freya and Trevor’s relationship intensifies, Danny finds himself torn between love, lust, friendship, and loyalty. When Trevor makes some incredibly unwise decisions about how he intends to secure he and Freya’s future, it’s only a matter of time before his willingness to use his fists to solve his problems leads to bloodshed.

What places Year firmly in the realm of Ozsploitation is its unwillingness to make emotional compromises. Australia is a naturally harsh climate, and to deny so would have meant death for those who initially settled it. The result is that Aussie cinema has a tendency towards confrontational honesty that many American films usually shy away from. Another writer/director would have made Trevor a brutal lout, a stereotypical bad boy who steals Freya away from the sweet and noble Danny. That’s not the case here, though, and just as much as this is a movie about Danny losing a potential girlfriend in Freya, it’s also a movie about him gaining a sort of ersatz brother. The two boys grow to genuinely care for one another, and, despite being older and more worldly, when shit hits the fan in the third act, it’s Danny that Trevor comes to for comfort and counsel. Ironically, each sees the other as the tougher individual: It’s easy to understand why Danny would envy Trevor and see brawn and brute strength as the key to a better life, but — though he’s reticent to admit it — Trevor himself envies Danny’s ability to get by in the world through his wits and charm. While Aussie cinema is no stranger to depicting the toxic relationships that can develop between men seeking dominance (Wake in Fright is perhaps the prime example), you’re just as likely to see tales of men and boys bonding together to survive using their respective skills (Picnic at Hanging Rock springs to mind on that front), and Year is a unique example of that dynamic unfolding in a teen context.

That emotional honesty carries over into the film’s central love triangle, which unfolds not unlike 1986’s Lucas, another movie about an isolated boy losing his best friend to a well-meaning jock. That film felt the compulsion to give us a sort of “out,” though, in the form of the titular character finding love in the end with a similarly withdrawn, isolated girl. There’s no such catharsis for Danny Embling, who, in just what may be one of the film’s defining scenes, finds himself forced to watch Freya and Trevor consummate their relationship when they mistakenly think he’s fallen asleep during a nocturnal outing. It’s the sort of emotional knife to the gut that no mainstream American flick would have dared employ in a film of this vintage: Danny must either keep his mouth shut and endure the resultant trauma or speak up and potentially derail the budding romance between two people he genuinely cares for.

Far from giving Danny any sort of emotional out, the film doubles down on the idea that sometimes life is just as harsh as the unforgiving environs that spawned this story: Our conclusion doesn’t find a happy Danny running through the brush with either Freya or some consolation love. Rather, it ends on a decidedly mordant and bittersweet note. Danny watches a beloved friend depart from his life, all while the two vow — in classic teen movie fashion — that they will see each other again, that theirs is a friendship that will stand the test of time. This leads into the film’s final line, which just might stand as one of the most emotionally raw and devastating closers in the history of Ozsploitation, or indeed any coming-of-age drama. Year understands, in true Ozsploitation fashion, that sometimes there are no winners: only survivors.

Aside from its brutal emotional rawness, Year is also thoroughly Aussie in the role the environment plays in the film. The New South Wales of writer/director John Duigan’s version of the 1960s is something of Australia herself in microcosm: a civilization on the cusp of suburbia and the wilderness, a perfect fusion of The Bush and the ‘burbs. The pub/boarding house Danny’s folks run is something out of a Norman Rockwell painting and perfectly in line with most Westerners’ concept of pre-Vietnam life, but surrounding it is a veritable oasis, a world of verdant, sprawling meadows and natural wonders that seems positively prehistoric to the non-Australian eye. It’s an almost untouched naturalist’s paradise, its promises of outdoorsmanship and exploration made all the more poignant by the jarring presence of an Amtrak-style train in one of the film’s closing moments, hinting at the encroaching modern era. It’s a world where no one bats an eye at a teenage boy running around with a rifle strapped to his back — hell, it’s a world where teenage gun ownership isn’t even thought twice about (in a moment that will loom large in the minds of anyone watching the film from the perspective of 2020, Danny runs into a teen hangout with his gun and is immediately chastised by the owner … for not storing it in the gun area. Without missing a beat, Danny doubles back and deposits his firearm in a designated space near the door, then resumes his carousing). While so very many American coming-of-age films work so hard to emphasize time and place as character, Year is unique in its very sense of timelessness. Even the soundtrack is a mish-mash of songs and radio programs from a variety of eras, giving the film a simultaneous sense of timeliness and timelessness.

Year was the first in an intended trilogy that would trace the evolution of Danny Embling through three defining periods in his life; the sequel, Flirting, made four years later, lacks much of the grit that made Year so powerful. A boarding-school tale more in the vein of Dead Poets Society by way of Guess Who’s Coming to Dinner, it has a simultaneously sweeter and more hopeful undercurrent, and even in its exploration of darker themes such as colonialism, racism, and classism, it’s far too hopeful and far too enmeshed in the optimism of the 90s to stack up against Year’s Ozsploitation cred. An interesting footnote: The presence of Thandie Newton and Nicole Kidman in the Flirting cast — not to mention Noah Taylor’s iconic role in Cameron Crowe’s Almost Famous — helped it gain some mainstream American attention. That itself had the effect of granting Year some retroactive U.S. interest, although it never gained the stateside fame or esteem of its star-studded successor. By 2003, when I sought out my own copy, I had to special order it from a closing mom-n-pop in Washington. Even as of 2019, Year has only been issued once on DVD in the states, in a limited run that now regularly goes for $80 a pop on Amazon.

It’s a shame, and, if this series accomplishes nothing else, I hope I’m successful in igniting stateside interest in Year to the point that sufficient calls are made for a proper Blu-ray release. As far as coming-of-age tales go, Year is near the top of the pile, and it’s a simultaneously tough yet heartfelt tale more people need to see.