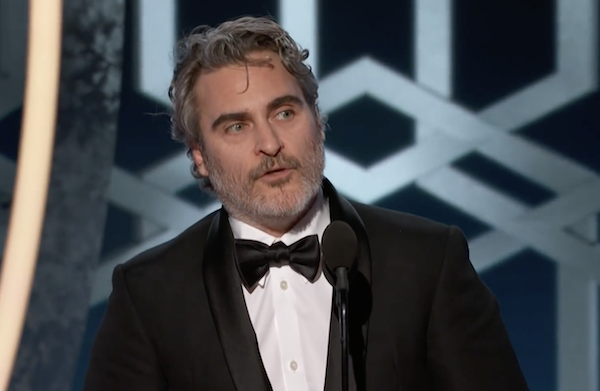 I have a fair number of issues with Nick Denton, the founder of Gawker, but I’ve always thought he was onto something about modernity and the difficulty we find ourselves in.

“If there's a gap between your private behavior and your public status, that's what makes the story for us,” Denton told Playboy back in 2014. “To my mind, the only real modern sin is hypocrisy.”

Again, this is a very modern (or perhaps post-modern) notion, one that is essentially only possible in an age that rejects basic things like “truth” and “goodness.” But there’s a certain logic to it. If there is no external arbiter — no moral code from a burning bush commanding we do this and that; no judgment of any lifestyle, no matter how odd — the only thing that really matters is internal consistency. “Do as I say, but only so long as I do it, too,” or some such. Fair enough.

This is why Ricky Gervais’ sets at the Golden Globes are so amusingly provocative even while they’re fairly predictable. It’s not hard to guess what the targets will be because the targets are so bleeding obvious.

“Apple roared into the TV game with The Morning Show, a super drama about the importance of dignity and doing the right thing, made by a company that runs sweatshops in China,” Gervais cracked. “You say you’re woke, but the companies you work for, it’s unbelievable — Apple, Amazon, Disney. If ISIS started a streaming service, you’d call your agent.”

It’s funny because it’s true! He might’ve taken it a step further and indicted the audience at home along with the crowd of swells — as if most Netflix subscribers wouldn’t hop on ISIStreaming if the terrorists acquired the rights to Friends and Seinfeld — but, then again, the audience at home has always seemed pretty comfortable with sitting there and enjoying their Apple goods without worrying one whit about the suicide nets in Shenzhen.

Jokes about Weinstein and Epstein were met with groans, in part because there’s nothing to do but groan when someone reminds you that you’ve danced with the devil for far too long to avoid getting singed. The set wasn’t perfect — the bit about women directors was poorly conceived and even more poorly delivered, Gervais stumbling through it as if he lost faith in the punchline halfway through — but the whole thing was spicy enough to entertain those who turned in expecting a mild roast.

Gervais earned some finger wags from the scolding set by telling the winners that they should stick to movies and stay away from politics. “The last thing anyone needed was for the smirking master of ceremonies to reprimand them for having hope, or taunt the room for trying to use their influence to change things for the better,” wrote the Los Angeles Times’s Lorraine Ali. “The commentary would have meant far more if Gervais himself had been brave enough to drop the tired agitator shtick and, for once, read the room.”

Yes, as we all know, true bravery is Michelle Williams telling a 99 percent pro-choice room that abortion is Good, Actually.

The funniest, truest, and bravest moment of the night belonged to neither Williams nor Gervais, to my mind. It came later in the show, when Joaquin Phoenix accepted his award for best actor. The first portion of his speech was heavily censored, given his propensity for dropping f-bombs. The second portion of his speech was also heavily censored, as it led to his being played off the stage by the band. Phoenix’s misstep? Reminding the audience that most of them are guilty of Denton’s one modern sin.

“It’s great to vote, but sometimes we have to take that responsibility on ourselves, and make changes and sacrifices in our own lives,” he said. “We don’t have to take private jets to Palm Springs … and back,” he continued as the music swelled and the conductor desperately tried to get him off stage.

Phoenix promptly wrapped things up, but the whole sequence made me guffaw harder than anything else that happened last night. It was the one moment that featured an actual call to change that might make some marginal difference in the world — and it was too awkward to let play out. You could practically feel Leo’s glare from off camera.

Anyway, there’s One Neat Trick for depriving this sort of “right-wing talking point” of oxygen: Just, you know, stop being hypocrites. Until that happens, the Gervaises of the world are never going to run out of ammo.