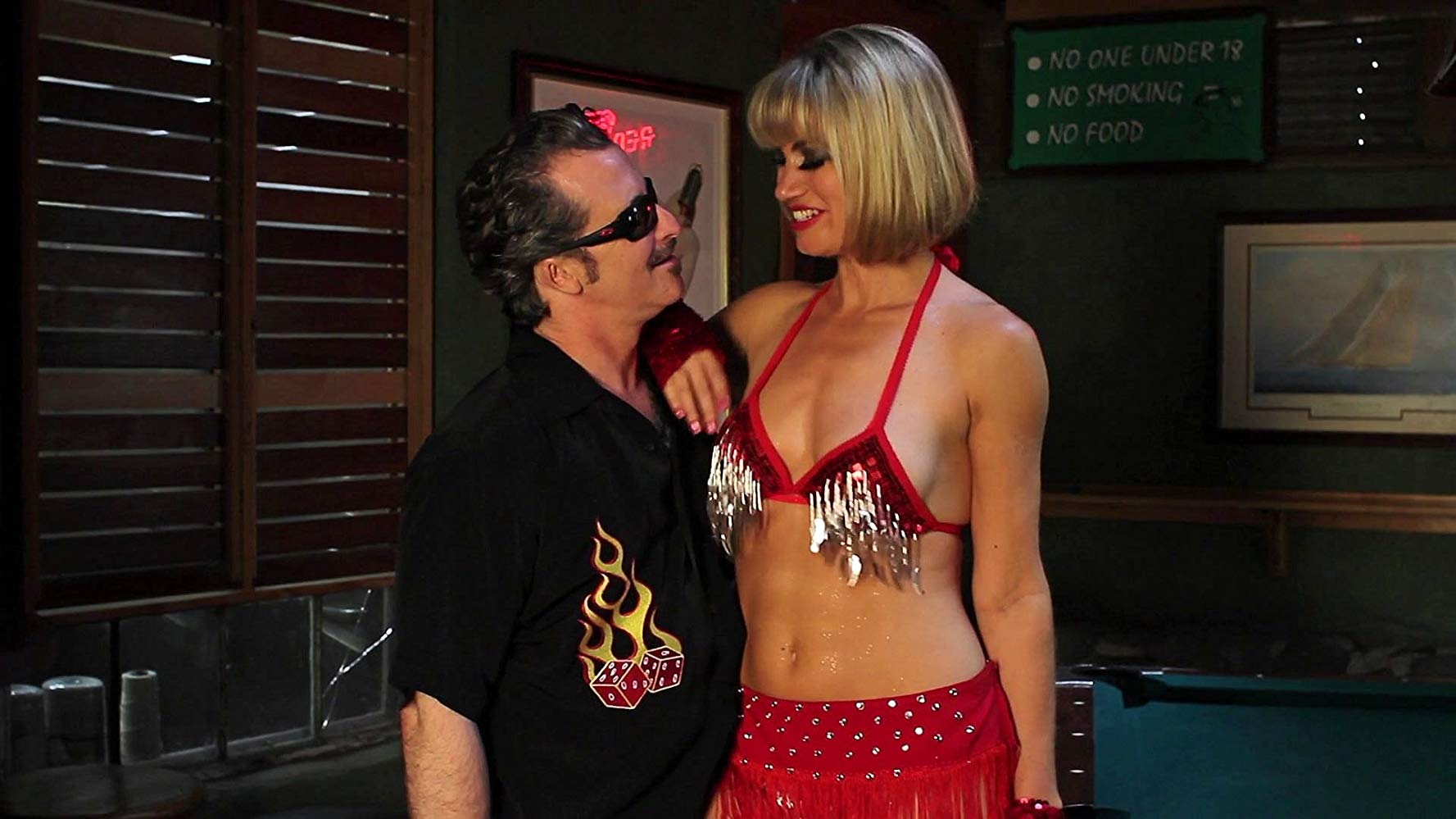 I can’t quite recall how it got started, but, somewhere along the line, it became tradition every year for my wife and I to watch bad movies while we do our Christmas and Hanukkah wrapping. There have been a few exceptions: Once, we made the inexplicable choice to watch Sinister the night before, so we were in the mood for something assuredly lighthearted and watched Whit Stillman’s Damsels in Distress instead. Another year she was sick and I did the wrapping myself, so it was Deep Space Nine. For the most part, though, breaking out the paper and bows also means putting something really, really shitty in the DVD player and tearing it a new one. Because we’re fucking hipsters, we usually try to find something a little more obscure — something that has never graced the screen of MST3K, a movie that isn’t a staple of the midnight circuit. Thanks to the dearly departed Hastings (and the thankfully extant Family Video), we’ve been able to see some real stinkers over the years. Nothing has stood out, though — nothing has been as simultaneously terrible, enjoyable, hilarious, sleazy, and baffling as Showgirls 2: Penny’s From Heaven.

Yeah, they made a second one.

Yeah, we were surprised too. Why do you think we rented it?

Any movie that would dare bill itself as a sequel to Showgirls was already setting a pretty high bar for itself. After Rocky Horror but before The Room (and, if current trends hold up, before Cats), Showgirls was, briefly, the ‘90s byword for trashy, laughable excess. Winning a then-record-breaking seven Razzies (its nomination for 13 has never been broken) it was the film that boasted a Rotten Tomatoes consensus of “Vile, contemptible, garish, and misogynistic” and was so terrible that Kyle MacLachlan went on the record to bash his own performance. Not content to rest on its laurels, in 2000, it won another Razzie for Worst Film of the 1990s. What more could a sequel have to offer? Could it possibly top its storied predecessor?

The answers: A lot; and, depending on how you look at it, yeah, kind of.

The story of Showgirls 2’s genesis is almost as strange as the film itself. Do you remember the character Penny from the first Showgirls, as played by Rena Riffel? You may not, but Riffel sure did. For some reason, the role really stuck with her, to the point that, in 2010, she decided to write, direct, produce, and star in a film all about her. Partially backed by a Kickstarter campaign that managed to raise $5000 (which is about $4,500 more than what shows onscreen), the film was released in 2011 to a world unprepared — nay, undeserving — of something so cosmically, awfully wonderful.

I’m going to go ahead and say up front that I think Riffel at least partially knew what she was doing. Of course, no one writes, directs, produces, and stars in a film without at least some motivation towards it being a massive vanity project, especially when said individual chooses to spend about 30 percent of the film topless. Riffel is also a seasoned veteran of such B-fare as Caligula's Spawn, Dark Confessions, and Scandalous Behavior. So, a big part of me thinks she knew exactly what she was doing — putting her alongside Doug Campbell as one of the few directors capable of making an intentionally bad yet still enjoyable film.

So, what is Showgirls 2? It’s partially a parody of the first Showgirls. It’s also partially a remake of it. It’s also partially a Hollywood epic, the two-and-a-half hour(!) saga of one woman’s attempt to make it in the twisted, cutthroat world of entertainment, no matter the cost. Riffel, as Penny, makes her way West from Las Vegas, intent on becoming the next hot young starlet in Hollywood. Rather than have her eye on the movies, though, Penny wants to become a performer on Stardancer. What is Stardancer? That’s an excellent question — the movie doesn’t quite seem to know how to answer it. Practically speaking, it’s a television series that’s apparently meant to be something akin to a 2000s version of American Bandstand, featuring half a dozen scantily clad women languidly gyrating towards the camera, over and over again, to the same generic MIDI music. Within the world of the film, it might be the most watched show on TV, or … something? Whatever it is, Penny is determined to become one of the Stardancers, by hook, crook, or awkward lesbian seduction.

First and foremost, the production qualities of Showgirls 2 are terrible. The audio sounds as though it was all taken on location, with that whooshing open-air sound present in between dialogue and varying levels of muffledness and coherence from the performers. The sets all seem to be whatever houses, clubs, or businesses Riffel had at her or her friends’ disposal, leading to varying levels of credulity as to what we’re seeing. For example, the aforementioned Stardancer set is literally a dimly lit, roughly 10x10 back room in a business somewhere (my guess is either a recording studio or a strip club), even though it’s supposed to be a nationally televised, phenomenally successful dance program. The color correction is hilariously off in numerous scenes, to the point that both men and women’s lips (and the many, many nipples on display) look varying shades of fuscia, hot pink, and magenta. The cuts are choppy, and sometimes you’re not sure what’s happening or why because a transition has occurred so hastily.

And the script? Oh, the script. Riffel promoted the film as “Sunset Boulevard meets Whatever Happened To Baby Jane? meets Mommy Dearest in a G-String!” and, yeah, that’s a pretty accurate summation. She seems determined to make a film with every Hollywood cliché and exploitation trope out there, and I gotta give her credit — damned if she didn’t do it. You want pill popping? Rena Riffel will give you pill popping. Lesbian experimentation? Rena Riffel will give you that plus shocking pink nipples. Catfights, backstabbing, and wanton murder? Check, check, double check.  Illuminati conspiracies and Satanic sacrifices? Rena Riffel will go full Russ Meyer on your ass, and you will like it. There isn’t a B-movie touchstone that goes untouched, not a single missed opportunity to be completely, unapologetically over the top; and what’s more, Riffel does it with the sort of sincerity that makes films such as The Room so stupefying and captivating. Just the right amount of intentional camp coalesces with just the right amount of genuine ineptitude to create a work of sheer, comic brilliance. If this were about an hour shorter, I’ve no doubt it could be another Rocky Horror, though I’m reticent to say what exactly should be trimmed out. Part of the film’s charm comes from its bravely bloated running time — it’s almost daring you with an endurance challenge of badness.

From a sociological and filmmaking perspective, there’s also something kinda groundbreaking about Showgirls 2. As I pointed out, this is Riffel’s passion project through-and-through. Very few women have such control over their own creative work, period, and to my knowledge, this is the first instance of a female filmmaker wielding such control in the dual avenues of exploitation/B-cinema. From that standpoint, this might be a true breakthrough film, and it’s fascinating not just to observe that achievement but to get an idea of what it looks like when the feminine gaze is applied to traditionally masculine exploitation conceits. It’s interesting to see where certain areas cross over (tons of nudity), but also where they diverge — not only do women enjoy the majority of the screen time and dialogue, but much more attention is paid to the relationships between Penny and the various women she meets than would be the case in most expy films. For that achievement alone, the film needs to be seen by any B-film connoisseurs, and Riffel deserves genuine adulation and respect. Years before Patty Jenkins was bringing Wonder Woman to life, Riffel had already created a very different — but no less special — epic of her own. Kudos, Rena Riffel. Welcome to the B pantheon. I welcome you — and I encourage any other aficionados of bad cinema to extend that welcome, too.

Preston Fassel is an award winning author and journalist whose work has appeared in FANGORIA, Screem Magazine, Rue Morgue, and on  Cinedump.com; his first novel, Our Lady of the Inferno, won the 2019 IPPY Gold Medal for horror.