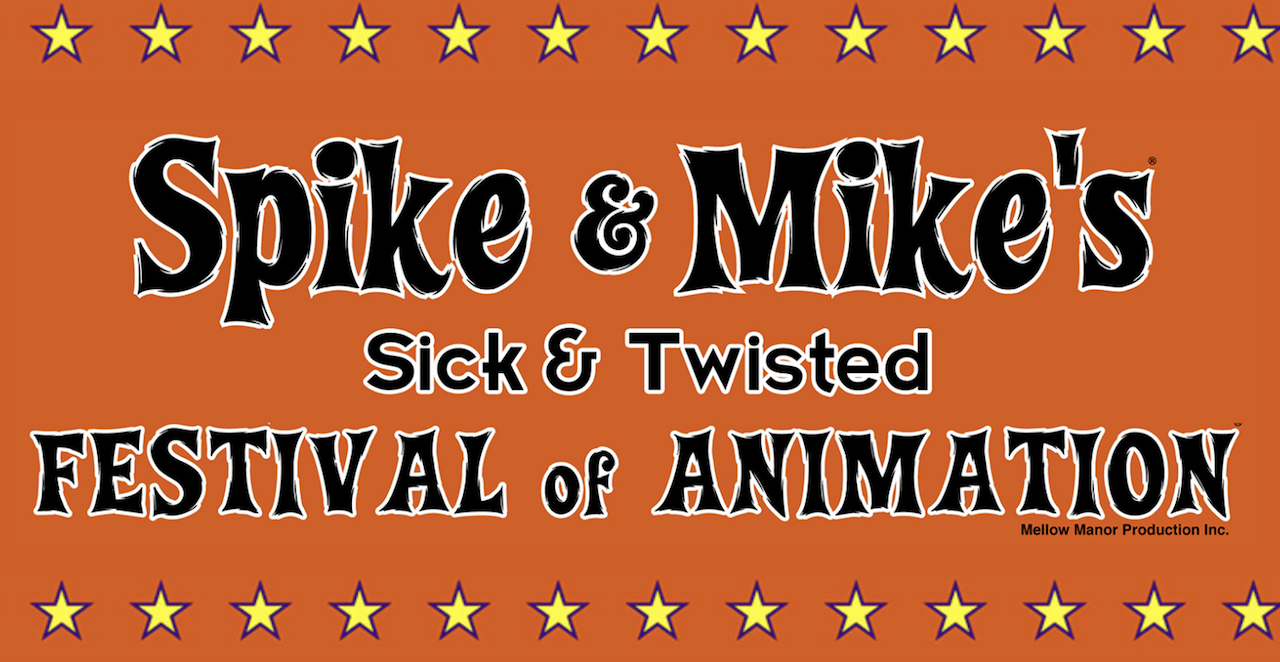 ack in 1990, there wasn't exactly any easy way to view strange, esoteric, animated shorts. The launch of YouTube was still 14 years away, and even Adult Swim was more than a decade off.

The festivals, which continued for a dozen years, traveled around the country to raucous audiences, something like Rocky Horror Picture Show meets The Grateful Dead. "Like a concert for nerdy animators," animation director Mike Mitchell called it. There were costumes, and inflated sex dolls passed around and even a dog named Scotty, who would run around the stage between films. I was a frequent attendee of the Sick and Twisted Festival's annual stops at the Coolidge Corner theater while at college in Boston in the 1990s.

Not only did the festival give birth to a wild scene, it also featured work from a long list of animators who would go on to prominence in the world of more mainstream animation, guys like Mike Judge, Craig McCracken, Bill Plympton, John R. Dilworth, Don Hertzfeldt and others. The Spike and Mike epoch is the subject of a new documentary, Animation Outlaws, which has been showing at film festivals, including Woodstock and Slamdance.

The director of Animation Outlaws, Kat Alioshin, was part of the Spike and Mike scene. While a college student near San Diego in the late 1980s, she worked as a flier distributor in those pre-internet days.

"We'd hit up the gun shows, or the football matches, or baseball games or concerts — we're talking thousands and thousands of fliers," Alioshin said. She also worked at the box office.

Mellow Manor was the name of the production outfit that produced the shows, and it took its name from the street where Spike, Mike and others associated with the scene lived together in a group house in Riverside, Calif.

In the early days, the festival sourced its submissions mostly from Mike's travels to Europe, where he attended events such as the Cannes Film Festival, Cardiff Animation Festival, and the Annecy International Animated Film Festival. There, he would make connections with filmmakers, and talk to them about bringing their work to U.S., which had historically lacked a robust animation festival scene.

It was clear there was demand for a more adult-oriented festival by 1990, which gave rise to Sick and Twisted. The original festival continued, a la Coca Cola, with a modest addition to the title: Spike and Mike’s Classic Festival of Animation.

"They would do regular shows at 7 o’clock and 9 o’clock," Alioshin said of the pre-Sick and Twisted era. "Then they would do a midnight show, where they would show stuff a little bit more risky. At some point, they were turning down some animation, where they thought it was just too much, and we'd have to monitor that [it was] 18 and older."

One thing that inspired the launch of the Sick and Twisted festival was the rapturous response from a college crowd to a screening of Danny Antonucci's 1987 Lupo the Butcher, a three-minute short featuring a frustrated butcher and a series of extended accidental dismemberments. Antonucci would go on to create the considerably less bloody Cartoon Network series Ed, Edd n Eddy.

"The response to [Lupo the Butcher] was kind of the catalyst that said there are animators doing this kind of work out there, and there's an audience for it," Alioshin said. The Sick and Twisted Festival, once it launched, tended towards the scatological, the perverse and the violent.

The first Sick and Twisted lineup was shown at Wheeler Auditorium at the University of California at Berkeley in 1990. It was soon a huge hit, filling theaters around the country.

"There's a lot of animators that work in that world who really in their heart is to be sick and twisted," Mike Mitchell, director of Trolls, The Lego Movie 2: The Second Part and many other Hollywood animated movies, says in the documentary. "And so, Spike and Mike was a safe place for them to go, when they wanted to be crude and rude."

The 2015 movie Sausage Party, for which producer and star Seth Rogen teamed up with animation directors who spent their careers in children's fare but were looking to put much more perverse ideas in play, saw a similar dynamic play out.

"When they got to Sick and Twisted," Alioshin said, "they actually started generating some of that content themselves, hiring and getting animators to do production with them and for them."

One critic described 1993's Sick and Twisted lineup as "32 of the worst things you could show to your baby brother or sister."

As the festival went on through the years, it would debut new shorts with each installment. But certain films became mainstays of the festivals, such as the "No Neck Joe" series, from Craig McCracken, who would go on to create The Powerpuff Girls:

And then there was Dirty Birdy, a seven-minute short about a bird standing on a tree branch and repeatedly attempting moon a cat, to repeated violent retaliation. The film, which could spawn dozens of think pieces or graduate theses about sexual harassment and #MeToo, was created by John R. Dilworth, who would go on to create Courage the Cowardly Dog:

Alioshin describes Snookles, by Julia Stroud, as her personal favorite:

Alioshin has gone on to a professional career in animation, with credits that include Tim Burton's The Nightmare Before Christmas, Corpse Bride and James and the Giant Peach.

The documentary consists of clips from 65 of the animated films, as well as numerous interviews with the animators and others from the scene. Working in animation has given Alioshin access to many of the people who participated in the film, including Pete Docter and Andrew Stanton, who made films in Spike and Mike's Classic festival and have since each directed multiple Pixar features. They appeared for their documentary interview "on their lunch hour," she said.

Nick Park, the creator of Wallace and Gromit, is interviewed in the documentary, and is shown thanking Spike and Mike from the stage when he won an Oscar for Best Animated Short in the early '90s. Also interviewed is "Weird Al" Yankovic, who frequented the festivals and even used to play his accordion on stage at them. Seth Green, the actor who would go on to create Robot Chicken, says in the documentary that "when Sick and Twisted started, I know that I had found my people."

Mike Gribble, the half of the duo who typically hosted the shows, died of cancer in 1994, but the festivals continued into the early 2000s. Spike and Mike's occasionally gets one-off revivals, including at each year's San Diego Comic-Con. But one saving grace for fans of the festivals is that the majority of the key shorts from that era are available on YouTube and other online platforms.

That shift has put into place a dichotomy that's also in existence throughout the world of entertainment: There may be fewer barriers to getting one's work out there, but at the same time there are more barriers on monetization.

"That access of any animator being able to put a video on kind of changed the idea of going to a theater to pay to see it," Alioshin said.

Animation Outlaws was scheduled to be shown at March's Albany Film Festival, with another screening scheduled for The Fox Theater where it all started, Riverside, in May. (The Albany Film Festival has been canceled because of the coronavirus outbreak; no word yet on the Fox Theater show, though tickets remain on sale for now.) The documentary is awaiting distribution.

Stephen Silver is a journalist, essayist and film critic, who is a contributor to The National Interest, Philly Voice, Philadelphia Weekly, the Jewish Telegraphic Agency, Living Life Fearless, Backstage magazine, Broad Street Review and Splice Today. The cofounder of the Philadelphia Film Critics Circle, Stephen lives in suburban Philadelphia with his wife and two sons.