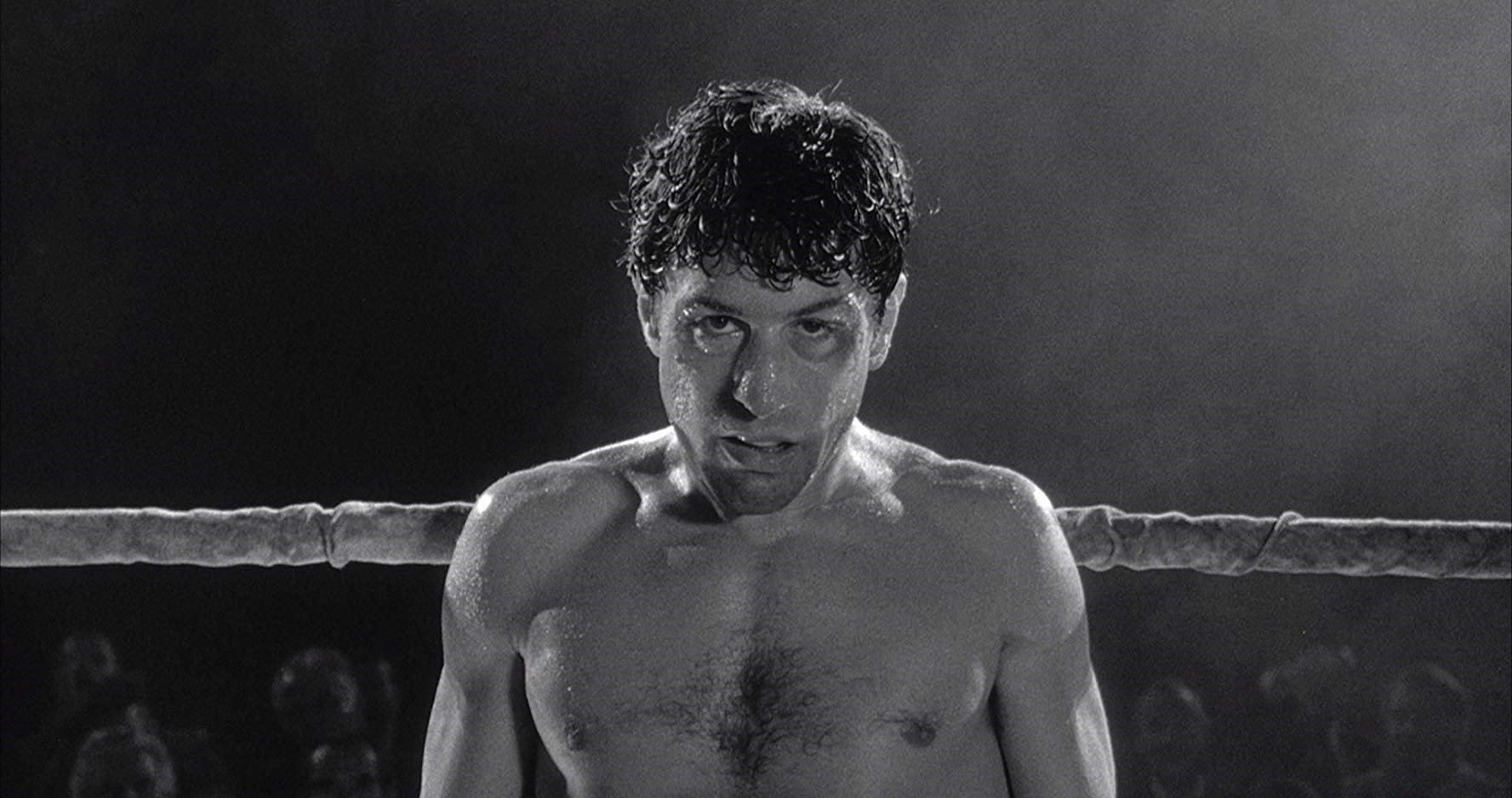 aging Bull — a complex character study about methods and codes of conduct — all too often gets reductively tagged as Martin’s Scorsese’s toxic masculinity sports movie that allowed Robert De Niro to lose (and gain) weight in pursuit of an Oscar. Occasionally, it even gets lumped in with Scorsese’s “gangster movies” as a shorthand to dismiss the director as a one-trick pony. In today’s film culture, the morally righteous are always quick to point out that Raging Bull’s subject, a real-life boxer named Jake LaMotta, isn’t “relatable” or “likable.” And why? Because he does things, in a movie, that should NOT be done in real life. But here’s the thing: Scorsese didn’t intend to make an uplifting boxing drama like Rocky. He directed a movie for self-aware adults with a basic understanding of how emotional intelligence works. Raging Bull is a direct cinematic descendant of Italian Neorealism (movies about survival) and deconstructs a troubled man’s code complex.

People often confuse performance with character. For example, take a look at think pieces on Quentin Tarantino’s Once Upon a Time in Hollywood. There is loads of content about the characters Rick Dalton and Cliff Booth — about what they mean in a world where masculinity is outmoded — but not a whole lot of substantial analysis about the performances by Leonardo DiCaprio and Brad Pitt. What specifically makes the performances effective, and how do the filmmakers amplify performances within specific settings? It seems that moviegoers often want to see a reflection of themselves, certainly in 2020, rather than observe and analyze the story being presented. With Raging Bull, there are so many big character moments, and so people tend to overlook the small intricacies of De Niro’s performance, along with the underlying commentary about character psychology.

Thematically, Raging Bull screenwriters Paul Schrader and Mardik Martin make LaMotta a polarizing figure, a man who correlates with Scorsese’s career-long interest in Caravaggio’s sacred and profane art. In the ring, LaMotta finds meaning and success. At home, LaMotta rages out and pushes people away. Raging Bull’s conflict derives from the subject’s life-long personality complex, as he lives by a certain code and uses intimacy to control others but clearly doesn’t understand why. Jake repeatedly attempts to manipulate situations through small physical gestures, a recurring theme from beginning to end in Raging Bull. As a performer, De Niro shifts between relaxed and domineering postures, between friendly and intimidating facial expressions, the art of inspiring a reaction. And it’s important to remember that Raging Bull’s LaMotta is a fictionalized version of the real boxer. His story was tweaked to provoke discussions about personal codes and complexes.

Visually, Scorsese creates a cinematic spectacle. Raging Bull  begins with an older LaMotta practicing a monologue and subsequently goes back in time for a boxing sequence full of primal sound design, surrealistic imagery and jump-cut editing. The implication: LaMotta is the King of the Jungle; mess with him and get dealt with. From a 2020 perspective, it’s this sense of overt male bravado that makes Raging Bull a convenient target for the extremely online and extremely woke crowd. But early sequences are critical to Jake’s character arc and the film’s critique of his behavior. Jake uses charm — natural or not — to win people over. Early on, De Niro fuses rhythmic and lyrical line readings with stiff posturing to show Jake’s influence over others and to emphasize his ability to keep people close by teasing a vulnerable side, even if there may be ulterior motives.

The LaMotta brothers joke around in that unique Italian-American way of performative teasing/arguing. It’s a recurring theme in Scorsese’s filmography, inspired by his familial experiences. At home, a sacred setting, Jake talks tough to wife Irma and unsurprisingly pushes her away, all the while prepping for a revelatory conversation with his trusted brother. The elder LaMotta, showing a vulnerable side, reveals that he’s insecure about his small hands and then challenges Joey to smack him in the face. De Niro, displaying his brilliance as a performer, does three important things. First, he understands that posture is crucial to the moment: He stiffens up, in a masculine sense, creating a noticeable power dynamic within the frame. Secondly, De Niro sternly locks his gaze, all the while speaking in the same lyrical style. Essentially, the raging bull establishes his territory, but then eases up to make his prey feel a sense of relief. After Jake establishes dominance, he grins at Joey and taps him on the cheek. That’s the Jake LaMotta code — keep people engaged and aware … yet somewhat fearful.

De Niro takes a similar approach during Jake’s first meeting with Vicky, only he prioritizes sensitivity over bravado. On the opposite side of a fence (literally), De Niro once again uses physical contact to demonstrate Jake’s ability to connect, gently pressing his hand against that of his (teenage) love interest. For the rest of Raging Bull, De Niro similarly uses his hands to show how Jake manipulates situations to his favor. The inherent moral conflict allows Scorsese to once again incorporate Caravaggian themes, evidenced by an intimate sequence that ends with a wide shot of Jake staged in the middle of frame with religious artwork on both sides. Of course, some people will watch Raging Bull and just see a guy trying to get another hand job.

With Raging Bull’s  extended montage sequence, Scorsese symbolically wipes away the not-so-distant past. The tough and tender Jake is gone. Now, he’s a paranoid husband who sees potential opponents everywhere. In the LaMotta kitchen, Vicky — now Jake’s wife — makes an innocent statement about up-and-coming boxer Tony Janiro being good-looking, and the raging bull naturally becomes suspicious. From this point forward, De Niro’s performance approach changes. Rather than underlining Jake’s tender side, he instead focuses on how the boxer attempts to control social situations, but without being physical (the violence comes later). These mid-movie sequences allow De Niro to communicate Jake’s growing insecurities through small movements and glances. The story isn’t his obvious misogyny but rather his rapid deterioration as a human and whether he can make it through without losing everybody he seems to love.

Jake’s mental health issues transfer to the boxing ring. He obliterates Janiro (a symbolic act to deal with subconscious insecurities) and then throws a fight to keep underworld figures happy. Jake’s professional code has been compromised, and so his personal code of conduct takes a hit. During a post-fight sequence, De Niro captures his character’s despair by sobbing uncontrollably and repeating the same line over and over (“What’d I do?”), a moment that thematically correlates with a climactic (and iconic) jail sequence.

When LaMotta prepares for a 1949 fight against French boxer Marcel Cerdan, De Niro once again uses non-verbal cues to establish control. The rhythmic and lyrical conversations from earlier are no more: Jake barks orders and stares for seconds at Joey; he slaps Vicky. Jake feels betrayed and underappreciated, both in his personal and professional life. A certain code of conduct has been devalued. All bets are off. And De Niro’s complete transformation into a raging bull personified is both terrifying and spectacular, even before he steps into the ring.

Raging Bull’s most disturbing sequence shows Jake physically assaulting both Joey and Vicky. To be specific, Jake punches his wife in the face. Naturally, this could trigger painful memories for some viewers. Jake’s meltdown sets up the rather important revelation that Vicky does indeed stay with Jake. Whether or not the morally righteous viewer agrees with her decision is irrelevant to the film’s story. It’s what happens. There are no suggestions to be made, by the viewer, to Vicky. This isn’t Bandersnatch. After the eruption, De Niro again uses physical contact to display Jake’s character’s gentle and vulnerable side. Is it a show? Probably. What’s clear, though, is that Jake’s gesture resonates with his wife. Now that’s a code complex, and it certainly applies to real-life relationships. With Raging Bull, viewers don’t have to pick a side, and shouldn’t. Anybody with a bit of emotional intelligence can spot the film’s underlying commentary about the complexities of the human mind.

Scorsese introduces various thematic elements throughout Raging Bull’s first two acts and then brings them all together in the end. Now older and heavier, Jake has accepted certain aspects of himself but still exhibits questionable behavior. In public, he uses a boxing persona to establish control at a club bearing his name. But Jake’s unresolved issues result in him making the same mistakes. He talks down to bar patrons, flirts with young girls in public, kisses a young girl and then gets arrested. These actions culminate with a dramatic jail sequence at Dade County Stockade, in which De Niro blends the violence of boxing with his character’s psychological turmoil. Jake repeatedly punches his cell wall, and De Niro returns to repetitive, lyrical phrasing, with the irony being that no one’s there to comfort him. But all is not lost, as Jake ultimately uses physical contact again (a hug) to save a relationship with Joey, who has experienced enough of his brother’s erratic behavior to know that it’s not the gesture that matters but rather the fact that Jake hasn’t given up entirely after all those years. Jake keeps fighting and reflecting, still trying to understand his code complex.

Raging Bull doesn’t promote violence, just like Scorsese’s widely misinterpreted 2013 film The Wolf of Wall Street doesn’t promote drug use and misogyny. In fact, Raging Bull reminds viewers, both then and now, that people deal with trauma in different ways and that life goes on despite significant setbacks. But that’s a tough concept to grasp for those who merely seek comfort from movies, rather than trying to understand more about themselves and the world as a whole.