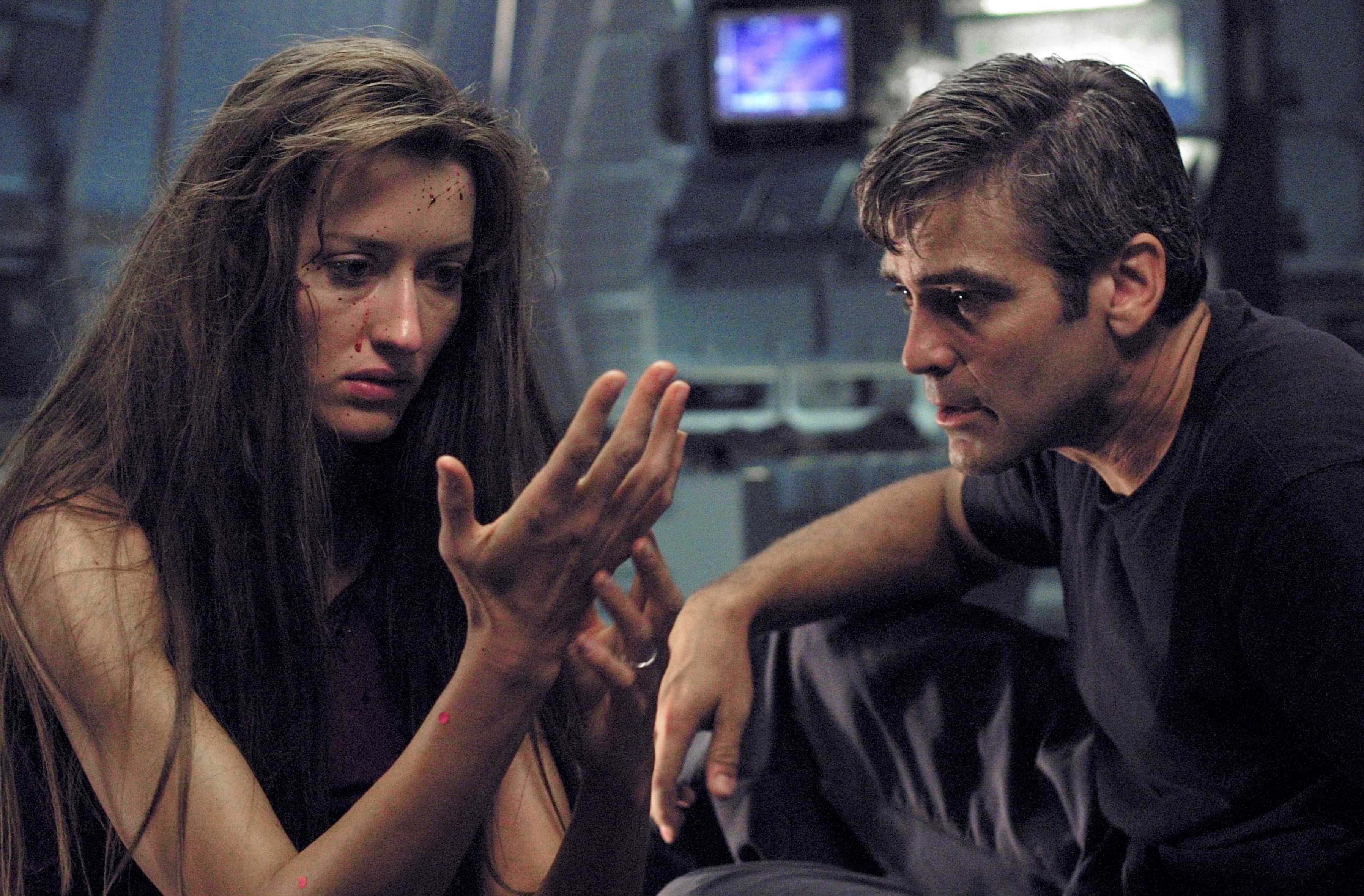 The F Bomb examines movies that earned the dreaded F grade on CinemaScore. Adrian Nguyen look into why the project blew up in the faces of the filmmakers and whether it deserved the dishonor.

ndrei Tarkovsky is the greatest Russian director of the 20th century and held cinema to a higher standard, often expressing frustration with studio-produced movies. In his view, Hollywood was so homogenized that it left many artists uninspired and prone to creating less intellectual work. Take a glimpse at any frame from Stalker, Andrei Rublev, or The Mirror and it's clear that he takes the art of filmmaking quite seriously, regardless of how much money it makes.

Solaris is perhaps Tarkovsky’s best-known work and his most accessible, as its science-fiction backdrop is more tangible. Based on the novel by Stanislaw Lem, it centers on a space station so isolated that the crew have become emotional wrecks. Investigating the damage and rescuing the attendants is Kris Kelvin, a psychologist who suffered personal trauma of his own in one of his space missions. It is also the story about aliens from the planet Solaris shapeshifting into different humans. During the journey, Kelvin meets what looks like his dead wife, bringing his demons to the fore again.

At almost three hours, Solaris is a deep and cerebral journey about loneliness and human consciousness; Tarkovsky’s metaphysical approach feels like the correct way to adapt the novel. In similar fashion to the actual space race at the time of its release, Solaris ranked next to 2001: A Space Odyssey as among the most influential sci-fi films ever made. (Tarkovsky was less impressed than critics; he described it as “a lifeless schema with only pretensions to truth.”) Kubrick was interested in the next great step in space — from the bone-throwing first men to the monolith to HAL-9000 to the Star Baby — while Tarkovsky contemplated the state of beings through memory. If nothing else, Stanley Kubrick’s epic motivated Tarkovsky to make Solaris to prove that science fiction films could have more emotional depth.

Tarkovsky’s opinions on Western cinema were surely harsh, believing it lacked the sincerity needed for art to be transcendent. Which is why the contrast is made more jarring when Hollywood took an interest in adapting Lem’s novel again to make its own version of it. For a long time, James Cameron briefly attached himself to the project but was busy with other commitments, such as directing Titanic (he’s still credited as a producer). Eventually, it wound up in the hands of Steven Soderbergh, fresh off of Traffic and Ocean’s Eleven. George Clooney was eager to play Kelvin. Production was rushed, mainly because Soderbergh and Clooney had other commitments.

Solaris grossed $30 million worldwide, well below its budget of $45 million, finishing seventh at the domestic box office behind Die Another Day, Treasure Planet, and Eight Crazy Nights in its opening Thanksgiving weekend. Audiences in its first week gave the remake an F, because the movie was marketed as a cheesy space romance starring a hunky George Clooney — a campaign he admits was indeed misleading.

CinemaScore has sometimes been unkind to Soderbergh. While he makes blockbuster ensembles that could bring people straight into the multiplex (Out of Sight, the Ocean series, Contagion), he sometimes integrates experimental sensibilities that mainstream audiences might find a turnoff.

Soderbergh and Clooney were major players in Hollywood. Back then, Clooney was a solid box-office draw, thanks to his Cary Grant-esque demeanor, and he plays Kelvin as duly quiet, preceding similar roles like those in Up in the Air and The American. That suave aura, while distracting to the character, does grant subtleties that keep Kelvin’s emotional weight flowing. Clooney succeeds by being largely restrained, expressing bold emotions such as anger and grief only when required to make his anxiety more urgent.

Soderbergh has a lot of admirable qualities that put the remake in a better light when compared to Tarkovsky’s. A key difference between the two versions of Solaris is that Soderbergh’s clocks in at a relatively trim 104 minutes, cutting a number of scenes from Tarkovsky’s version without removing what made it spellbinding. For example, Soderbergh cuts to the chase in sending Chris to the Space Station immediately; Tarkovsky took 45 minutes to get to that point. Anyone who did not have the attention span to get through Tarkovsky’s version should find Soderbergh theoretically refreshing in comparison.

In typical Hollywood fashion, Solaris 2002 invites recurring flashbacks through different techniques, rather than emulating any of the elongated shots for which Tarkovsky is most notable. Fade-ins and -outs are utilized when Chris and Rhea are intimate; dizzying hand-held camerawork is used when they are distressed. To my surprise, this approach is rather effective, as it shows the memories occupied with Rhea are made malleable to reflect the shapeshifting on the planet. Probably the best use is a shot-reverse-shot approach, as Chris sees her from the flashbacks seen earlier. In a blink of an eye, her appearance changes, playing with the ambiguity of the planet.

But the differences that made the remake look as good as the original ends here. For one, Soderbergh vied for a station that looks typically futuristic, saturated in blue hues, while Tarkovsky aimed for a retro approach, where the corridors are empty and machinery continues, malfunctions, and falls apart. While Tarkovsky’s planet is shown in ochre yellows with the waves moving slowly, here it’s a space station surrounded by a sea of violet nebulas. That design makes it indistinguishable from any sci-fi movie with a similar shot.

Another weakness was what Soderbergh adapts from Lem’s novel. It’s worth noting that Lem disliked both versions of his novel. He never cared for Tarkovsky’s take, since it wasn’t a faithful adaptation. Nor did he care for Soderbergh’s — though his judgment came from reviews rather than having watched it. Lem’s approach was more esoteric. His novel was a psychoanalytic take on why humans fail to understand extraterrestrial intelligence, arguing it shouldn’t be reduced to the concept of humanity. His point is proven in the cheesy and contrived ending, when Chris finally reconciles with Rhea, asking him if she was dead or alive. It’s as if Soderbergh is constrained to making a movie that vaguely touches on these ideas.

Solaris did earn some critical champions, despite its lukewarm reception. Andrew Sarris preferred Soderbergh’s iteration to Tarkovsky’s, scoffing the latter as “mostly male debate societies.” Time Magazine placed it as one of the best Hollywood remakes, acclaiming it for extracting what is supposedly  rare in science-fiction: emotion. Roger Ebert also echoed that sentiment, further claiming that it “evoked one of the rarest movie emotions: ironic regret.” What that insinuated was common to what Tarkovsky thought about commercial cinema: that sentimentality laced upon Hollywood cinema is unearned and contrived, and that’s at least something when a foreign remake succeeds in doing it. But to be frank, many other movies, past and present, have achieved that goal as well.

Regardless of whether they are familiar with Tarkovsky’s version, Solaris failed with audiences, not just because they didn’t expect George Clooney to be pensive, but because it looked generic. After all, what is the point of doing another Solaris, when the one from 1972 already exists? Is George Clooney no Donatas Banionis? Were similar topics not handled more entertainingly in Event Horizon a few years previously? Still, it is thankful that a remake can breathe on its own without having to compromise the vision of the original. It’s hard to imagine that Tarkovsky would change his mind about commercial cinema, had he sat through the remake. But at least he would know that when you’re adapting something familiar, you don’t have to fully compromise your artistic integrity.