The Queen of Costuming: Meet Marilyn Vance, the woman who clothed the REBELLER canon 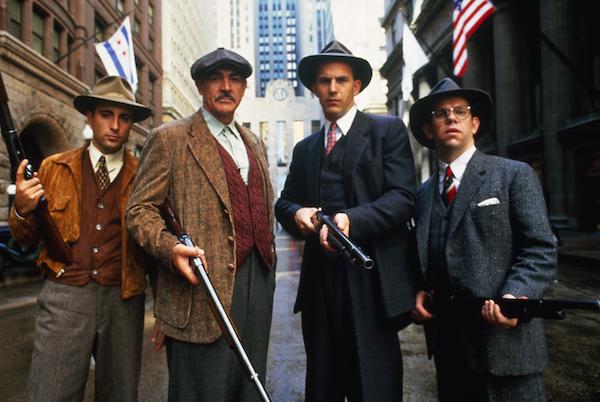 'The Untouchables,' for which Vance earned an Oscar nomination

The Queen of Costuming: Meet Marilyn Vance, the woman who clothed the REBELLER canon

If you’ve seen an iconic film from the 1980s, you’ve seen costume designer Marilyn Vance’s work. From Phoebe Cates’s red bikini in Fast Times at Ridgemont High to Molly Ringwald’s customized pink dress in Pretty in Pink to Bruce Willis’ undershirt in Die Hard, Vance is responsible for all of those cinematic touchstones and then some. Over the course of a nearly 40-year career, Vance has racked up over 60 credits and earned an Oscar nomination for her work on Brian De Palma’s The Untouchables. She has worked multiple times with directors such as Walter Hill, John Hughes, and John McTiernan, and her work has come to define an era of film while still feeling fresh.

Her designs are accessible — even viewers who aren’t specifically into fashion can recognize the characters in the films she’s worked on as innately stylish — and eye-catching. Talking to Vance, it’s clear that she’s always been driven by the desire to create. Costume design may be a job at the end of the day, but a lot of thought and creative energy goes into every stitch of clothing. While the designer acknowledges that you never know, in the midst of working on a film, if it will end up becoming a classic, the fact that so many of her projects are not only beloved by generations of audiences but often remembered for standout fashion moments is a testament to her keen eye.

“I come from rock and roll,” Vance says, by way of describing her start in the industry. Vance’s husband at the time was a musician who was working on films. When some people from Universal Studios came to meet with him in New York, they saw her designs in her showroom and said she should consider designing for film. “They watched me psychologically sell somebody a line of clothes and tell them how they could use them for their store. They thought, ‘that was pretty good, she can explain stuff’,” she says with a laugh.

One thing led to another: “I came out to L.A. and I said ‘I’m here to design for you!’… I was so naïve about it.” She started taking assistant jobs, feeling a sense of frustration familiar to those working their way up in any industry: “I thought so much of myself and there I was answering phones and getting lunch.”

But paying her dues ultimately paid off: “I got to see how things worked.”

Vance’s first credit as an assistant was on the 1980 camp-fest Xanadu. From there, Universal put her through the Costume Designer’s Guild, and she started picking up projects.

“I was very fortunate. I didn’t realize how lucky I was that they put me through the union,” she acknowledges. She started working “for real” before she even had an agent. And so began a prolific run of designing.

“All I wanted to do was work. I’m an artist, a designer. I can’t stop. I paint also. I make sculptures,” Vance says.

She’s always had the artistic gene. “My mother and father made me want to go into design. My father was an artist and my mother was a wonderful person who’d go shopping for me and bring me clothing I couldn’t handle. That was when I taught myself to sew. I’d cut things up and put them back together. My father was a milliner. They were both the people that turned me on to creativity and art. My father taught me to draw. I learned from them. I loved fooling around with clothing and colors.”

In 1982, Vance made her official debut as a costume designer with Amy Heckerling’s star-making high-school film Fast Times at Ridgemont High. To prepare, she visited California high schools to see how students dressed. That same year, she worked on Walter Hill’s action comedy 48 Hrs.

“In the script, it said Eddie Murphy gets out of jail and pulls out a red satin suit,” she recalls. “And I said, ‘That’s ridiculous. Why would he have a red satin suit? We’re showing how smart he is, that he hid money, and then he pulls out a pimp suit? It just doesn’t make sense.’ I thought I was gonna get fired.” Vance was determined to use clothes to better explain the character.

“I went to look for a suit that would be good for him, that his character could come back and get after being in jail. That’s when I got GQ and Esquire and found a picture of this lovely double-breasted short-cut suit—Eddie’s not the tallest and he runs around so much that I wouldn’t want the jacket to fling open. So, I wanted him to look like the smart guy. I saw it was Armani so I called them in New York. I asked if it was possible to get it and they said they could make it. I wanted it in a very conservative fabric. I called a jobber who got a Prince of Wales Glen plaid from London. It was sent to Italy, and Armani made me 6 of those suits.”

Vance’s vision proved her point and improved the movie, leaving the suit as described in the script a distant memory. The film was also the debut of producer Joel Silver, with whom Vance worked on a significant number of films.

“The producers take major responsibility. I’ve done 15, 20 films with certain producers,” she says. “I work more closely with them than directors.”

Vance’s work on 48 Hrs. led to her getting more work on action films (Die Hard and Predator among them) — disproving any narrow-minded beliefs that a woman wouldn’t be suited to more macho styling.

Vance did three films in 1982, and would continue to do at least that many a year over the next decade.

“I just kept going. I did one after the other,” she says. “I didn’t even have time to breathe, I swear to God. I didn’t care, because I was so happy designing. It was a dream come true. I liked that pace.”

Vance is a passionate believer in costume’s ability to build up a character. “You should be able to almost forget the clothes,” she says.

While this may initially sound counterintuitive, she sees character as a stronger force than the fashions of the day. Costumes should “become part of the character and the story and who they are.” She adds, “You don’t want the character to be going around like ‘Look at me, look at my outfit.’” Vance’s costumes may stand out, but they’re also a highly effective piece of cinematic world building that, given its consistency and quality, could easily net her an “auteur” label.

Before there are costumes, there are boards featuring inspirations. While some designers refer to these as “mood boards,” Vance rejects the label. “Please, whatever you do, do not call anything I do a mood,” she says. “It’s character. They’re character boards. They give the personality.”

Vance’s filmography spans a diverse array of genres, and making boards aids in the process of going from one distinct onscreen aesthetic to another. Every genre poses challenges, and Vance has always pushed herself, saying, “You can do this, you can do better.” She also acknowledges that she wouldn’t have been able to do her work without her crews — as with all aspects of filmmaking, audiences can’t necessarily see the amount of intense work that goes into every outfit. As she puts it, even if a costume isn’t totally over-the-top, “A lot of thought goes into everyday people.”

So, with a body of work featuring so many beloved costumes, what’s Vance’s own favorite of her films? She doesn’t hesitate: Streets of Fire, Hill’s gloriously neon-soaked “Rock & Roll Fable” from 1984, is the film she loves most. While not nearly as financially successful as some of the other titles she’s worked on, it’s easy to see why the film is close to her heart. Diane Lane’s red dresses have the perfect blend of hard-rock grit-meets-classic femme fatale styling, and Willem Dafoe’s looks are simply wild in the best possible way. Vance fondly recalls making his signature pair of leather overalls: “He goes in front of the fire, and I wanted it to reflect on his outfit. The patent leather was perfect.”

While many of Vance’s most famous designs are totems of the '80s and '90s, she’s always been careful to not copy the trends of the day.

“On Pretty Woman, everything was made,” as opposed to bought, she says, “because when you’re doing a contemporary film, when it comes out it’s sometimes a year or two after the fashion of the time. You’re already out of fashion so why not be original? I would never copy what was happening at that moment. I didn’t do it with any of the high-school films either. It’s my nature. I like to be original and create those characters. It tells a story.

“You don’t just go running to the store for those contemporary films. I refused to do the big shoulders and other certain things I saw happening. I just knew they were gonna be fads. They’d just depict a certain type of person for five minutes and that’s it, so I went against the grain,” she says.

Looking at Vance’s work years later, this decision paid off — her looks feel simultaneously timely and timeless. By going out of her way to not explicitly follow trends, Vance ended up creating fashions that inspired trends of their own. Her clothes do more than just look cool, and all of her designs are rooted in a powerful belief: “Each character is a walking story unto themselves.”

Thanks in large part to Vance’s work, these are stories that audiences turn to again and again.