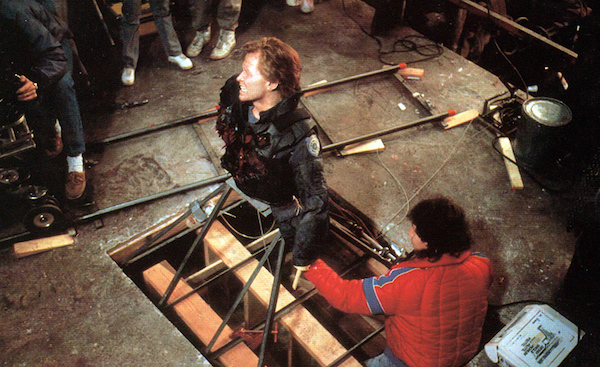 'Robocop': Not real. But really violent.

he subject of violence in movies is a debate as old as the art form itself. In fact, it goes back even further to the days of stage performances from the likes of the Grand Guignol theater, where horrific gore gags became the stuff of legend. Audiences love extreme violence, whether it comes via a bunch of football players giving each other CTE or via John Wick eradicating legions of goons in a knife museum.

We love violence. And you know what? We shouldn’t be ashamed to say so.

There is always a lot of hand-wringing when it comes to how violence is depicted on the silver screen. Growing up during the aftermath of the Columbine shooting, I was exposed to a number of arguments against violence in popular media. The fear is that violent acts will be idolized and replicated in some horrendous fashion. We’ve seen this discourse play out time and time again. The fervor around Joker was the newest riff on this age-old manufactured terror. People were convinced that Joker would usher in a wave of white supremacist attacks. Instead, a surprising opposite effect occurred: Joker popped up at demonstrations against government institutions across the world, a trans-ideological symbol for populist unrest.

And this gets to the core of why violence is such a necessary element to a lot of our movie-going experience: It’s one of fiction’s ultimate catharses. Seeing the Manson Family get brutally demolished by Brad Pitt and Leonardo DiCaprio at the end of Once Upon a Time … in Hollywood isn’t a reflection on the reality we know. Instead, it’s a chance for a storyteller to gather these dark feelings we have attached to the Manson Family and blow them up. This is about grabbing our nightmares and pounding them into submission.

This is especially true when it comes to over-the-top violence. The 1980s were the heyday of unbridled viscera on the big screen. From the many mutilated camp counselors of the Friday the 13th series to the unfortunate suit in Robocop who gets turned into a bloody pulp by ED-209, extreme violence is something that transcends our suspension of disbelief and offers a kind of amplified release.

Here’s a good modern example from a great film: Coralie Fargeat’s Revenge. The story revolves around a woman who is raped, attacked, and left for dead. She survives and takes out her assailants in spectacularly gruesome ways. By the end of the film, the amount of blood that has been shed could fill a small pool: It’s far more grotesque than any actual, standard murder. But, that’s the point. Fargeat exaggerates the violence to such an absurd degree that it mirrors the emotional feelings of the lead character. This is a representation of her revenge. You could easily tell the same story and have the kills be far less bloody, but the level of satisfaction for the protagonist and the audience would be lessened.

It’s disappointing to see the mainstream movie system shy away from extreme violence in favor of sanitized violence for younger audiences. Filmmakers have learned how to exploit the PG-13 rating by adhering to arbitrary rules imposed by the MPAA (Motion Picture Association of America). In case you didn’t know, there are very specific (and sometimes bizarre) criteria that the MPAA utilizes when deciding when violence is "graphic.” Have a hero gun down 30 bad guys but don’t show any blood? That’s PG-13. Have a hero kill hundreds of aliens whose blood isn’t red? That’s PG-13.

This is an argument that’s simply not going to win me any fans, but here it goes: I think the MPAA has it ass-backward. In the essential documentary This Film Is Not Yet Rated, director Darren Aronofsky makes an intriguing proposition: He says that only adults are able to watch things like bloodless slaughter and understand the inherent unrealism of such a display. But with films that attempt to depict realistic violence, that’s something children should be exposed to in order for them to see how affecting violence can really be. I mostly agree with the added stipulation that violence of any unrealistic sort – for example, some face-melting Nazis in Raiders of the Lost Ark – should be made available for younger audiences.

My passion on this topic comes from a personal place. I couldn’t have been any older than 3, and Robocop began playing on cable. My dad was in the room and told me that I could watch it on one condition: I had to understand that it wasn’t real. I told him that I understood, and I got to watch one of the absolute pinnacles of cinematic violence. Thanks to a simple and short discussion with my dad, I was able to grasp that what I was seeing wasn’t “real,” but knowing that didn’t dampen the shock of its carnage. Robocop allowed me to realize that violence could be exciting, shocking, triumphant, distressing, and even downright hilarious.

As I look out at how popular cinema displays violence, especially for children, I worry that those discussions aren’t happening anymore because most movies give off a veneer of safety with how they display violence. It’s why the most successful exercises in cinematic violence are coming from the independent arena: The slow-burn nature of a film like Bone Tomahawk renders its extreme gore all the more shocking.

And we should be shocked by violence. Violence is ugly. Violence isn’t something we should try to tamp down or make palatable. If a story calls for an expression of violence, it should showcase that expression in the fullest way possible. Only by doing so can the audience achieve the intended catharsis. Another modern example of this is the recent remake of Black Christmas. So much of that movie’s intention — its desire to shock the patriarchy into behaving itself better — was undercut by the decision to pull back on the violence. This isn’t simply a matter of wanting gore for the sake of gore. It’s about effective violence being used as a way to hammer home the emotion of a moment. When a character’s corpse is almost revealed but the scene cuts away so we don’t see the brutality of the murder, that lessens the impact for the audience who needs to see just how savage these killers really are. The same goes for when the killers get their comeuppance. We want to see the violence they perpetrated reflected back onto them. When it doesn’t happen because the movie was edited down, the catharsis just isn’t there.

Extreme bloodshed is something very few of us experience in our daily lives. Seeing it enacted in a film can be one of the most memorable, affecting, and even entertaining moments in a movie. And it can also afford us a liberation from our darkest impulses. Fictional violence is not something to bemoan or look down upon. In the hands of good filmmakers and storytellers, it’s one of the greatest creative weapons in an artist’s arsenal. If we want to continue to see good movies, that means we’re going to need good — as in, well-done — violence. It might come across as repulsive to a select few, but for many audiences, it’s the thing they’ll remember the most when they walk out of a theater. It will inspire future creators to figure out how best to utilize it in their stories.

When all is said and done, we need extreme bloodshed in movies because it takes place in a venue that allows us to experience it in the safest way possible. Even then, the best onscreen violence can still feel dangerous and taboo. And by learning how to parse the different effects that fictional violence can have on a viewer, we help to craft better critical appraisals of how violence is utilized in films. A variety of violence makes for better films and better film audiences.

Drew Dietsch has been professionally writing about film and entertainment for over a decade, and he founded and hosts the GenreVision network of podcasts. He's on Twitter at @drewdietsch.