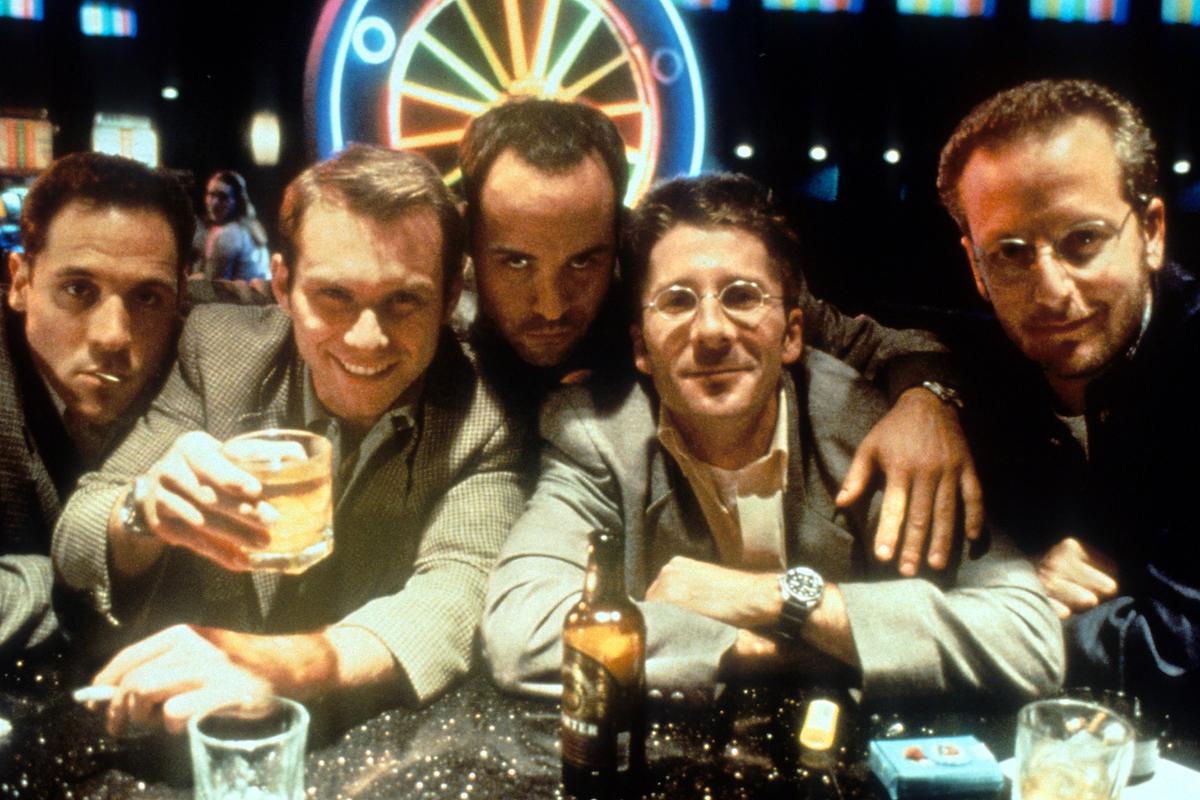 lthough the subgenre has largely dwindled over the past few years (as covered in a fantastic article here on REBELLER), for about the past four decades, one of the most reliable cinematic standbys was the over-the-top bro-comedy. Get together some of the funniest, most charismatic, or at least most recognizable guys in Hollywood, throw a few million dollars and an exciting locale at them, and let them unleash with a series of increasingly dangerous, wacky, and/or sexy high jinks. It’s this formula that gave us such undisputed comic classics as Animal House, The Blues Brothers and essentially everything Bill Murray made between 1979 and the time he hooked up with Wes Anderson. Depending on your perspective, the subgenre was either laid to rest with the Hangover trilogy, perhaps the epochal series of bro-comedies, or it’s just in a period of hibernation/transition as it redefines itself according to the changing tastes of contemporary American moviegoers.

Regardless of its future trajectory, though, it’s interesting how little introspection there was to be had during its heyday. Filmmakers and audiences both just kind of took it for granted that hey, these were guys, and they were going to behave badly and even if they behaved very badly, it was all in the name of a good time. Granted, most of the time, that bad behavior was all in the service of great comedy — humor has long been based around the breaking of taboos and social mores, and it’s hard to imagine a version of Caddyshack that’s still laugh-out-loud if they were treating one another with dignity and respect. By the same token, a lot of the behavior depicted as the source of innocent humor in these movies was … well, a little disturbing. That’s what makes Very Bad Things — recently released by Shout Factory as the latest entry in their Shout Select series — such a great piece of filmmaking: It’s the perfect deconstruction of the responsibility-free bro-comedy, a movie that looks at the real-life consequences of so much “innocent” bad behavior.

Part of the brilliance in Very Bad Things lies in how straight it plays things for its first third: Put-upon everyman Kyle “Fish” Fisher (Jon Favreau) is getting married to beautiful but needy bridezilla Laura (Cameron Diaz), and after much bickering, gets her dispensation to enjoy one final guy’s weekend with his buddies in Vegas. Although her disapproval of his buddies initially seems to be the class snobbery of someone who only wants to spend time with erudite, sophisticated, white-collar types, it quickly becomes apparent there’s more to it: Michael (Daniel Stern) is a weak-willed milquetoast put upon by his domineering wife (Jeanne Tripplehorn) and creepy kids; Michael’s brother, Adam (Jeremy Piven), is a sleazy letch who treats the trip more like his own personal vacation than a celebration of his friend’s nuptials; Moore (Leland Orser) is a sub-verbal weirdo who comes across as more animal than man; and Boyd (Christian Slater) … we’ll never get the full backstory on Boyd, but from what we can gather, a recent trip to a Tony Robbins-style seminar has finally allowed him to unleash his inner alpha and ever since, he’s been one trip in the mountains away from going full Jack Torrance.

As it turns out, that opportunity comes sooner rather than later: On their first night in Vegas, as the guys avail themselves of what seems to be an endless supply of booze and cocaine, Adam takes a stripper, Tina (Kobe Tai), to the bathroom for an impromptu tryst where his eagerness to show her he’s “not what she expected” (a phrase Piven repeats ad nauseum to hilarious effect) culminates in his accidentally impaling her on a coat hook. It proves to be just the moment Boyd has been waiting for to put his newly acquired, assertive personality to the test, and soon the carefree holiday has turned into a blood-soaked quest for survival.

The genius of Very Bad Things is that it allows the audience to think this is going to be a standard bro-comedy for so long before brutally subverting those expectations. For the first 30 minutes or so, all the elements are here for a carefree, sexed-up, guys-weekend-out romp — Fish’s friends are a cornucopia of the character and personality types you’d find in movies like these, and the setup has all the potential to turn this into a pre-Hangover Las Vegas spectacle full of hookers, blow, glitzy lights and crazy set pieces. Instead, writer/director Peter Berg takes a radically different tack, opting instead to take a hard left turn into reality and show us what would happen if any of these guys were real and if they were unleashed into our world. The goofy veneer quickly vanishes, and we rapidly enter a realm of brutal consequences and even bloodier fallout. This is beautifully realized in the slow buildup to the bachelor party: The opening scenes of the film have the look, feel and pacing of a typical goofy '80s comedy, introducing us to Fish and his crazy friends through a series of high-comedy sequences and cutaways that wouldn’t be out of place in a Harold Ramis flick.

Then, we get to the actual bachelor party and the film enters something approximating a cinematic downward spiral. Although the scenes leading up to Tina’s death are shot in the frenetic, club-inspired style of many late-'90s films, there’s a darker undercurrent here as Berg juxtaposes scenes of Tina and Adam having sex, clips of a UFC fight and the guys wrestling in a manner that’s equally suggestive of fun roughhousing and that sort of creepy homoeroticism that sometimes emerges in a group of angry, amped-up guys a little too eager to assert their dominance (lest I be accused of reading too much into things, Boyd later forces Fish to open-mouth kiss him to assert his leadership). It’s a smorgasbord of violent, sexual and violent-sexual imagery that’s aggressively out of place for a wacky comedy and maneuvers us into something approximating the real world where the rest of the film will take place. When the whole set piece culminates with Moore flinging himself through a glass table, it’s not just the table that shatters — it’s the barrier between fun fantasy and cold reality.

It’s a fascinating narrative choice that casts into hard relief the casual “oh you guys” attitude of so many calloused comedies that asked audiences to just sit back and accept even the absolute worst behavior they were seeing onscreen. This isn’t a movie where a sex worker casually gets killed and disposed of — we witness the gruesome aftermath as the men are forced to dismember her corpse in a sequence that’s even more visceral than some horror movies and had me considering whether this was properly a FANGORIA or REBELLER article. I can only imagine what ’90s audiences expecting an edgy comedy thought when the gore levels got amped up to 10.

More interesting is the way Berg deconstructs the various personality types we’re used to seeing in these movies, transporting their idiosyncrasies and peccadilloes into the real world and making them part and parcel of real, deeply flawed, deeply aberrant people. We’re all used to the smarmy, cocksure, “I’ve got this” stock character perfected by Bill Murray and Chevy Chase, and to the extent that they’re fictional characters confined to the screen, they’re fun to spend some time with. What if we had to actually interact with that person, though, and they were a fully-formed human being whose smarminess and arrogance were components of a broader personality? What would that person really be like? We get a pretty good idea with Boyd, for whom all that superficial charisma and smugness is hiding a true psychopath, a guy who refers to a dead woman as “it” and a “105-pound problem,” casually dismissing any closure her friends and family may want from her death. In a subtle bit of characterization, Boyd and Laura — both tan, thin, blonds — give virtually identical speeches at different points in the film regarding the ends justifying the means, indicating that Fish is only trading one toxic relationship for another. Similarly, Michael’s retiring milquetoast goes from comically weak to criminally unstable, his already fragile personality shattering into a sobbing, pitiful mess. There’s a certain Frank Grimes sensibility to the whole thing: Guys like Homer Simpson may be fun to watch on TV, but you wouldn’t want to work with them, and you sure as hell wouldn’t want to party with these guys if any of them were real.

Very Bad Things was dismissed out-of-hand by the bulk of critics upon its release, all of whom — ironically — seemed to watch the film uncritically, panning its mean-spiritedness and darkness while failing to realize that was exactly the point. Thankfully, Shout was wise enough to see the subversive, sly intelligence in a comedy that deserves to be studied and remembered (as well as uncomfortably laughed at). If there’s any justice in this unjust world, Very Bad Things will finally get the reception and recognition it deserves as one of the greatest dark comedies to come out of a period that tried to keep things criminally light.

Special thanks to REBELLER’s Dave Spielman for encouraging me to watch this movie after I told him I’d received a screener; I may not otherwise have taken a peek, and look forward to discussing it with him further when we return to normal conditions!