‘VFW’ and the Pleasures of the Madding Crowd 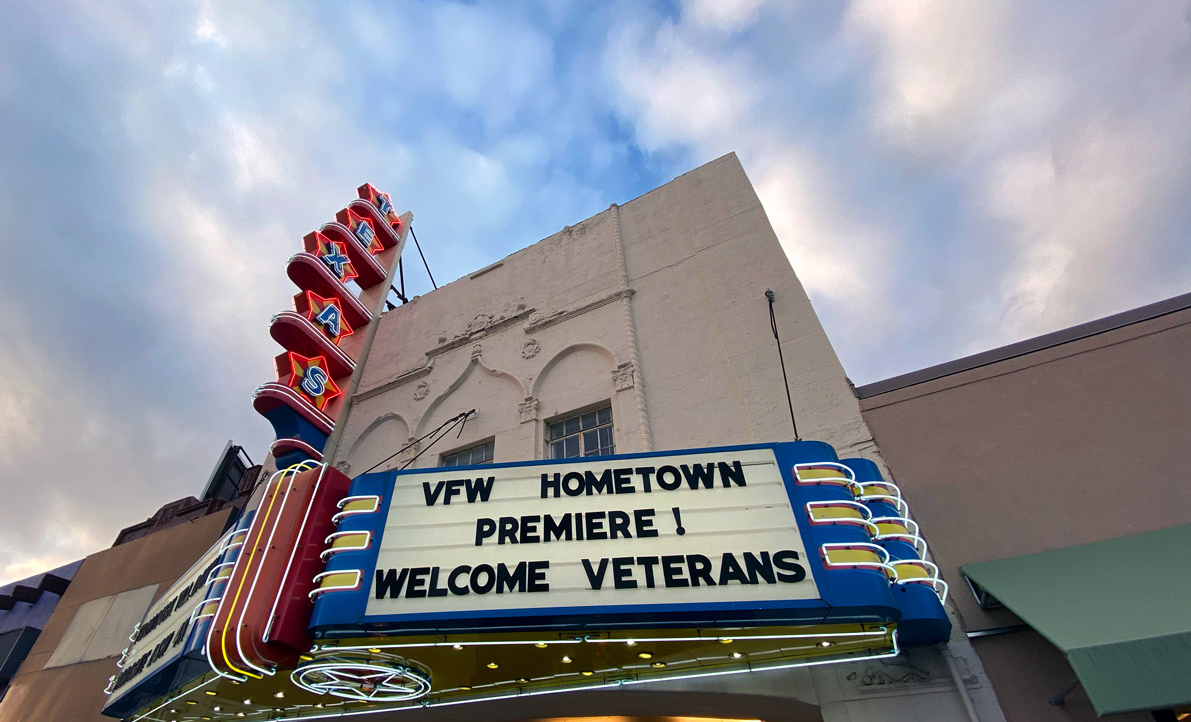 ‘VFW’ and the Pleasures of the Madding Crowd

he first time I came to Dallas (Texas) to talk to Dallas (Sonnier) about joining up with CINESTATE to start REBELLER, the day ended with a screening of the CINESTATE-produced Satanic Panic. It was the Dallas premiere for Chelsea Stardust’s horror-comedy, and the screening was packed with people who had worked on the movie — folks who had held boom mics and offered up their locations for the shoot; actresses who had put their face onscreen for all of us to marvel at — as well as locals looking for a fun night out.

The movie was fine. But the mood was electric. The laughs landed and the thrills chilled. Afterwards, we all spilled out into the lobby of the Texas Theatre to have a few beers and commiserate about what we’ve seen. This is what it means to make mass art, and movies are the artform best designed to be experienced by the masses, with the masses, among the masses. I loved the idea of working for a company committed to bringing that theatrical feeling back to the fore.

I was reminded of that experience last weekend at the Dallas premiere for VFW. Joe Begos’s splatter-filled homage to John Carpenter played well to not only the FANGO-born-and-bred horror fans who love practical effects and throwback synth scores but also the legions of vets who had shown up to support the movie, curious to see what the movie people had put together while taking over their VFW outpost. Heck, even my wife — no horror hound, she — had a great time watching Stephen Lang, Fred Williamson, William Sadler, Martin Kove, and George Wendt (Norm himself!) defend their local bar from murderous hordes of drug-addled freaks.

You don’t have to see VFW in movie theaters, of course: the film is out on VOD now, and you can rent it or buy it on Amazon. Should you go this route — and going this route to VFW is better than going no route to VFW — try to watch it with some friends. Go out and buy a case of Miller or Bud or Coors or a bottle of Jack to pass around the couch, and watch it with folks who love a good practical gag and can appreciate the look of a movie shot with care and lit with a neon-infused madness that calls to mind Mandy by way of Assault on Precinct 13.

But don’t take my word for it! The flick has bipartisan appeal, earning raves from the New York Times (“Riotously scuzzy!”) and Fox News’s Greg Gutfeld (“Charming!”) alike. My pal John DeVore gave it “four jugular spurts” (out of four, one presumes) while my nemesis Andy Levy wrote that it’s “pretty damn close to a perfect genre flick.” Personally, I think the soundtrack deserves more love: if you dig the work of John Carpenter, you’re going to love what Steve Moore has put together. I’ve been listening to it nonstop on Amazon Music and will be deeply tempted to pick up the vinyl when it comes out despite, you know, not actually owning a turntable.

Movie theaters, at their best, are a place for community. A place for coming together and enjoying something in the company of friends and fellow travelers. I put out the call for folks to join me in Dallas over Twitter and was pleasantly surprised to meet in person a handful of people I’ve only interacted with before on social media. Hell, one of them even came dressed as my Twitter avi.

That was, in all honesty, one of the most touching things I’ve ever experienced. And it couldn’t have happened without the movies.

These sorts of interactions are why we’ve seen a resurgence in chains that put a premium on the communal experience, places like the Alamo Drafthouse, where you can have a beer and a bite while watching a movie, joints like the Angelika, where you can mingle before or after your movie in a bar with good beer on tap, palaces like the Arclights, where ushers introduce the movie and make sure rabble rousers keep their phones off. And it’s why independent theaters — like the aforementioned Texas Theatre or Quentin Tarantino’s home base, the New Beverly — have grown in importance and stature, meccas for the masses looking for someplace unique to watch movies new and old.

So watch VFW. Patronize your local theaters. And the next time a CINESTATE production rolls into town, make sure you roll out for it. Because if you don’t show up, we can’t keep bringing these experiences to life.