What the Hell, Jack Hill? A Look Back at the Mess that is 'The Swinging Cheerleaders' 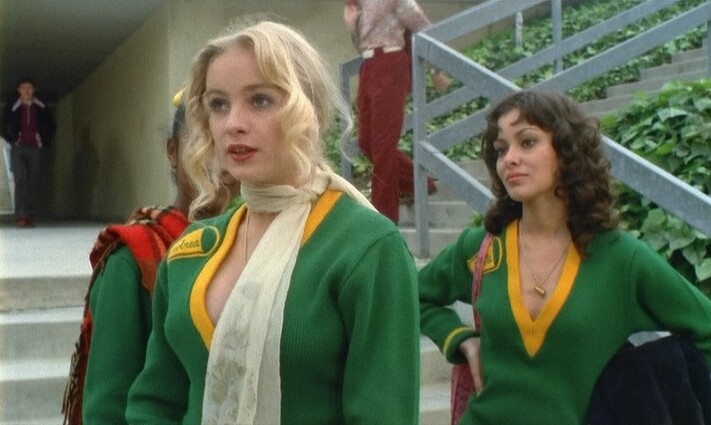 What the Hell, Jack Hill? A Look Back at the Mess that is 'The Swinging Cheerleaders'

ook, everyone is allowed to whiff. From the most accomplished novelist to the most visionary auteur, no artist has a flawless catalog. What’s fascinating, though, is taking a look at what constitutes a great mind’s off-day at their given craft. For some folks, even their lesser efforts still constitute great works of art. I’m no fan of Kubrick’s Barry Lyndon, but I’ll still acknowledge the great technical achievements he made with the film, and while Scorsese’s The Aviator has literally bored me to the point of sleepiness, damn if it isn’t a beautiful film to look at.

And then there’s The Swinging Cheerleaders.

There’s no denying that Jack Hill is one of the most important directors of the exploitation era and that his influence is still felt today. Through his relationship with Pam Grier, he was partially responsible for shattering both the sex and race barriers about who audiences would accept as a lead in an action film, giving cinema some of its first confident, assured, African American female heroines in roles that didn’t define them by their ability to sexually pleasure men. His partnership with Sid Haig helped give grindhouse and horror cinema one of the finest character actors it has ever seen, and some of his movies — notably Spider Baby and Switchblade Sisters — are seminal works of their respective genres. Without Jack Hill, there’s probably no Quentin Tarantino, certainly no Rob Zombie.

He also made The Swinging Cheerleaders.

For a director who was concerned with showing women onscreen in ways they weren’t used to being portrayed, the project makes sense on paper. Ostensibly, Cheerleaders is the anti-sexploitation film, a movie that aims to take the 1970s “ain’t women sexy?” cornpone bro format and flip it on its head. It concerns Kate (Jo Johnston), a journalism student at the fictional Mesa University, who decides to infiltrate the campus cheer squad in order to write an expose on how cheerleading culture is inherently demeaning to women and built around ideas of exploitation and objectification. It’s an interesting setup, one that would be conducive to an intelligent deconstruction of what had already become a worn-out subgenre barely halfway through the decade that had perfected it. Cheerleaders can’t quite bring itself to deliver on its own promise, though, and within 10 minutes, Kate’s thesis is quickly tossed onto the backburner, only to return as a third-act MacGuffin. Instead, she finds herself caught up in the cheeky world of sexual politicking in which the Mesa cheerleaders exist: alpha-chick cheer captain Mary Ann — the spoiled daughter of the football coach — wants to pressure her macho-but-sweet-natured boyfriend, Buck, into marriage; naïve Lisa is engaged in a steamy affair with married statistics professor Torpe; and Andrea seems to suffer from some kind of sexual dysfunction whose psychological origins the script never bothers to explore. These various subplots — and the subplots they inspire — make up the bulk of The Swinging Cheerleaders, with a vague through line involving Mary Ann’s dad being involved in a point-shaving scam.

The film’s biggest flaw is in its utter inability to commit to any one narrative or tonal approach. It wants to be a deconstruction of sexploitation movies without subverting any tropes or undertaking any serious explorations of the topics it addresses; it wants to be a sincere sexploitation film without the sex; it wants to be a sports comedy without any sports or comedy. In trying to be all things to all people, The Swinging Cheerleaders succeeds only in being an empty, soulless mess, with characters that are two-dimensional and shallow even by the standards of a mid-'70s drive-in flick. Much of this comes from the script’s slipshod approach to storytelling: Plot threads are introduced and then immediately abandoned, only to resurface later in the most superficial manner possible, or entire B-stories play out in sequence in the middle of the film rather than being interwoven with the larger narrative.

Take, for example, Andrea’s story arc, which finds her struggling to lose her virginity to her dimwitted boyfriend but choking every time they approach third base. Rather than interweave Andrea’s story with the rest of the subplots going on here, the action of the film abruptly stops about a quarter of the way through for the focus to shift solely onto her travails, as Kate gives her the ill-conceived advice to surreptitiously have sex with a stranger first before returning to her boyfriend as a confident, sexually experienced woman. This leads to Andrea’s hooking up with Kate’s own ex, campus radical Ron (who, in another of the script’s glaring flaws, abruptly shifts gears from supportive boyfriend to creepy date rapist over the course of one scene, resulting in their breakup). After an awkward set piece in which Andrea chugs an entire eight-ounce-glass of vodka, gets mildly tipsy and sleeps with Ron — realizing in the process that she’s sexually adventurous — Ron arranges an off-screen gang rape that culminates in Andrea’s boyfriend pledging his undying devotion to her before laying siege to Ron’s apartment and beating the ever-living shit out of him in one of the film’s few engaging scenes. All of this happens in virtually back-to-back scenes about 20 minutes deep into the film, after which Andrea all but disappears into the background and we move onto the next subplot or set piece. It’s a weird narrative structure that, coupled with the cast’s overall woodenness and the stilted dialogue with which they have been saddled, prevents the audience from becoming invested in any of the characters or what they’re doing. Tellingly, the one moment where the film really shines comes when Professor Torpe’s wife (Mae Mercer), having learned of his affair, confronts Lisa with a switchblade and threatens to mutilate her if she doesn’t bring it to an end. Mercer is in prime Pam Grier mode here, and for a moment, The Swinging Cheerleaders stops being whatever it’s trying to be and shifts into the “dangerous alpha women” territory in which Hill was more comfortable. It’s a stunning few minutes of screen time, and, even if it feels completely out of place, it’s a welcome detour into compelling territory.

The film somewhat gets on track as we approach the climax, which finds Ron kinda-sorta kicking off the third act by exposing Kate as a mole, a plot development that’s relevant for all but 10 seconds and is resolved by Kate essentially saying “yeah, but I was wrong.” This earns her the immediate adoration of the other cheerleaders and allows her to rally them around exposing the point-shaving scandal, culminating in a messy denouement that finds yet another person chugging copious amounts of booze (only to get slightly buzzed), a football player-on-cop beatdown that’s nowhere near as one-sided as it should be (Jack Hill would have you believe a few paunchy dudes in their 50s can hold their own against an entire football squad), a guy getting shot (and walking it off), and a “big game” climax that’s composed of aerial shots of a stadium and freeze-frames of cheerleaders in mid-air as the credits roll and a hokey voiceover assures the audience everything turned out A-OK.

Jack Hill is an important director, who made a lot of important films and influenced the careers of a lot of important stars and filmmakers. The Swinging Cheerleaders is not an important film — quite the opposite. Thanks to the fine folks at Arrow, though, you can see that for yourself in all of the film’s restored anti-glory. If nothing else, it’s a fascinating look at a very confused motion picture from a very brilliant filmmaker at an equally brilliant and confused time in the history of exploitation cinema. If you’re the easy-to-please-sort, you may even get a cheap laugh or two.