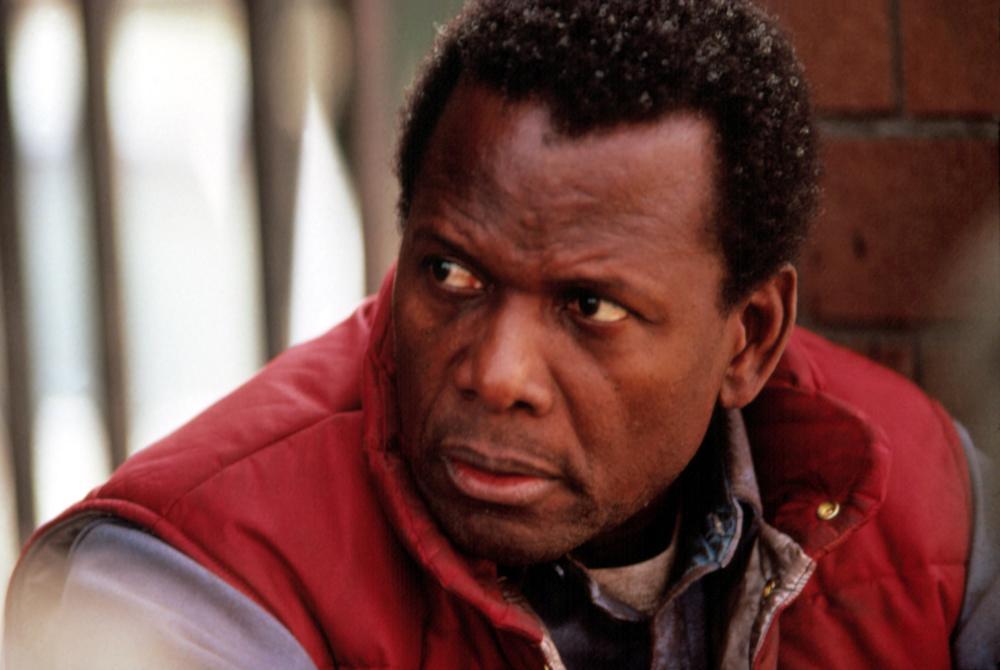 It had been 11 years since Sidney Poitier starred in a film, when he showed up in Roger Spottiswoode’s 1988 action/thriller, Shoot to Kill. It was an odd move for the legendary Poitier, who broke social and cultural barriers on and off the screen for decades and had won an Oscar for Lilies of The Field in 1963. To cease his hiatus with a genre picture slated for an unfavorable late winter release was unexpected, but perhaps Poitier realized there was more substance in Harv Zimmel’s screenplay than there was in most action pictures of the time, in the years and months preceding the arrival of John McClane.

Shoot to Kill is a gripping thriller with a mean streak, an action/adventure with terrific photography, and two fish-out-of-water stories for the price of one. Zimmel’s story (Michael Burton and Daniel Petrie Jr. are also credited as screenwriters) centers on a clever, sadistic jewel thief. As the film opens in the Pacific Northwest, the thief has taken a jeweler’s wife hostage in their home, forcing her husband to break into his own store and bring back a handful of diamonds. Once he trips the store alarm, however, it draws the attention of the local police and the FBI, led by Poitier’s Agent Warren Stantin.

Before long, Stantin and the police are involved in a standoff, followed by a low-speed pursuit, one that ends with a dead housekeeper, a dead wife, and an escaped psychopath with a penchant for shooting his victims in the eye. The killer is headed for Canada, which pulls Stantin out of the city and into the imposing forests along the border as the killer has infiltrated a group of men on a hiking and fishing expedition. The fishing-party guide is Sarah, played with an edge by Kirstie Alley, who was at the peak of her powers in 1988. Stantin teams up with Sarah’s boyfriend, Jonathan Knox (Tom Berenger), a mountain man determined to find her, with or without the help of any tenderfoot G-man from the city.

The film balances Sarah’s story — which quickly devolves into chaos — with Stantin and Knox’s as they try and gain ground on the fishing party. The chemistry between our two mismatched leading men is vital to the picture’s success, and the rapport between an unflappable Poitier and a prickly Berenger is as honest and earned as Nolte and Murphy or Gibson and Glover. That’s clearly the formula at play here, the buddy-cop dynamic, but Shoot to Kill gradually becomes its own piece with its own identity because it’s assembled with intelligence and with some rousing set pieces. A bridge sequence near the middle of the film is a stunner.

Spottiswoode’s film rarely relies on convention and never loses its intelligence. The five hikers under Sarah’s charge are inspired casting, a collection of character actors, many of whom bring their own baggage to the film that helps misdirect any savvy viewers. Andrew Robinson, who plays a hiker named Harvey, was genuinely terrifying as the Scorpio killer in Don Siegel’s 1971 classic Dirty Harry; the mileage this film gets from that performance is enough to ensure he remains a prime suspect. Richard Masur, who plays Norman, had been involved in a similar paranoia-fueled mystery ensemble before this, in John Carpenter’s The Thing, and that didn’t end well for him. And then there is Clancy Brown, at the time a relative unknown who would go on to become an irreplaceable villain in films such as The Shawshank Redemption and the underrated Pet Sematary Two. Let’s not forget Frederick Coffin, best known for playing cops in films like Hard to Kill and Wayne’s World, who could easily be our villain. The gallery is set, and the killer’s reveal happens in a truly chilling scene atop a treacherous cliff.

It may be silly to tiptoe around the identity of a killer in a film that’s 32 years old, but for whatever reason, despite a solid box-office run ($29.3 million against an estimated $15 million budget), Shoot to Kill has quietly drifted out of sight and out of mind, so the surprise isn’t common knowledge. Action enthusiasts and film culture in general were swept away by John McTiernan’s Die Hard, which opened just five months after Shoot to Kill, and the influx of Batman and the superhero genre were just around the corner, ready to squeeze out smaller action flicks and make way for franchises and tentpoles. Shoot to Kill never had the same potential for sequels as Lethal Weapon or 48 Hrs. because the story wasn’t set up to be easily franchised, so it faded.

Shoot to Kill was a Touchstone release, meaning it’s somewhere under the Big Mouse Umbrella and might never see a proper Blu-ray. And its R rating may keep it from the Mouse House’s streaming service. If any forgotten action picture of the ‘80s deserves a clean, crisp audio and visual revival, it’s this one, with its wide-open landscapes and thrilling set pieces. As of now, the only honest way to come about Spottiswoode’s film is via traditional DVD, which is serviceable enough, but rudimentary and lacking any special features. It’s time to give Shoot to Kill, and the once-triumphant return of the great Sidney Poitier, the home-video respect it deserves.

Larry Taylor (@LCTaylor54) is a freelance writer and published author who saw too many R-rated movies at too a young age and never looked back. Books on John McTiernan, Tony Scott, and more to come.‍