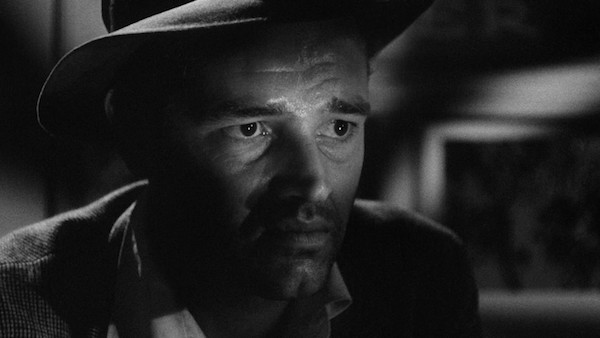 f the fickle hand of fate has a way of furiously pointing throughout film noir, it gets particularly sharp in the short, sweet, gloriously lowdown Detour. The murders in this film are committed almost by karma, particularly the guilty conscience of Tom Neal’s sad-eyed hitchhiker, who has a way of doing very bad things without the benefit of a clue. Detour reminds us that noir is a world defined by guilt. Life isn’t fair, so don’t even bother playing by the rules — not that many in this movie would.

All Neal’s Al Roberts wants is to keep playing the piano for his sweetie Sue (Claudia Drake) at the Break o’ Dawn Club in New York, where their specialty is “I Can’t Believe That You’re in Love With Me.” The song becomes a haunting refrain as the film progresses and the melody makes its way through various permutations. After a while, the tune appears to be mocking Al: Now that you mention it, I can’t believe she’s in love with him, either. But Sue hungers for more. Soon she’s off to try her luck in Los Angeles, and before you can say, “Wait, don’t do it, this can’t end well,” Al is thumbing a ride West in hot pursuit.

Is it a tale of bad luck that Al narrates throughout the film from a grim little Reno club? Maybe. Regardless, the first mug that gives him a ride in a nice car ends up dead, and the shifty dame (Ann Savage) he picks up later knows the nice car doesn’t belong to Al. The cruel part is that Al’s intentions are good, or at least not malicious. The murders he commits are almost comically accidental, the work of life, a case of wrong people in wrong places at wrong times. Warning: When you try to pull a telephone cord out of the wall, be ready for an improbable outcome.

As Al narrates the story from that dingy club, he supplies the shape of the film’s noir stripes. “She looked as though she’d just been thrown off the dingiest freight train in the world,” he says of Vera (Ann Savage), the biggest mistake Al makes in the movie. Vera -- ill-tempered, avaricious, downright mean -- gets her own noir zingers: “We all know we’re gonna kick off someday. It’s just a question of when.” As Al and Vera circle each other, she with his number in her hand, he just wanting to get out of all of this alive, we realize these two were made for each other. The verbal dust they kick up lingers in the air as the film’s highlight.

Detour is one of those B-movies that crossed over into the public imagination and even gained some high-class recognition. It’s a Poverty Row picture that found its way into the Criterion Collection, all 69 minutes of it. It was even enshrined in the National Film Registry of the Library of Congress. David Lynch and the Coen Brothers are among those to pay homage.

But the tributes came from filmmakers more illustrious than that. As Al sweats through an encounter with a cop on the side of the road, haggles with a car dealer, and does his best to conceal an unlikely murder, it’s impossible not to think of Psycho, which came out some 15 years later. Psycho, in its own way, was a tribute to B-movies, complete with buckets of blood. Detour was the real thing.

There’s something casual about the way Haskell, who picks up the hitchhiking Al in Arizona, explains the dirt he’s done. Yeah, so I once took out a kid’s eye. Big deal. Then there are those big, puffy scratches on his arm, a precursor to the trouble up ahead for Al. “There oughtta be a law against dames with claws,” Haskell mutters, further establishing himself as a despicable (if peripheral) character.

The top-of-the-line bad guys and girls in Detour tend not to be so bad all; even Vera, for all her venom, has too much gusto to be a real villain. Al notes a certain rough beauty when he first spots her, before he realizes she’s got him by the walnuts. He’s right. She provides the movie’s flavor.

Hungarian-born director Edgar G. Ulmer knew how to stretch a dollar; it’s not that Detour looks like a million bucks but it looks like at least $200,000, even with all that rear projection proclaiming its cheapness. More priceless is the sense that life doesn’t give a damn, and that it’ll get you in its gears and grind you to a nub. Have a safe Detour.

Chris Vognar is a writer in Texas.